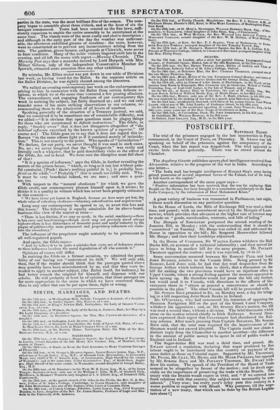 On the 1;t11 at Barmaid, Lanarkshire, the Lady of Lieut.-Col. HALL, of a son . In Manelte,ter Street. the Lady of 11Nor CHARLES HUM of a son. Oct the 26th inst., at the Rectory House, Newington Butts, the Wife of the Rev. RICITARD SIIUM, M.A., of a SOIL

On the 27th lust., at St. George's, Hanover Square, the Lord Bishop of SALVOR:RE, to LOUISA, second daughter of the late Henry Kin' Seytner, Esq., of Hanford, in the county of Dorset.

On the 25th inst., at the parish-church of St. Giles-in-the-Fields, the Rev. G. A. SEL- WYN. Fellow of St. John's College, Cambridge, to SARAH HARRIET, only daughter of

Sir John Richardson, late one of Justices of the Court of Common Plea..

On the 23d inst., in London, after a short but painful illness, Liettlenant-Celonel CLARKE, of Portland Square, Bristol, late of the 66th Regiment, in his 71st year. On the 19th inst., time Rev. HENRY THOMAS JONES, Rector of Jackley and Vicar of West Peckham, formerly fellow of St. John's College, Oxford. On the 29th inst., at 13attersea Rise, the Rev. CHARLES THORSTON, yOUllgeld son of the late Henry Thornton, Esq. On the 2581 inst., MARY, Relict of the late Lieutenant Colonel Huxley, and sister of the late Right Hon. Lord Chief Justice Dallas and Si; George Dallas, Bart. On the 20th ult., after an illness of a lbw hours, at Stertzingen, in the Tyrol, on her journey. from Rome to Kissengen, Mrs. Cummitto nee de GERSOORE. Widow of Patrick Cumming, Esq., of East Cliff Lodge, iii the Isle of Thcanet, and of Riga. On the 4th ult., at Barnes Hall, its Yorkshire, the seat of W. Smith, Esq., Nu. SARAH Boom. Relict of William Booth, Esq., of Brush House, in her 85th year. Oct the 20th inst., HENRY, only son of the Rev. J. Rush, Chelsea, in Ins 26th year. He was drowned by the sinking of his boat in a squall, near Battersea Bricige. Ott the 21st inst., accidentally drowned, with three of his young friends, JOHN WELLS LAMBE, eldest son of Mr. Jelin Lambe, of Cockspur Street, tu his 29th year. On the tOth lust., by the accidental upsetting of a boat, JOHN WOULLEY, Esq., ja his 34th year, many years one of the Hon. Corps of Gentlemen at Arms. On the 15th inst., at Caversham, Oxon, Mr. JOHN ARMSTRONG, in his 82d year. At Guildford, Mr. WILLIAM RUSSELl., in his 93d year. At Oxford, JOHN IRELAND, Esq., M.D., in his 95th year.