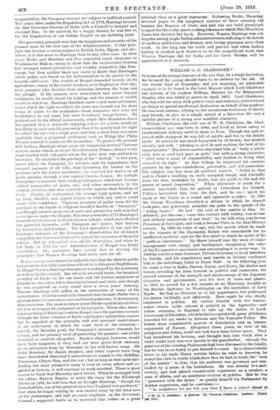 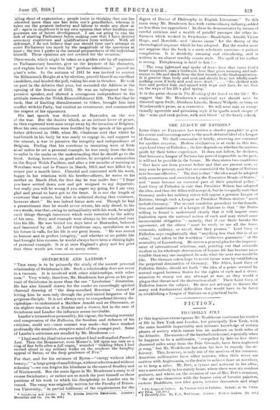 IT is one of the strange features-of the war that, by a tragic inversion, the Lives of the young should have to be written by the old. Of this recent kind of biography, sad yet inspiring, an admirable example is to be found in the brief Memoir which- Lord Gladstone has written of his nephew William, Member for the Kilmarnock Burghs, who was killed in action in April, 1915. Lord Gladstone, who has told the story with perfect taste and restraint, puts forward no claims to special intellectual distinction on behalf of his nephew. He has been content, relying on the unanimous testimony of family and friends, to give us a simple record of a blameless life and a faithful picture of a strong and unselfish character.

William Gladstone, the only son of W. H. Gladstone, Mr. Glad- stone's eldest son, was- born in 1885, and lived at home owing to constitutional delicacy until he went to Eton. Though shy and re- served with strangers, he was full of spirits and fun in the family circle. At school he was much hampered by ill-health, but worked steadily and well, refusing to give in and making the best of his opportunities." His house-master described him as " truly a gentle soul, true as steel and pure as gold," but with a strong character, filled with a sense of responsibility and fearless in doing what

seemed to be right." At New College he impressed his contem- poraries by his open-mindedness, generosity, and self-possession His religion was free- from all spiritual conceit. " Belief in God and in Christ's teaching on earth accepted simply and naturally from the first, unshaken by doubt, was his guide in life and the source of moral inspiration." When allowance is made for a certain inevitable bias, he arrived at Liberalism for himself. Politics interested him from the first, and he sooe made his mark at the -Union as a sound and agreeable speaker. In 1906 Mr. George Wyndham described a debate in which he himself took part, and generously awarded. the palm to the speech of the " young Squire." He had " the root of the matter in him. He debated; put his case ; came into contact with reality, was at ease and without mannerism of any kind." In the following year he was President of the Union., and took a Second Class in. the final History schools. In 1906 he came of age, and the speech which he made to the tenants of the Hawarden Estate was remarkable • for its unaffected modesty, and for the fine spirit in which he spoke of his " perilous inheritance." He threw himself into the work of estate management with energy and intelligence, recognizing the value of the Co-operative movement and encouraging it in every way. In 1909 he was for a time Assistant Private Secretary to Lord Aberdeen in Dublin, and his experiences and travels in. Ireland confirmed him. in his hereditary belief in Home Rule. In the following year he made a tour in India, Burma, Japan, and Korea, his diaries and letters revealing his keen interest in politics and economics, his shrewd estimate of the strength and shortcomings of the Japanese character and government, and his. love of trees and plants- In 1911 ha served for a few months as an Honorary Attaché at the British Embassy in Washington on, the invitation of Lord Bryce. He had no illusions as to his importance, but performed hie duties faithfully and efficiently. Here- again he was chiefly interested in politics. He visited Canada with the Ambas- sador—whose noble tribute is printed in the Appendix—and before returning to 'England to take up the duties of Lord- Lieutenant of Flintshire, which he had aeceptedwith great diffidence, travelled for six weeks in Arizona and the Yosemite Valley. His letters show considerable powers of description. and an intense enjoyment of Nature. Altogether these years, in. view of his prospects and duties, could not well have been better spent. They had broadened his horizon, and brought him into touch with a wider world than was ever known to his grandfather. Already the question of his entering Parliament had been discussed in the family, but he was in no hurry to put himself forward. In a. characteristic letter to his uncle Henry written before he went to America, he stated his view in words which show that he had, in troth, the " root of the matter " in him, that his ambition was governed and con- trolled by a sense of his limitations. He was already five-and- twenty, and had gained considerable experience as a speaker, a man of affairs, and an. assiduous student of politics. But he was " possessed with the desire " to qualify himself for Parliament by further experience, and .he continuese- " In confidence let me tell you that I have a GREAT dread- ol.

0-1C G. C. °W ham er-Metwoir. By Viscount Gladstone. londowt Nisbet 154. net.] !ailing short of expectation ; people insist in thinking that one has inherited more than one has from one's grandfather, whereas it takes me the greatest industry and labour to make any show at ail : again in confidence it is my own opinion that what faculties one possesses are of latent development. I am not going to run the risk of starting Parliament before making sure that I have derived necessary experience and qualifications from without. With all deference, I do not believe that one should time one's attempt to enter Parliament too much by the magnitude of the questions at issue ; the test I prefer is the mental preparedness of the individual himself. These opinions are not created for the occasion."

These words, which might be taken as a golden rule by all aspirants to Parliamentary honours, give us the keynote of his character, and explain how it was that his " perilous inheritance " proved no biant's robe. In the autumn of 1911 he was invited to contest the Kilmarnock Burghs at a by-election, proved himself an excellent candidate, and headed the poll, taking his seat in October. He took no part in the debates that year, but seconded the Address at the opening of the Session of 1912. He was an infrequent but im- pressive speaker, and showed a courageous independence in his attitude towards the Welsh Disestablishment Bill. The line that he took, that of limiting disendowment to tithes, brought him into conflict with his Party, but excited no resentment, and commanded the respect of his opponents.

His last speech was delivered at Hawarden on the eve of the war. But the doubts which, as an intense lover of peace. he then expressed were soon swept away by the invasion of Belgium. Here his own convictions were fortified by the speech of his grand- father delivered in 1880, when Mr. Gladstone said that whilst he had breath in his body he was ready to engage in, and support to the utmost, a war to preserve the integrity and independence of Belgium. Feeling that his exertions in recruiting were of little avail unless he set a personal example, he was ready from the first to enlist in the ranks on the understanding that ho should go to the front. Acting, however, on good advice, he accepted a commission in the Royal Welsh Fusiliers, and after a few months of training at Wrexham went out to France in March, 1915, and was killed by a sniper just a month later. Cheerful and contented with his work, happy in his relations with his brother-officers, he wrote to his mother on March 23rd, the first day he was under fire: " I hope you have settled down now and got resigned to my departure, but really you will be wrong if you regret my going, for I AM very glad and proud to have got to the front. It is not the length of existence that counts, but what is achieved during that existence, however short." He was indeed laetuet sorte suet. Though he had a presentiment that he would never return, his only dread, in his own words, was that, owing to unfamiliarity with his work, he might omit things through innocence which were essential to the safety of his men. Duty and example were always in his mind, and cost him his life. He was buried ten days later at Hawarden, beloved and lamented by all. As Lord Gladstone says, speculation as to his future is vain, for his life is our great lesson. " He was rooted in honour and in perfect integrity," and whether or no public life had brought him success, he would always have been a shining light of personal example. It is at once England's glory and her grief that these words are true of so many others.