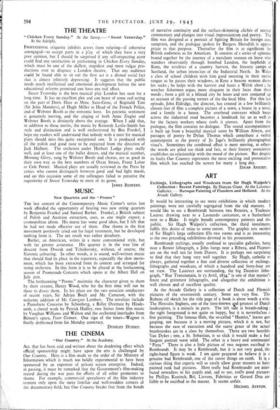 New Quartets and the " Proms "

THE last concert of the Contemporary Music Centre's series last week afforded the opportunity of hearing two new string quartets by Benjamin Frankel and Samuel Barber. Frankel, a British subject of Polish and Austrian extraction, uses, as one might expect, a cosmopolitan idiom. His music has some good ideas, but I felt that he had not made effective use of them. One theme in the first movement positively cried out for fugal treatment, but he developed nothing from it. The net result was rather desultory.

Barber, an American, writes in a more conventional style, but with far greater assurance. His quartet is in the true line of descent from Dvorak and Tchaikovsky, without, of course, the Slavonic colouring. In other words, it is sound, well-written music that should find its place in the repertory, especially the slow move- ment, which has been extracted from its context and arranged for string orchestra. In this form it is to be played at the forthcoming, season of Promenade Concerts which opens at the Albert Hall on

The forthcoming "Proms." maintain the character given to them by their creator, Henry Wood, who for the first time will not be there to direct them. In his place are the two associate conductors of recent years, Sir Adrian Boult and Mr. Cameron, with the welcome addition of Mr. Constant Lambert. The novelties include a Pianoforte Concerto by Sch8nberg, a Ballet Overture by Hinde- mith, a choral work by Patrick Hadley, two Suites from film music by Vaughan Williams and Walton and the orchestral interludes from Bsitten's opera, Peter Grimes. One sign of the times—Wagner is finally dethroned from his Monday autocracy.