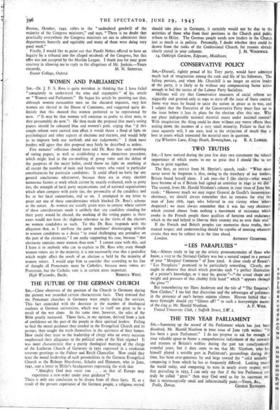 THE FUTURE OF THE GERMAN CHURCH

Snt,—Close observers of the position of the Church in Germany during the present war recorded certain characteristic facts. They stressed that the Protestant churches in Germany were empty during the services. This fact coincided with the decrease in the number of theological students at German universities, which was in itself too great to be a result of the war alone. At the same time, however, the ,sales of the Bible greatly increased. Those facts, in my opinion, derived from a lack of confidence on the part of the people in their spiritual leaders. Failing to find the moral guidance they needed in the Evangelical Church and its pastors, they sought the truth themselves in the quietness .of their homes. How could they trust to the leadership of clergy who on every occasion emphasised their allegiance to the political aims of the Nazi regime? It was most characteristic that a purely theological meeting of the clergy of the Lutheran Church of Germany in 1935 expressed in a reiolution reverent greetings to the Fiihrer and Reich" Chancellor. How could they trust the moral leadership of such personalities in the German Evangelical Church as the Bishops Marahrens Schultz and Hymmen, who in June, i941, sent a letter to Hitler's headquarters expressing the wish that

"Almighty God may assist you . . . so that all Europe may experience a new order under your guidance "?

There is only one conclusion to be drawn from all these facts. If; as a result of the present experience of the German people, a religious revival should take place in Germany, it certainly would not be due to the activities: of those who from their positions in the Church paid pithlic tribute to Hitler. The German people needs new leaders in the Church just as much as in politics. Personally, I doubt whether they could -be drawn from the ranks of the Confessional Church, for reasons already