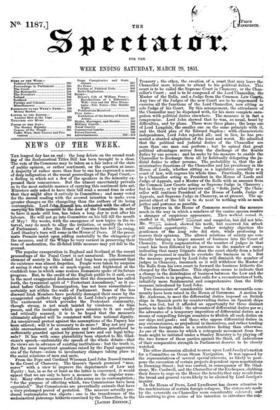 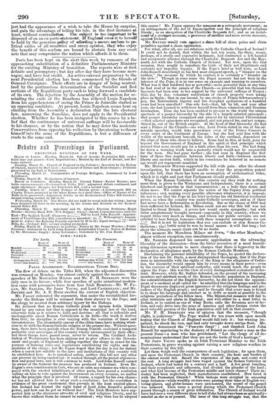 Tim longest day has an end : the long debate on the second read- ing of the Ew..1. esiastioal Titles Bill has been brought to a close. The vote of the Commons may be taken as a fair index of the state of public opinion, or rather sentiment, on the question at issue. A majority of rather more than four to one has expressed a sense of deep indignation at the recent proceedings of the Papal Court,— a feeling in which not a few of the speakers in the minority ex- pressed their concurrence. But the utmost uncertainty .prevails as to the most suitable manner of carrying this sentiment into ad. Ministers only asked to have their bill read a second time in order that they might alter it entirely in Committee ; and many voted for the second reading with the avowed intention to make even .greater changes on the changeling than the authors of its being contemplate. Lord Solo. llama too, exhausted with the effort of carrying his little measure to the door of the Committee in order to have it made still less, has taken a long day to rest after his labours. He will not go into Committee on his bill till the month Of May Six weeks, with the emergence of new topics in the in- terval, may do much to allay the irritation, or modify the views of Parliament. After the House of Commons has had Its swing, Lord Stanley's tarn will come in the House of Peers. If the proxi- mate Premier insist upon adding materially to the stringency of the measure, and if the Whigs be very earnest in preserving their tone of moderation, the ill-fated little measure may yet fall to the ground.

The popular exasperation in England and Scotland at the recent

pro gs of the Papal Court is not unnatural. The Romanist element of society in this island had long been so quiescent that its existence was almost forgotten. People were taken by surprise at seeing it start up with so much vigour, and frightened at the confident tone in which some zealous Romanists spoke of its future progress. But, to the credit of the English public be it said, even m the most exaggerated declamation that the discussion has called forth, the tyrannical spirit of " Protestant Ascendancy," as it ex- isted before Catholic Emancipation, has not been resuscitated— certainly not within the walls of Parliament. Some of the less discreet Irish Members have probably damaged their cause by the exaggerated epithets they applied to Lord. John's petty provisos. The excitement which pervades the Protestant community, though strong, is not much tainted by virulence. As time passes, and the incidents which gave occasion to it are coolly and critically scanned, it is to be hoped that the measures siltimately adopted will be consistent with true national dignity. An unequivocal protest against the assumptions of the Papacy has been uttered; will it be necessary to do more ? May not any pos- sible encroachment of an ambitious and insidious priesthood be sufficiently guarded against by general laws and our legal tribu- nals? It has with some plausibility been objected to Mr. Glad- stone's speech—undeniably the speech of the whole debate—that its views are in advance of existing institutions : but the truth is, that the most important questions raised by the Papal aggression are of the future—relate to involuntary changes taking place in the social relations of men and sects.

From the Pope and Cardinal Wiseman Lord John Russell turned to the Court of Gliancery.. The Queen's Speech promised " mea- sures" with a view to improve the departments of Law and Equity •, but, in so far at least as the latter is concerned, it would appear that we are only to have a measure in the singular num- ber. Many other measures Lord John avers are in contemplation ; "for the purse of effecting which, two Commissions have been appointed.' But Commissions are proverbially animals that have a very prolonged period of gestation. The measure actually pro- Awed contemplates two objects : one is the transference of the ecclesiastical patronage hitherto exercised by the Chancellor, to the ' Treasury ; the other, the creation of a court that may leave the Chancellor more leisure to attend to his political duties. This court is to be called the Supreme Court in Chancery, or the Chan- cellor's Court ; and is to be composed of the Lord Chancellor, the

Master of the Rolls, and a Judge from the Common Law Co Any two of the Judges of the new Court are to be emPowered to exercise all the functions of the Lord Chancellor, now sitting as

sole Judge of his Court. By this arrangement, the attendance of the Chancellor may be dispensed with, for his more complete emu-

potion with political duties elsewhere. The measure is in feet a compromise. Lord John showed that he was, as usual, beset by difficulties, and by plans. There were three plans ; the large one of Lord Langdale, the smaller one on the same principle with it, and the third plan of Sir Edward Sugden : with -characteristic independence, Lord John rejected all ; and in lieu, he has pre- sented a stunted adaptation of the least and worst. He admitted that the political and judicial duties of the Chancellor are more than one man can perform ; but he opined that great political advantages accrue from the discharge of the double duties by one person ; and he seeks by his measure to enable the Chancellor to discharge them all by habitually delegating the ju- dicial duties to other persons. The probability is, that the ad- ministrative functions of the Chancellor and his presidency in the House of Lords, whether sitting as a legislative assembly or a court of law, will engross his whole time. Practically, there will, be a Chancellor acting as President in the House of Lords and Judge of Appeals, and a Master of the Rolls with an assessor from the Common Law Courts acting as Supreme Judge in Chancery ; but in theory, or by what lawyers call a " fiotio prig," the Chan- cellor will continue President of the House of Lords, Judge of Appeals, and Supreme Judge in Chancery, as at Present. The ap- parent object of the bill is to do next to nothing with as much pother and pretence as possible. The lawyers in the House of Commons received the measure much in the way in which a conclave of the canine species receive a stranger of suspicious appearance._ Thev_wslar...) snuffed at it, ind_icatti.-Ifistrust and suspicion, but did not bite. Mr- indeed, showed his teeth, but reserved his attack till another opportunity. One rather weighty objection the gentlemen of the long robe did state, while professing to reserve their opinions. The altered relations of society are con- tinually bringing a larger amount of business into the Court of Chancery. Every augmentation of the number of judges in that court has been followed by an increase in the number of cases ; indicating that many litigants shun the court chiefly from a belief that its personnel is unable to overtake the business in it. But the measure proposed by Lord John will diminish the number of judges in Chancery, inasmuch as it will withdraw the Master of the Rolls from his own court to forward the business hitherto dis- charged by the Chancellor. This objection seems to indicate that a change in the distribution of business between the Law and the Equity Courts is in progress, that calls for a reconstruction of both, infinitely more fundamental and comprehensive than the little measure introduced by Lord John.

Two discussions of considerable interest to the mercantile com- munity have been raised in the House of Commons. A motion by Mr. Anderson, to meet the differential duties imposed on British ships in Spanish ports by countervailing duties on Spanish ships here, was lost, but it afforded an opportunity for three distinct parties to take the field: the advocates of differential duties per se ; the advocates of a temporary imposition of differential duties as a means of compelling foreign countries 01,10118h all such duties on our ships and goods ; and those who oppose differential duties in any circumstances, as prejudicial in themselves, and rather tending to confirm foreign states in a restrictive feeling than otherwise. As one of the means by which a retrograde movement from free trade might be initiated under a Stanley Ministry is by playing off the two former of these parties against the third, all indications of their comparative strength in Parliament deserve to be closely watched.

The other discussion alluded to arose upon Lord Jocelyn's motion for a Committee on Ocean Steam Navigation. It was opposed by the representatives of several special interests, as likely to post-. pone the execution of certain projects dependent upon negotiations in Downing Street ; but was carried, in oonsequence of Mr. Glad- stone, Mr. Cardwell, and the Chancellor of the Exchequer, clubbing their forces to urge on the House the ;benefits that may result from the broad and general views likely to be elicited by Lord Jocelyn's inquiry. In the House of Peers, Lord Lyndhurst has drawn attention to the machinations of certain foreign refugees. The statements made, by the venerable ex-Chancellor seem considerably coloured ; -and, his omitting to give notice of his intention to introduce thetinki-,

ject had the appearance of a wish to take the House by surprise, and gain the advantage of telling his tale, in the first instance at least, without contradiation. The subject is- too important to be disposed of on an ex-parte statement. If England owes-it to herself to hold by the generouspolicy of affording anecure al ylum to IJO- litical exiles of all eountries and every opinion, they who enjoy the benefit of this asylum are bound to abstain from any overt acts that may compromise the nation which affords it to them.