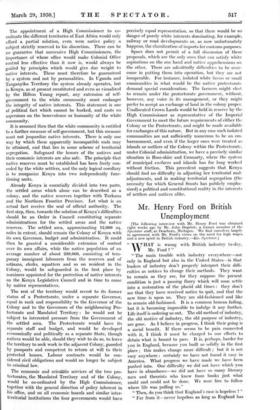 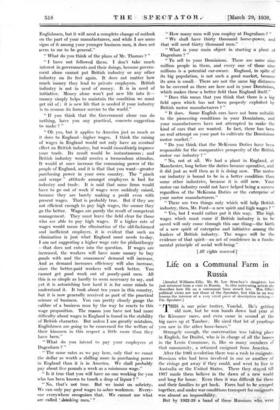 [The following interview with Mr. Hem", Ford was obtained eight weeks ago by Mr. John Dugdale, a former member of the Spectator staff, at Dearborn, Michigan. We find ourselves largely in agreemeht with Mr. Ford's views on the need for high wages and a new spirit in British industry.—En. Spectator.J WHAT is wrong with British industry to-day, Mr. Ford ? " " The main trouble with industry everywhere----not only in England but also in the United States—is that leaders of industry don't properly interpret their diffi- culties as notices to change their methods. They want to remain as they are, for they suppose the present condition is just a passing flurry which will soon settle into a restoration of the placid old times : they don't see that they have received notice to quit, and that the new time is upon us. They are old-fashioned and like to remain old-fashioned. It is a common human failing, but it is becoming impossible to indulge it any further. Life itself is ordering us out. The old method of industry, the old motive of industry, the old purpose of industry, are gone. As I believe in progress, I think their going is a social benefit. If there seems to be pain connected with it, I think it must be charged to our efforts to detain what is bound to pass. It is, perhaps, harder for you in England, because you built so solidly in the first place ; this makes change more difficult ; but it is not easy anywhere : certainly we have not found it easy in America. What progress we have made we have been pushed into. One difficulty we did not have which you have in abundance—we did not have so many literary men and theorists who knew from books just what could and could not be done. We were free to follow where life was pulling us." " Then, do you think that England's case is hopeless ? " Far from it—never hopeless as long as England has Englishmen, but it will need a complete change of outlook on the part of your manufacturers, and while I see some signs of it among your younger business men, it does not seem to me to be general."

" I have not followed them:- I don't : take much interest in governments and their doings, hecause govern- ment alone cannot put British industry or any other industry, on its feet again. It does not matter how much money they lend to private employers. British industry is not in need of money. It is in need of initiative. Money alone won't put new life into it-- money simply helps to maintain .the condition we must get rid of ; it is new life that is needed if your. industry is to resume its former service to the world."

• " If you think that the._ Government alone can do nothing, have you any practical, concrete suggestion to make ? "

" Oh yes, but it applies to America just as much as it does to England—higher wages. I think the raising of wages in England would not only have an eventual effect on British. industry, but would immediately improve your trade. Its result would be instantaneous ; and British industry would receive a tremendous stimulus. It would at once increase the consuming power of the people of England, and it is that that you want—greater purChasing power in your own country. The " pinch and scrape " attitude amongst employers is bad for induStry and trade. It is said that some firms would have to go out of work if wages were suddenly raised, because they are barely making a profit even with present wages. That is probably true. But if they are not efficient enough to pay high wages, the sooner they go the better. Wages are purely the result of competent management. They must leave the field clear for those who are able to pay high wages. If a higher rate of wages would mean the elimination of the old-fashioned and inefficient employer, it is . evident that such an elimination is just what England most needs to-day. I am not suggesting a higher wage rate for philanthropy —that does not enter into the question. If wages are increased, the workers will have more money to buy goods with and the consumers' demand will increase, And as demand increases efficiency will also increase, since the better-paid workers will work better. You cannot get good work out of poorly-paid men. All this is so simple as hardly to seem necessary to say, and yet it is astonishing how hard it is for some minds to understand it. It took about ten years in this country, but it is now generally received as part of the practical science of business. You can pretty closely gauge the calibre of a business man by the way he reacts to this wage proposition. The reason you have not had more difficulty about wages in England is found in the stability of British character. But unless I am greatly mistaken, Englishmen are going to be concerned for the welfare of their kinsmen in this respect a little more than they have been."

" What do you intend to . pay your employees at Dagenham ? "

" The same rates as we pay here, only that we count the dollar as worth a shilling more in purchasing power in England than it is in America. We shall probably pay about five pounds a week as a minimum wage."

" Is it true that you will have no one working for -you who has been known to touch a drop of liquOr " " No, that's not true. But we insist on sobriety. We can only pay good wages to sober workmen. Every. one everywhere recognizes that. We cannot use what are called `.darinking men.' " ".How many Men will you employ -at Dagenham.? "

" To sell to your Dominions.. There are some nine million- people in them, and every -one of- those nine- millions is -a - potential car-owner. England, in spite • of its big population, is not such a good .market, because its area is small. - There are not- the same big distances to be covered as there are here and in your Dominions, which makes these a better field than England. itself." • " Does this mean that you -think that there is • a big field open which has not been properly. exploited by British motor manufacturers ? "- .

" It does. Some English cars have not been - suitable to the pioneering conditions in your -Dominions, and your manufacturers have not attempted to make the kind of cars that are wanted. In fact, there has been no real'attempt on your part to cultivate the Dominions motor market." • " Do you think that the McKenna Duties have been responsible for the comparative prosperity of the British motor car industry ? "

" No, not at all. We had a plant in England, at Manchester, long before the duties became operative, and it did just as well then as it is doing now. The motor car industry- is bound to be in a better condition than some other industries, because it is still new. Your motor car industry could not have helped being a success regardless of the McKenna Duties or the enterprise of your motor manufacturers."

" There are two things only which will help British industry, then, Mr. Ford—a new spirit and high wages ? "

" Yes, but I would rather put it this way.- The high wages which must come if British industry is to be saved will only come through this one thing—the birth of a new spirit of enterprise and initiative among the leaders of British industry. _ The wages will be the evidence of that spirit—an act of confidence in a funda- mental principle of social well-being."