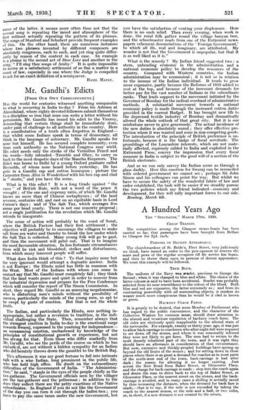 [FROM OUR OWN CORRESPONDENT.]

ths the world for centuries witnessed anything comparable to what is occurring in India to-day ? From his Ashram at Ahmedabad, where eighty devoted followers submit themselves to a discipline so iron that none can write a letter without his permission, Mr. Gandhi has issued his edict to the Viceroy, demanding that certain things shall be immediately done, under pain of challenge to all authority in the country. Here is a manifestation of a truth often forgotten in England— that whilst some Indians speak in terms of democracy, all think in the language of autocracy. Mr. Gandhi speaks for none but himself. He has secured complete immunity, even from such authority as the National Congress may wield. His edict needs only the stroke of the Vermilion Pencil and the words—fully intended—Tremble and Obey, to carry us back to the most despotic days of the Manchu Emperors. The Edict was borne to Delhi by a young Oxford graduate called Reynolds, of whom none heard before yesterday. He has gone in a Gandhi cap and cotton homespun ; picture the Carpenter from Alice in Wonderland with his box cap and clad in shorts," and you have the scene.

What is in this edict ? It is a long tirade against " the curse " of British Rule, with not a word of the peace it wrought ; of the one and sixpenny ratio, of which Mr. Gandhi knows no more than of Chinese metaphysics ; of the land revenue, centuries old, and cast on an equitable basis in Lord Curzon's days ; and of The Salt Tax, which averages five annas per head yearly. There is not one concrete proposal not a single justification for the revolution which Mr. Gandhi intends to inaugurate.

The scene of action will probably be the coast of Surat; where the British Factors had their first settlement ; the objective will probably be to encourage the villagers to make salt from sea water and thereby to break the law under which the Salt Tax is collected. Many young folk will go to gaol, and then the movement will peter out. That is to imagine the most favourable situation. In less fortunate circumstances there will be riot and bloodshed, strikes and disturbances, from which many innocent people will suffer.

What does India think of this ? To that inquiry none but the very ignorant would attempt a dogmatic answer. India is not Europe ' • the Hindu mind has little in common with the West. Most of the Indians with whom you come in contact say that Mr. Gandhi must completely fail ; they think that the land wants peace and quiet in order to recover from the industrial depression and prepare for the Free Conference which will consider the report of The Simon Commission. In short, they regard Mr. Gandhi as an annoying megalomaniac, who is disturbing men's minds without the possibility of success, particularly the minds of the young men, so apt to be swept by gusts of emotion. But that is not the whole truth.

The Indian, and particularly the Hindu, sees nothing in- appropriate, but rather a reversion to tradition, in the indi- vidual challenging the State. Then, remember always that the strongest emotion in India to-day is the emotional surge towards Swats], expressed in the yearning for independence— an unreasoning emotion, unchastened by knowledge of the principles of constitutional growth or experience, but not less strong for that. Even those who differ markedly from Mr. Gandhi, who see the' perils of the course on which he has embarktd, are not without a hidden sympathy for an Indian who deliberately throws down the gauntlet to the British Raj.

This afternoon it was my good fortune to fall into intimate talk with a wise Indian, long prominent in the public life, who has held high office. He dwelt on the extraordinary difficulties of the Government of India. " The Administra- tion," he said, " stands in the eyes of the people chiefly as the tax-gatherer. The Government officials seen by the villager are the tax-gatherer and the policeman ; in addition to the dues they collect there are the petty exactions of the Native subordinates. In England if you do not like the Government of the day you can turn it out through the ballot-box ; you have to pay the same taxes under the new. Government, but

you have the satisfaction of venting your displeasure. Here there is no such relief. Then every evening, when work is done, the rural folk gather round the village banyan tree, and the schoolmaster reads from one of the Extremist news- papers vehement denunciations of the ` Foreign Govermuent,' to which • all ills, real and imaginary, are attributed.. My. wonder is not that the Government is unpopular, but that it is as well liked as it is."

What is the remedy ? My Indian friend suggested two : a stern, unbending economy in the administration and a national economic policy to develop the resources of the country. • Compared with Western countries, the Indian administration may be economical ; it is not so in relation to the income of the Indian individual. It tends to grow more expensive, partly because the Reforms of 1919 added to cost at the top, and because of the incessant demands for better pay for the vast number of Indians in the subordinate ranks. That lends support to the movement initiated by the Governor of Bombay for the radical overhaul of administrative methods. A substantial movement towards a national economic policy is made through the increased cotton duties provided in the current Budget. It has brought new life to the depressed textile industry of Bombay and dramatically altered the whole outlook of that great city, But it is our misfortune never to give generously. The actual incidence of the new duties is absolutely sound ; they offer effective pro- tection where it was wanted and none in non-competing goods. The introduction of the principle of British preference is un- fortunate, because it is the badge of fiscal servitude. The grumblings of the Lancashire interests, which are not mate- rially affected, copiously cabled to India and exploited in the Extremist Press, convey the impression that every fiscal measure in India is subject to the good will of a section of the British electorate.

And so we can only survey the Indian scene as through a glass darkly. How this emotion for Swaraj can be reconciled with ordered government we cannot see ; perhaps Sir John Simon and his colleagues can point the way. But whilst we have to secure the safety of the wonderful fabric of law and order established, the task will be easier if we steadily pursue the two policies which my friend indicated—economy and development, for they will rally important forces to our side. Bombay, March 8th.