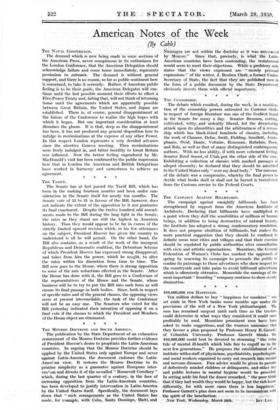 The Senate has at last passed the Tariff Bill, which has been in the making fourteen months and been under con- sideration in the. Senate itself for nearly ten months. The Senate vote of 53 to 31 in favour of the Bill, however, does not indicate the extent of the opposition to it nor guarantee its final enactment. Despite the twelve hundred odd amend- ments made to the Bill during the long fight in the Senate, the rates as they stand are still the highest in American history. Thus they would appear to be far in excess of the strictly limited upward revision which, in his few utterances on the subject, President Hoover has given the country to understand is all .he will permit. On the other hand, the Bill also contains, as a result of the work of the insurgent Republican and Democratic coalition, the Debenture Scheme of which President Hoover has expressed strong disapproval, and takes from him the power, which- he smeght, to alter the rates within - his discretion from time to time. The Bill now goes to the House, where there is strong opposition to some of the rate reductions effected in the Senate. After the House has done with it, the Bill goes to a Conference of the representatives of the House and the Senate, whose business will be to try to put the Bill into such form as will ensure its final passage in both bodies. Since, both in respect of specific rates and of the general clauses, the opposing views seem at present irreconcilable, the task of the Conference will not be an easy. one. The Senators who voted for the Bill yesterday indicated their intention of opposing it on a final vote if the clauses to which the President and Members of the House object are eliminated.