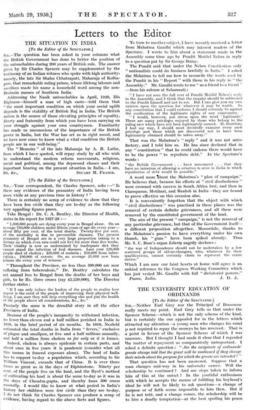 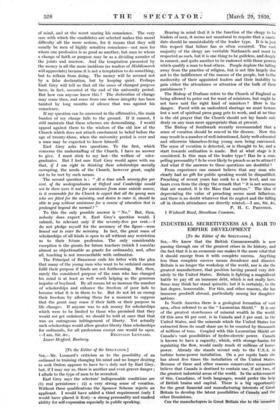 THE UNIVERSITY EDUCATION OF ORDINANDS

[To the Editor of the SPECTATOR.] Sia,—Neither Earl Grey nor the Principal of Brasenose really meets my point. Earl Grey tells us that under the Sponsor Scheine—which is not the only scheme of the kind, but is certainly the one appealed for in the letters which attracted my attention—a young man who changes his mind is not required to repay the moneys he has received. That is a point in faVour of the Sponsor Scheme of which I was unaware. But I thought I had made it clear that I regarded the matter of repayment as comparatively unimportant. I asked a definite question : " Are the recipients of ordinands' grants always told that the grant will be continued if they change their minds about the purpose for which the grants are intended ? "

That question has not been answered. Suppose that a man changes mid-way in his university career. Will the scholarship be continued ? And are steps taken to inform him of this at the outset ? In the youthful enthusiasm with which he accepts the means of fulfilling his boyhood's ideal he will not be likely to ask questions—a change of purpose or of faith seems impossible to him then. But if he is not told, and a change comes, the scholarship will be to him a deadly temptation—at the best spoiling his peace

of mind, and at the worst searing his conscience. The, very care with which the candidates are selected makes this moral difficulty all the more serious, for it means that they will usually be men of, highly sensitive conscience—not men for. whom one profession is as good as another, but men to whom a change of faith. or purpose may be as a dividing asunder of the joints and marrow. And the temptation. presented by the money is all the more insidious (as readers of Middlemarch will appreciate) because it is not a temptation to do something, but to refrain from doing. The money will he secured not by a false declaration, but by keeping quiet. Perhaps. Earl Grey will tell us that all the cases of changed purpose. have, in fact, occurred at the end of the university period. But how can anyone know this i The declaration of change may come then, and come from one whose integrity has been tainted by long months of silence that was against his conscience.

If my question can be answered in the affirmative, the main burden of my charge falls to the ground. If it cannot,' I still maintain that these schemes are demoralizing. I would appeal against them to the wisdom of the old law of the Church which does not attach emolument to belief before the age of twenty-three, when the university period is over and a man may be expected to know himself.

Earl Grey asks two questions. To the first, which concerns the understaffing of the Church, I have no answer to give. I must stick to my last—the welfare of nder- graduates. But I feel sure Earl Grey would agree with me that, if I am right in thinking these scholarships morally corrupting, the needs of the Church, however great, ought not to be met by such means. The second question is : " At a time whet seventy-five per cent. of the undergraduates at Oxford and Cambridge would not be there were it not for assistance from some outside source, is it reasonable for the Church to expect that all the young men who are fitted for the ministry, and des-ire to enter it, should be able to pay without assistance for a course of education that is prolonged beyond the normal ?"

To this the only possible answer is " No." But, then, nobody does expect it. Earl Grey's question would, I Submit, be relevant only if the Seventy-five per cent.—I do not pledge myself fOr the accuracy of the figure—were bound not to enter the ministry. In fact, the great mass of scholarships of all kinds is open to all without any restriction as to their future profession. The only considerable exception is the grants for future teachers (which I consider ahriost as objectionable as grants for ordinands), and, after' all, teaching is not irreconcilable with ordination.

The Principal of Biasenose ends hiS letter with the plea that many of the young men who want to be ordained cannot fulfiltheir purpose if funds are not forthcoming. But, then, surely the considered purpose of the man who has changed his mind is at least as well worth helping as the generous imPidie of boyhood. By all means let us increase the number of scholarships and enhance the freedom of poor lads to become what it is in them to be. But do not let us cramp their freedom by allowing them' for a moment to suppose that the grant may cease if their faith or their purpose in life changes. If anyone was to ask money for scholarships which were to be limited to those who promised that they would not get ordained, we should be told at once that that was an outrageous infringement of liberty. Yet actually such scholarships would allow greater liberty than scholarships for ordinands, for all professions except one would be open.