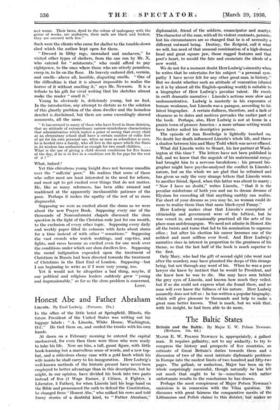 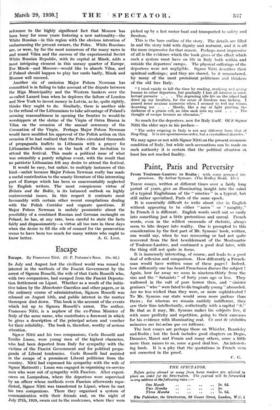 Britain and the Baltic.' By Major E. W. Poison. Newman. (Methuen. 10s. 6d.) MAJOR E. W. Porsoisr NEWMAN is, appropriately, 6, gallant rash. _ It reqUireS gallantry, not to say aiidacity, to try to compress the history and prospect§ 'of five dm/Aries, an estimate of Great Britain's (Mies towards them and a `discussion of two of the most intricate diplomatic problems -iii Europe into the modest limits Of two hundred and fifty-two pages. The gallant, or audabicing; Major has been on the -Whole surprisingly successful, though 'naturally he ' hal left out much that ought to insometimes with rather unfortunate results to the conclusions he haS drawn.

Perhaps' the most conspicuout of Major Poison Newrnan's omissions is in connexion with the Vilna questiori... He discusses with great fairness the comparative merits Of the 'Lithuanian and Polish claiing to this dilstrict, but rnakb§ no .• reference to the highly significant fact that Moscow has been busy for some years fostering a new nationality—the White Russian—in this region with the obvious intention of embarrassing the present owners, the Poles. White Russians are, or were, by far the most numerous of the many races in and round Vikaa and the success of the experimental Soviet White Russian Republic, with its capital at MinAlc, adds a most intriguing element in this uneasy quarter of Europe. For Minsk—and Moscow—would like to absorb Vilna, and if Poland should happen to play her cards badly, Minsk and Moscow will succeed.

Another sin of omission Major Poison Newman has committed is in failing to take account of the dispute between the Riga Municipality and the Western bankers over the so-called Lazard loan when he deplores the failure of London and New York to invest money in Latvia, as he quite rightly, thinks• they ought to do. Similarly, there is another side to the refusal of the Lithuanians to take advantage of Poland's seeming reasonableness in opening the frontier to would-be worshippers at the shrine of the Virgin of Ostra Brama in Vilna on the occasion of the annual ceremony of the Coronation of the Virgin. Perhaps Major Poison Newman would have modified his approval of the Polish action on this occasion if he had realized that the Poles circulated thousands of propaganda leaflets in Lithuania with a prayer for Lithuanian-Polish union on the back of the invitation to attend the festival. This made a political issue of what was ostensibly a purely religious event, with the result that no patriotic Lithuanian felt any desire to attend the festival.

It would be easy, but unfair, to multiply instances of this kind—unfair because Major Poison Newman really has made a useful contribution to the scanty literature of this interesting part of Europe which has been so unaccountably neglected by English writers. The most conspicuous virtue of Britain and the Baltic, is its balanced outlook on highly controversial issues. In this respect it contrasts most favourably with certain other recent compilations dealing with the Polish Corridor and cognate questions. If Major Poison Newman is unduly pessimistic about the possibility of a combined Russian and German onslaught on Poland, he has, at any rate, been careful to state the facts fairly and dispassionately—a virtue all too rare in these days when the desire to fill the ?Ole of counsel for the prosecution seems to have been too much for many writers who ought to