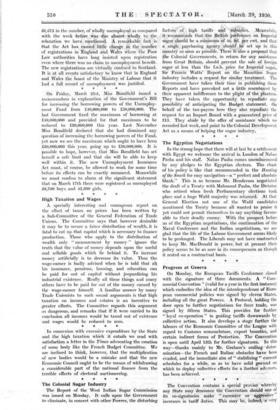 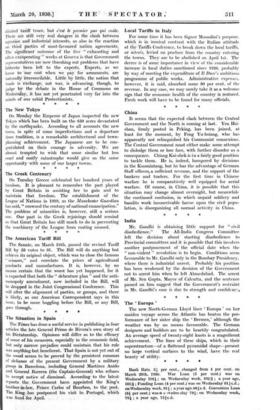 'whereby any State may denounce the Convention sheilld one of its eo-signatories make " excessive or a,ggresSive increases in tariff duties. This may be, indeed; 'a. verl dihited tariff truce, but c'esi le premier. pas qui coae. There aiie 'still very deal dangers" in the" clash betWeen agrarian and 'industrial interests, as also in the reaction on third parties of most-favoured nation agreeinents. The significant outcome of the five " exhausting' and often exasperating " weeks at Geneva is that Government representatives are now threshing out problems that have hitherto been left to the experts. Experts, as we know to our cost when we paTy for armaments, are naturally irreconcilable. Little by little, the notion that trade is "'eXcharige, not war, is advancing, though, to judge by the debate in the House of Commons on WedrieSday, it has not yet penetrated very far* into the minds of our rabid Protectionists.