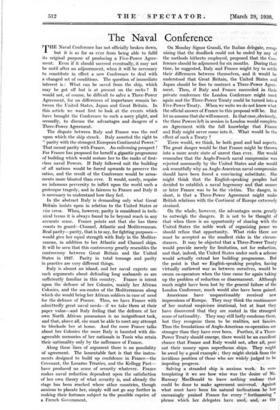 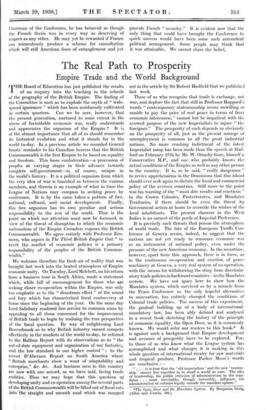 THE Naval Conference has not officially broken down, but it is as far as ever from being able to fulfil its original purpose of producing a Five-Power Agree- ment. Even if it should succeed eventually, it may not be until after an adjournment, when it, will be necessary to constitute in effect a new Conference to deal with a changed set of conditions. The question of immediate interest is : What can be saved from the ship, which may be got off but is at present on the rocks ? It would not, of course, be difficult to salve a Three-Power Agreement, for no differences of importance remain be- tween the United States, Japan and Great Britain. In this article we want first to look at the events which have brought the Conference to such a sorry plight, and secondly, . to discuss the advantages and dangers of a Three-Power Agreement.

The dispute between Italy and France was the .reef upon which the ship struck. Italy asserted the right to " parity with the strongest European Continental Power." That meant parity with France. An enlivening prospect ! For France has proposed for herself a gigantic programme of building which would restore her to the ranks of first- class naval Powers. If Italy followed suit the building of all nations would be foreed upwards to preserve the ratios, and the result of the Conference would be arma- ments more bloated than ever. It would, surely, require an infamous perversity to inflict upon the world such a grotesque tragedy, and in fairness to France and Italy it is necessary to understand how they feel.

- In the abstract Italy is demanding only what Great Britain insists upon in relation to the United States or vice versa. When, however, parity is considered in tech- nical terms it is always found to be beyond reach in any accurate sense. France points out that she has three coasts to guard—Channel, Atlantic and Mediterranean. Real parity—parity, that is to say, for fighting purposes—, would give her equal strength with Italy in the Mediter- ranean, in addition to her Atlantic and Channel ships. It will be seen that this controversy greatly resembles the controversy between Great Britain and the United States in 1927. Parity in total tonnage and parity in practice are very different things.

Italy is almost an island, and her naval experts use such arguments about defending long seaboards as are sufficiently familiar in this country. France is intent upon the defence of her Colonies, mainly her African Colonies, and the sea-routes of the Mediterranean along which she would bring her African soldiers in case of need for the defence of France. Thus, we have France with admittedly great naval needs—if we take them at their paper value—and Italy feeling that the defence.. of her own North African possessions is no insignificant task, and that, above all, she must be able to meet any attempt to blockade her at home. And the more France talks about her Colonies the more Italy is haunted with dis- agreeable memories of her nationals in Tunis who retain_ their nationality only by the sufferance of France.

Along these lines of argument there is- no possibility of agreement. The lamentable fact is that the instru- ments designed to build up confidence in France—the Covenant, the Locaino Treaties, and the Kellogg Pact— have produced no sense of security whatever. France makes naval reduction dependent upon the' satisfaction of her own theory of what security is, and already the stage has been reached where other countries,., though anxious to placate her, simply will not go any further in. making their fortunes subject to the possible caprice of a French Government. On Monday Signor Grandi, the Italian delegate, recog- nizing that the deadlock could not be ended by any of the methods hitherto employed, proposed that the Con- ference should be adjourned for six months. During that time, he suggested, Italy and France might try to settle their differences between themselves, and it would be understood that Great Britain, the United States and Japan should be free to contract a Three-Power Agree- ment. Then, if Italy and France succeeded in- their private conference the London Conference might meet again and the Three-Power Treaty could be turned into a Five-Power Treaty. _When we write we do not know what the official answer of France to this proposal willbe. - But let us assume that she will consent. In that case, obviously, the three Powers left in session in London would complete an Agreement with the full knowledge that France and Italy might never come into it. What would be the effect of such a Treaty ?

There would, we think, be both good and bad aspects. The great danger would be that France might be thrown into a more acute state of unrest than ever. She would remember that the Anglo-French naval compromise was rejected summarily by the United States and she would ask resentfully why an Anglo-American naval compromise should have been found a convincing substitute. She might think that the English-speaking peoples had decided to establish a naval hegemony and that sooner or later France was to be the victim. The danger, in short, is that a Three-Power Agreement might make British relations with the Continent of Europe extremely strained.

On the whole, however, the advantages seem greatly to outweigh the dangers. It is not to be thought of that when there is an opportunity of sharing with the United States the noble work of organizing peace we should refuse that opportunity. What risks there are must be accepted as the smallest risks in the circum- stances. It may be objected that a Three-Power Treaty would provide merely for limitation, not for reduction, and that, indeed, the United States under such a scheme would actually extend her building programme: But the point is that we English-speaking peoples, having virtually outlawed war as between ourselves, would be sworn co-operators when the time came for again taking up the problem of reduction or disarmament. Although much might have been lost by the general failure of the London Conference, much would also have been gained.

Americans have unquestionably received new impressions of Europe. They may think the continuance of her- mutual suspicions irrational, but at least they have discovered that they are rooted in the strongest sense of nationality. They may still hotly condemn them, but they recognize them to be realities, not fancies. Thus the foundations of Anglo-American co-operation are stronger than they have ever been. Further, if a Three- Power Treaty should emerge, there would be an excellent chance that France and Italy would not, after- all, pour out their, money upon superfluous ships. They might be awed by a good example ; .they might shrink from the invidious position of those who are widely judged to be impeding progress.

Salving a stranded ship is anxious work. In con- templating it we see how wise was the desire of Mr.

Ramsay MacDonald to leave nothing undone that could be done to make agreement universal. Against what must have been his natural inclinations he has unceasingly praised France -for every " forthcoming phrase which her delegates have used, - and, as the Chairman of the Conference, he has behaved as though the French thesis was in every way as deserving of respect as any other. He may yet be rewarded if France can miraculously produce a scheme for consultation which will still American fears of entanglement and yet provide French " security." It is evident now that the only thing that could have brought the Conference to quick success would have been some such antecedent political arrangement. Some people may think that it was attainable. We cannot share the belief,