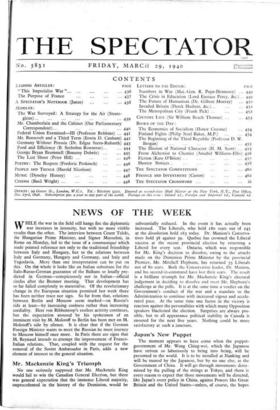 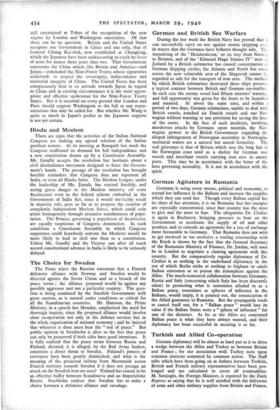 The moment appears to have come when the puppet- government of Mr. Wang Ching-wei, which the Japanese have striven so laboriously to bring into being, will be presented to the world. It is to be installed at Nanking and will be treated by the Japanese, but by no one else, as the Government of China. It will go through movements deter- mined by the pulling of the strings at Tokyo, and there is every reason to expect that those movements will be directed, like Japan's overt policy in China, against Powers like Great Britain and the United States—unless, of course, the hopes still entertained at Tokyo of the recognition of the new regime by London and Washington materialise. Of that there can be no question. Britain and the United States recognise one Government in China and one only, that of General Chiang Kai-shek, now established at Chungking, which the Japanese have been endeavouring to crush by force of arms for nearer three years than two. That Government represents the China which, like Britain and America—and Japan,—concluded the Nine-Power Treaty, whose signatories undertook to respect the sovereignty, independence and territorial integrity of China. The United States has been conspicuously firm in its attitude towards Japan in regard to China and in existing circumstances it is the most appro- priate and effective spokesman for the Nine-Power Treaty States. But it is essential on every ground that London and Paris should support Washington to the full in any repre- sentations that may be called for. But whether Mr. Wang is quite as much in Japan's pocket as the Japanese suppose is not yet certain.