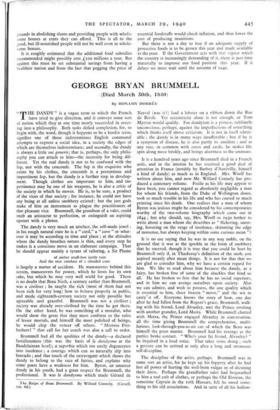 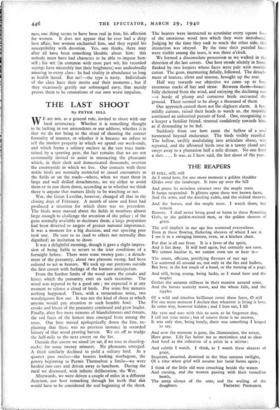 "III HE DANDY" is a vague term to which the French have tried to give direction, and it conveys some sort of notion which they at one time nearly succeeded in erect- ing into a philosophy. Both tasks defied completion, for, to begin with, the word, though it happens to be a border term, signifies one of those indeterminate English communal attempts to express a social idea, in a society the edges of which are themselves indeterminate; and secondly, the dandy is always a little sui generis; that is, perhaps, the only philo- sophy you can attach to him—the necessity for being dif- ferent. Yet the real dandy is not to be confused with the fop, nor with the coxcomb. The fop is the exquisite who exists by his clothes, the coxcomb is a pretentious and impertinent fop, but the dandy is a further step in develop- ment. Though clothes are important to him, and im- pertinence may be one of his weapons, he is also a critic of the society in which he moves. He is, to be sure, a product of the vices of that society ; for instance, he could not have any being at all unless snobbery existed : but the just gods make of him an instrument to plague the practitioners of that pleasant vice. Brummell, the grandson of a valet, could snub an aristocrat to perfection, or extinguish an aspiring upstart with a phrase.

The dandy is very much an artefact, the self-made jewel ; in his rough natural state he is a " card," a " cove " or what- ever it may be according to time and place ; at the altitudes where the dandy breathes nature is thin, and every step he makes is a conscious move in an elaborate campaign. That he should appear mainly a tyrant of tailoring, a Sir Plume

is largely a matter of accident. He manoeuvres behind this screen, manoeuvres for power, which he loves for its own sake, but which he may very well wield for good. There is no doubt that Beau Nash, a century earlier than Brummell, was a civiliser ; he taught the rich (most of them had not been rich for very long) how to behave properly in public, and made eighteenth-century society not only possible but agreeable and graceful. Brummell was not a civiliser ; society was already over-civilised by the time he got there. On the other hand, he was something of a moralist, who would show the great that they must conform to the rules of lesser mortals, and himself the most polished of beings, he would chip the veneer off others. " Mistress Fitz- herbert! " that call for her coach was also a call to order.

Brummell had all the qualities of the dandy—a declared fastidiousness (this was the basis of le dandysme at the Baudelairean level); a superbia which too easily degenerates into insolence ; a courage which can so naturally slip into bravado ; and that touch of the extravagant which shows the dandy to belong to the race of fairies, and explains why some poets have a weakness for him. Byron, an amateur dandy in his youth, had a great respect for Brummell, the professional. It was le dandysme which made Gerard de

Nerval (was it?) lead a lobster on a ribbon down the Rue de Rivoli. Yet eccentricity alone is not enough, or Tom Mytton would qualify. For dandyism is a protest, sublimely unconscious, perhaps, against the imperfections of something which thinks itself above criticism. It is not in itself admir- able ; the dandy is in many ways insufferable ; but if he is a symptom of disease, he is also partly its antidote ; and at any rate, in common with coves and cards, he makes life spin along more briskly, and brings altertness to the unaware.

It is a hundred years ago since Brummell died in a French asile, and in the interim he has received a good deal of attention in France (notably by Barbey d'Aurevilly, himself a kind of dandy) as much as in England. Mrs. Woolf has written about him, and now Mr. Willard Connely has pro- duced a centenary volume. Futile as his life may appear to have been, you cannot regard as absolutely negligible a man for whom his friends, from the Duke of Wellington down, took so much trouble in his life and who has caused so much printing since his death. One realises that a man of whom Byron was jealous might be considered by his contemporaries worthy of the two-volume biography which came out in 1844 ; but why should, say, Mrs. Woolf in 193o bother to write about a man whom she describes as " flickering, sneer- ing, hovering on the verge of insolence, skimming the edge of nonsense, but always keeping within some curious mean "?

It is no use saying that he was in any way noble, on the ground that it was at the ignoble in the form of snobbery that be sneered, though it is true that you could be hurt by Brummell only if, in Thackeray's definition of the snob, you aspired meanly after mean things. It is not for that that we are glad to consider him, why we have a certain regard for him. We like to read about him because the dandy, as a fairy, has broken free of some of the shackles that bind us all. He has broken so free that he has no social superiors, and in him we can avenge ourselves upon society. Also we can admire, and wish to possess, the one quality which is essential to him, sheer brazen " nerve," and the wit to carry' it off. Everyone knows the story of how, one day after he had fallen from the Regent's grace, Brummell, walk- ing with his friend, Lord Alvanley, met the Prince strolling with another grandee, Lord Moira. While Brummell chatted with Moira, the Prince engaged Alvanley in conversation, all the time giving Brummell the comprehensive, multi- farious, look-through-you-as-air cut of which the Beau was himself the great master. Brummell had his revenge as the parties broke contact. " Who's your fat friend, Alvanley? " he inquired in a loud voice. That takes some doing ; such a gesture can be arrived at only after a long and strenuous self-discipline.

The discipline of the artist, perhaps. Brummell was in some sort an artist, for he kept up his foppery after he had lost all power of hurting the well-born vulgar or of dictating their dress. Perhaps the grandfather valet had bequeathed to him a real cult of clothes, or perhaps the Old Etonian, the sometime Captain in the loth Hussars, felt he owed some- thing to his old associations. And in spite of all his hollow- ness, one thing seems to have been real in him, his affection for women. It does not appear that he ever had a deep- love affair, but women enchanted him, and they repaid his susceptibility with devotion. Yes, one thinks, there may after all have been something likeable about him: this nobody must have had character to be able to impose him- self ; his wit (in congnon with most past wit, his recorded sayings have miserably lost their brightness) was undoubtedly amusing to every class : • he had vitality in abundance so long as health lasted. But no!—the type is nasty. Individuals of the class have their merits and their moments ; but if they vicariously gratify our submerged envy, that merely proves them to be emanations of our own worst impulses.