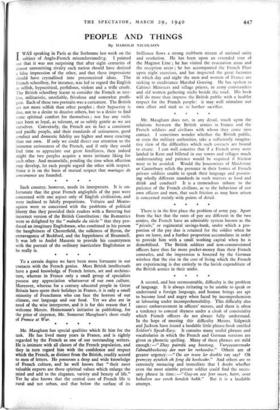 There is in the first place the problem of army

pay. Apart from the fact that the rates of pay are different in the two armies, the French have an admirable system known as the " pecule," or regimental savings-bank, under which a pro- portion of the pay due is retained for the soldier when he goes on leave, and a further proportion accumulates in order to provide him with a small working capital when he is demobilised. The British soldiers and non-commissioned officers have thus far more pocket-money than their French comrades, and the impression is fostered by the German wireless that the rise in the cost of living which the French are experiencing is due entirely to the lavish expenditure of the British armies in their midst.