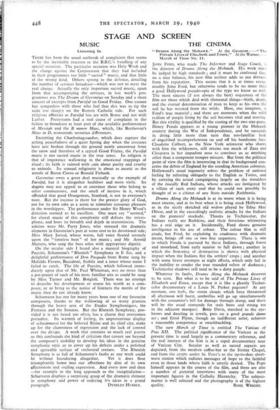 " Drums Along the Mohawk." At the Gaumont.—" The Private Lives of Elizabeth and Essex." At the Warner.--- March of Time No. 11.

JOHN FORD, who made The Informer and Stage Coach, is the director of Drums Along the Mohawk. His work must be judged by high standards ; and it must be confessed that. on a nice balance, his new film neither adds to nor detracts from his reputation. This means that it is at times recog- nisably John Ford, but otherwise tends to be no more than a good Hollywood pseudo-epic of the type we know so well. The most sincere (if not always the best) sequences of the film are those which deal with elemental things—birth, death, and the eternal determination of man to keep as his own the soil he has wrested from the wilds. Here, one imagines, is Ford's true material ; and there are moments when the solid realism of people living by the soil becomes vital and moving. But this vitality is qualified by the casting of the two star-parts. Henry Fonda appears as a young pioneer in the Mohawk country during -the War of Independence, and he succeeds in doing little more than turn that too-familiar look of anguished incomprehension on and off his handsome face. Claudette Colbert, as the New York aristocrat who shares with him the wilderness, still retains too much of Zaza and Cleopatra in her impudent nose to convince us as anything other than a competent trouper miscast. But from the political point of view the film is interesting in that its background con- cerns the defeat of England by the seceding American colonists. Hollywood's usual ingenuity solves the problem of national feeling by referring obliquely to the English as Tories, and by carrying the actual campaigning largely on the shoulders of the rascally Red Indians, whose attacks are instigated by a villain of such sooty soul that he could not possibly be thought of as a citizen of any State outside Rathbonia.

Drums Along the Mohawk is at its worst when it is being most sincere, and at its best when it is being stock Hollywood, as in the nicely sketched old widow played by Edna May Oliver, and in the exceedingly realistic attacks by the Indians on the pioneers' stockade. Thanks to Technicolor, the Indians really are Redskins, and their ferocious whinnying has a real edge on it. Incidentally, Ford shows genuine intelligence in his use of colour. The colour film is still crude, but Ford, by exploiting its crudeness with dramatic intent, brings off one or two fine sequences. There is one in which Fonda is pursued by three Indians, through forest and moorland; from early sunrise to full dawn ; another in which the flowering of destruction is shown with physical impact when the Indians fire the settlers' crops ; and another with some brave attempts at night effects, which only fail in the inability to render the true rounded velvet of darkness ; Technicolor shadowi still tend to be a dirty purple.

Whatever its faults, Drums Along the Mohawk deserves to be seen. But what is to be said of The Private Lives of Elizabeth and Essex, except that it is like a ghastly Techni- color documentary of a Louis N. Parker pageant? At any moment, one feels, the storm clouds which have threatened all afternoon will burst, umbrellas will go up simultaneously with the costumier's bill for damage through damp, and there will be the usual stampede for stale buns and strong tea in the adjacent marquee. Bette Davis, starched to the eye- brows and dazzling in jewels, puts on a good grande dame act ; and Errol Flynn, though an indifferent actor, achieves a reasonable competence at swashbuckling.

The new March of Time is entitled The Vatican of Pius XII. The political significance of the Vatican at the present time is used largely as a commentary reference, and the real interest of the film is in a rapid documentary tour of Vatican City. Secular as well as sacred aspects are depicted, from the modern coffee-bar to the Sistine Chapel, and from the crypts under St. Peter's to the up-to-date short- wave station which radiates messages of hope to the faithful even in those lands where faith is utterly denied. The Pope himself appears in the course of the film, and there are also a number of pictorial interviews with many of the most important figures in the Catholic Hierarchy. The subject- matter is well selected and the photography is of the highest