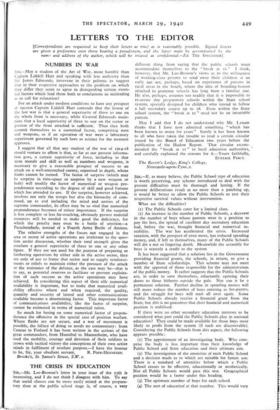 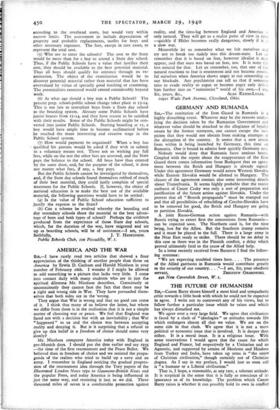 Snt,—If, as many believe, the Public School type of education

is worth preserving, any scheme introduced to deal with the present difficulties must be thorough and lasting. If the present deliberations result m no more than a patching up, it would be better to allow the Public Schools to test their respective survival values without intervention.

What are the difficulties?

(r) The Public Schools cater for a limited class.

(2) An increase in the number of Public Schools, a decrease in the number of boys whose parents were in a position to pay the fees, the spread of excellent day secondary education had, before the war, brought financial and numerical in- stability. The war has accelerated the crisis. Increased taxation, with the prospect of even more, has reduced spending money, and, if left to themselves, many of the Public Schools will die a not so lingering death. Meanwhile the scramble for boys is scarcely a credit to the system.

It has been suggested that a solution lies in the Government providing financial grants, the schools, in return, to give a

number of State scholarships. This scheme may not meet with the approval of those responsible for the administration of the public money. It rather suggests that the Public Schools are, in order to save themselves, reluctantly opening their doors to those hitherto outside the pale. Nor can it be a permanent solution. Further decline in spending money will still more reduce the number of boys entering as fee-payers, and the struggle for boys will start all over again. Some Public Schools already receive a financial grant from the State, but this is no guarantee that their financial and numerical position is stabilised.

If there were no other secondary education interests to be considered what part could the Public Schools play in national education? They could be made available for those boys most likely to profit from the system (if such are discoverable).

Considering the Public Schools from this aspect, the following appears possible: • (r) The appointment of an investigating body. Who com- prise the body is less important than their knowledge of Public School and State education and their ultimate aim.

(2) The investigation of the amenities of each Public School and a decision made as to which are suitable for future use. There is a standard of amenities below which a Public School ceases to be effective, educationally or aesthetically. Not all Public Schools would pass this test. Geographical position would be a factor under this heading.

(3) The optimum number of boys for each school.

(4) The cost of education at that number. This would vary according to the overhead costs, but would vary within narrow limits. The assessment to include depreciation of property and probable replacements, outfits for boys and other necessary expenses. The fees, except in rare cases, to represent the total cost.

(5) Who are to enter the schools? The cost to the State would be more than for a boy to attend a State day school. Thus, if the Public Schools have a value that justifies their cost, they should be available to the best potential material. Thus all boys should qualify for entrance through an ex- amination. The object of the examination would be to discover potential material rather than material that has been overvalued by virtue of specially good teaching or cramming. The potentialities examined would extend considerably beyond work.

(6) At what age should a boy join a Public School? The present prep. school-public school change takes place at 13-14. This is too late to transplant boys from a State day school to the boarding system. Already some Public Schools have junior houses from 11-14, and they have reason to be satisfied with their results. Some of the Public Schools might be con- verted into junior Public Schools. Starting boarding at 11, a boy would have ample time to become acclimatised before he reached the more interesting and creative stage in the Public School system.

(7) How would payment be organised? When a boy has qualified his parents would be asked if they wish to submit to a voluntary means test. Those not so wishing pay full fees, while on the test the other fees are assessed, and the State pays the balance to the school. All boys have thus entered by the same door, and, for the purpose of the school, it does not matter what fees, if any, a boy pays.

(b) Can a scheme be evolved whereby the boarding and day secondary schools share the material to the best advan- tage of boys and both types of school? Perhaps the evidence produced from the experience of those State day schools, which, for the duration of the war, have migrated and set up as boarding schools, will be of assistance.—I am, yours