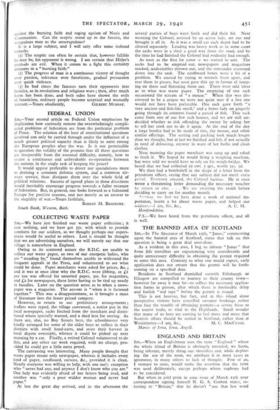 SIR, We have just finished our waste paper collection ; it cost nothing, and we have got 35s. with which to provide comforts for our soldiers, so we thought perhaps our experi- ences would be useful to others. Lest it should be thought that we are advertising ourselves, we will merely say that our village is somewhere in England.

Owing to its scattered nature the R.D.C. are unable to collect our waste paper, so two of our energetic ladies, who are " standing by," found themselves unable to withstand the frequent appeals in the Press, and volunteered to see what could be done. Paper merchants were asked for prices, &c. ; and, it was at once clear why the R.D.C. were jibbing, as ,Cr per ton was offered for unsorted paper, 3os. for magazines, and £2 for newspapers, these latter having to be tied up neatly in bundles. Later on the question arose as to when a news- paper was a magazine. The answer is " when it is fastened together." This was a disappointment, as it brought a mass of literature into the lesser priced category.

However, to return to our preliminary arrangements ; leaflets were typed, the village canvassed, a notice put in the local newspaper, sacks fetched from the merchant and distri- buted where specially wanted, and a shed lent for storing. As there are, alas, no Boy Scouts here, the schoolmaster very kindly arranged for some of the older boys to collect in their districts with small hand-carts, and store their harvest in local depots overnight, whence it could be picked up next morning by a car. Finally, a retired Colonel volunteered to do this, and any other car work required, with no charge, pro- vided he could get a little extra petrol.

The canvassing was interesting. Many people thought that waste paper meant only newspaper, whereas it includes every kind of paper, cardboard, cartons, &c., provided it is clean. Nearly everyone was willing to help, with one surly exception who " never had any, and anyway I don't know who you are." One lady was evidently afraid of her letters being read, and another was " only a poor widder woman and never had paper."

At last the great day arrived, and in the afternoon the several parties of boys went forth and did their bit. Next morning the Colonel, assisted by an active lady, set our and brought it all in. As it was a small car each depot had to be cleared separately. Loading was heavy work as in some cases the sacks were in a shed a good way from the road, and by the time he had finished the Colonel had evidently had enough.

As soon as the first lot came it we started to sort. The sacks had to be emptied out, newspapers and magazines stacked, undesirables thrown out, and the remainder crammed down into the sack. The cardboard boxes were a bit of a problem. We started by trying to wrench them apart, and tear them in pieces, but soon gave this up in favour of jump- ing on them and flattening them out. There were odd ideas as to what was waste paper. The emptying of one sack occasioned the scream of " a mouse." When this was dis- covered to be a corpse we were not quite sure if a live one would not have been preferable. One sack gave forth " a very ancient and fish-like smell," and a brave lady on gingerly going through its contents found a parcel of fish. This sack came from one of our few rich houses, and we are still un- decided whether to risk offending the owner by asking her to tell her cook not to do it again. At the end of the day a large bonfire had to be made of this, the mouse, and other similar offerings. The sorting and packing took much longer than we thought, but at last we finished and felt, if not actually in need of delousing, anyway in want of hot baths and clean clothes.

Next morning the paper merchant was rung up and asked to fetch it. We hoped he would bring a weighing machine, but were told we would have to rely on his weigh-bridge. We heard that we had collected 19 cwt. 3 qrs., worth 35s. 3d.

We then had a bombshell in the shape of a letter from the petroleum officer, saying that our subject did not merit extra petrol. Everyone amazed, the Colonel furious. He at once wrote a threatening letter demanding the necessary voucher by return or else. . . . We are awaiting the result before deciding to carry on for another month.

A.:wway. we feel we have done a work of national im- portance, learnt a lot about waste paper, and helped our P.S.—We have heard from the petroleum officer, and all is well.