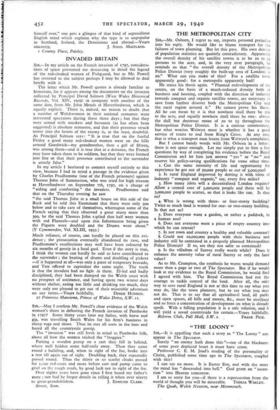 Snt,—Mr. Osborn, I regret to say, imports personal prejudice into his reply. He would like to blame transport for the failures of town planning. But let this pass. His own density of population statistics are quaintly contradictory. Apparently the overall density of his satellite towns is to be 20 to 25 persons to the acre, and, in the very next paragraph, he reminds us that " the overall density of the Metropolitan Police District (very roughly the built-up area of London) is 20." What can you make of this? For a satellite town apparently good: for a metropolis apparently bad!

He states his thesis again. " Planned redevelopment of the centre, on the basis of a much-reduced density both of business and housing, coupled with the direction of industry towards compact and organic satellite towns, are necessary to save from further disaster both the Metropolitan City and the rural region around it." He cannot prove his thesis. All he can mean by it is that nowhere shall there be 200 to the acre, and equally nowhere shall there be one: always the dull but decorous mean of 20 to 25 throughout the Metropolitan Police District. It is a curious commentary, but what worries Welwyn most is whether it has a good service of trains to and from King's Cross. At any rate, that is what a transport man learns from Welwyn's complaints.

But I cannot bandy words with Mr. Osborn in a letter: there is not space enough. Let me simply put to him a few questions by way of completing his evidence before the Royal Commission and let him just answer " yes " or " no " and reserve his policy-saving qualifications for some other time.

2. Is rural England improved by dotting it with islets of industry " compact and organic," say, every five miles?

5. Does everyone want a garden, or rather a paddock, in a human zoo?

6. Does not everyone want a piece of empty country into which he can retreat?

7. Is not town and country a healthy and valuable contrast?

8. Could not to,000,000 people with their business and industry still be contained in a properly planned Metropolitan Police District? If so, are they not safer so contained?

9. Is the villadom of Surrey really worth while? Does it enhance the amenity value of rural Surrey or only the land value?

As to Mr. Crampton, the synthesis he wants would demand more than a page or two of The Spectator. But if he would look at my evidence to the Royal Commission, he would find I agreed with him. The Royal Commission had not the courage to tackle control of the land. After all, the only way to save rural England is not at this time to say what you may do, like the town planners, but to say what you may not do. That is to say that all agricultural land, all parks and open spaces, all hills and moors, &c., must be sterilised and so force a concentration of development on what is already spoilt. With a falling population it is a safe solution, and it will yield a saved countryside for certain.—Yours faithfully, Reform Club, Pall Mall, S.W.1. FRANK PICK.