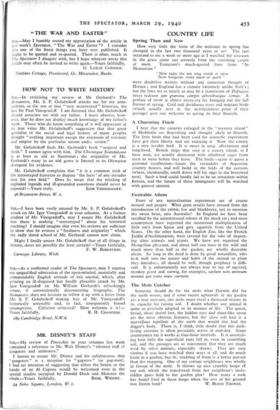 HOW NOT TO WRITE HISTORY SIR,—In criticising my -review of

Mr. Gerhardi's The Romanovs, Mr. S. P. Golubrikoff attacks me for my ante- cedents, as the son of that " very stereotyped " historian, the late Sir Paul Vinogradoff. I am flattered that Mr. Golubrikoff should associate me with my father. I must observe, how- ever, that he does not display much knowledge of my father's work. Those who do know something of it will appreciate at its true value Mr. Golubrikoff's suggestion that that great specialist in the social and legal history of many peoples thought " nothing important except the extension of territory and empire by the particular nation uncle' review."

Mr. Golubrikoff finds Mr. Gerhardi's book " original and fresh." I cannot agree with him. The Chronique Scandaleuse is at least as old as Suetonius ; the originality of Mr. Gerhardi's essay in an old genre is limited to its Olympian disregard for evidence.

Mr. Golubrikoff complains that " it is a common trick of the stereotyped historian to dispute ' the facts' of any intruder into his own field." Does he mean that the retailing of exploded legends and ill-grounded assertions should never be