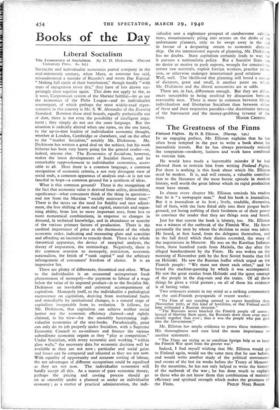 The Greatness of the Finns

Finland Fights. By H. B. Elliston. (Harrap. 155.) IN an engaging preface, Mr. Elliston explains that he has often been tempted in the past to write a book about his journalistic travels. But he has always previously resisted

the temptation—modesty, laziness and work have combined to restrain him.

He would have made a lamentable mistake if he had allowed them to restrain him from writing Finland Fights. For there is nothing in this book about which Mr. Elliston

need be modest. It is, and will remain, a valuable contribu-

tion to the literature of the most heroic episode in modern history, well worth the great labour which its rapid production

In almost every chapter Mr. Elliston reminds his .readers

that he is " a newspaper man." And his book is journalism. But it is journalism at its best ; lively, readable, discursive,

full of facts, with the facts fitted ably into their proper back- ground, yet losing nothing of their freshness or of their power to convince the reader that they are things seen and heard.

Just for that reason the book is history, too. Mr. Elliston was a witness of the outbreak of the Finnish War. He knew personally the men by whom the decision to resist was taken. He heard, at first hand, from the delegates themselves, and in the full detail which their diaries recorded, the story of

the negotiations in Moscow. He was on the Karelian Isthmus front, three hundred yards from Mainila, the day after the alleged bombardment by the Finns. He was woken on the morning of November 3oth by the first Soviet bombs that fell on Helsinki. He saw the Russian leaflet which urged on the Finnish people: " We must not shoot each other," and he heard the machine-gunning by which it was accompanied. He saw the great exodus from Helsinki and the quiet courage of the people in the dug-outs and the trains. Of all these things he gives a vivid picture ; on all of them his evidence is of lasting value.

Two sentences remain in my mind as a striking commentary on the anti-Finnish propaganda of recent weeks : " No Finn of any standing seemed to expect hostilities then (November 3oth), or this kind of hostilities, or that Finland could long withstand a Russian invasion."

" The Russians never knocked the Finnish people off centre ; instead of blowing them apart, the Russians drew them even more closely together than ever ; thus it was'-the people who put guts into the Government."

Mr. Elliston has ample evidence to prove these statements. His thoroughness and care lend the more importance to another statement :

" The Finns are trying so to condition foreign help as to keep the Finnish War apart from the greater war."

Indeed, I find myself wishing that Mr. Elliston would go to Finland again, would see the same men that he saw before, and would write another study of the political movements and events of the last six weeks before the Treaty of Moscow. In the meantime, he has not only helped to write the history of the outbreak of the war ; he has done much to explain to those who do not know them that combination of material efficiency and spiritual strength which makes the greatness of