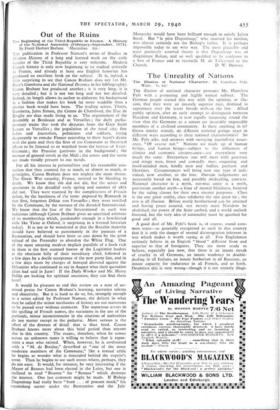 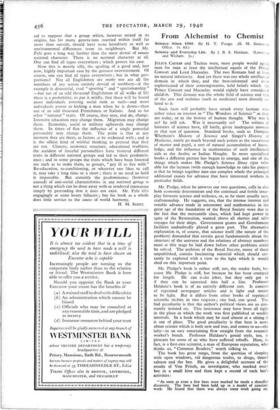 The Unreality of Nations

THE illusion of national character provides Mi. Hamilton Fyfe with a promising and highly topical subject. The German people started this war with the opinion, or illu- sion, that they were an innately superior race, destined to supremacy over the lesser breeds with.ut the law. Allied public opinion, after an early attempt to distinguish between Nazidom and Germany, is now rapidly hardening round the view that the Germans as a nation are incurably impossible members of a civilised community. Is there anything in it? Given similar stimuli, do different national groups react in different ways according to their national characteristics? So Mr. Fyfe asks, and answers with sweeping journalistic assur- ance, " Of course not." Nations are made up of human beings, and human beings—subject to the influences of climate and economic circumsLance—are everywhere very much the same. Everywhere one will meet with generous and stingy men, brave and cowardly men. enquiring and fossil-minded men, kindly men and bullies, puritans and libertines. Circumstances will bring now one type of indi- vidual, now another, to the fore. Outside judgements are necessarily based on few, and possibly misleading, contacts. National character is a myth, national unity is a myth, patriotism another myth—a kin° of mental blindness, fostered by the ruling classes for their own sinister purposes. Class is the one great reality, class solidarity the one great tie ; the rest is all illusion. Before world brotherhood can be attained and lasting peace assured, not merely must Nazidom be abolished, the power of the State curbed, and a world outlook fostered, but the very idea of nationality must be quashed for good and all.

A good deal of Mr. Fyfe's book is, of course, sound com- mon sense—so generally recognised as such in this country that it is only the danger of mental disintegration inherent in war which makes it worth saying at all. Few Englishmen seriously believe in an English " blood " different from and superior to that of foreigners. They are more ready to believe, especially just now, that there is an innate streak of cruelty in all Germans, an innate tendency to double- dealing in all Italians, an innate barbarism in all Russians, an innate capacity for endurance in all French, and so forth. Doubtless this is very wrong—though it is not entirely illogi- cal to suppose that a group which, however mixed in it origins, has for many genera:ions married within itself fa more than outside, should have some hereditary as well a environmental differences trom its neighbours. But Mr Fyfe goes a long way further than the mere denial of innat national character. There is no national character at all One can find all types everywhere ; which proves his case.

Now this is Merely silly, the spoiling of a good and, jus now, highly important case by the grossest overstatement. 0 course, one can find all types everywhere ; but in what pro portions? Not all Englishmen are snobs nor are all th members of any nation entirely devoid of snobbery—if th example is distasteful, read " sporting " and " sportsmanship' —but out of an odd thousand Englishmen of all walks of lif there is a probability, to put it mildly, that there will be found more individuals revering social rank as such—and mor individuals averse to kicking a man when he is down—than out of an odd thousand Frenchmen or Italians. And so fo other " national " traits. Of course, they may, and do, change Intensive education may change them. Migration may chang them. Economic, social - or military upheavals may chang them. In times of flux the influence of a single powerfu personality may change them. The point is that at any moment they are there, as factors Lo be reckoned with ; and i is the silliest kind of wishful thinking to pretend that they are not. Climate, economic structure, educational tradition the accident of forceful personalities have fostered differen traits in different national groups and led to their predomin ance ; and in some groups the traits which have been fostered are such as to make them, as groups, " gey ill to live with.'

Re-education, re-conditioning, or whatever one likes to cal it, may take a long time or a short ; there is no need to hold it impossible. But certainly the predominance (however caused) of anti-social characteristics in any national group not a thing which can be done away with or rendered innocuous simply by pretending that it does not exist. Mr. Fyfe tilts engagingly at some hoary fallacies ; but his book as a whole does little service to the cause of world harmony.