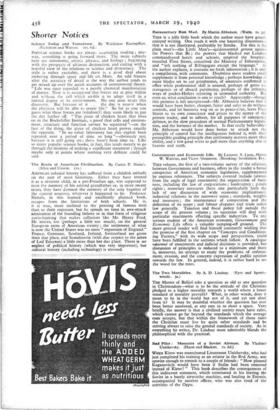 Page 26, 29 March 1940 — AMERICAN colonial history has suffered from a childish attitude on
Close

AMERICAN colonial history has suffered from a childish attitude on

the part of most historians. Either they have treated it as a reverent child, in a pre-Freudian age, was supposed to treat the memory of his sainted grandfather or, in more recent times, they have damned the memory of the only begetter of the current neurosis, whatever it happened to be. Professor Nettels, in this learned and excellently planned book, escapes from the limitations of both schools. He is, it is true, more inclined to the praising of famous men than to their exposure, but he spends no time in awe-struck admiration of the founding fathers or in that form of religious curio-hunting that makes collectors like Mr. Henry Ford. He insiits, too (perhaps a little too much), on the general European roots of American society ; the settlement of what is now the United States was no mere " expansion of England." France, Germany, Scotland, Ireland, Switzerland are given their due place, and Scandinavia (with due respect to the ashes of Leif Ericcson) a little more than her due place. There is no neglect of political history (which was very important), but cultural history (including technology) is stressed.