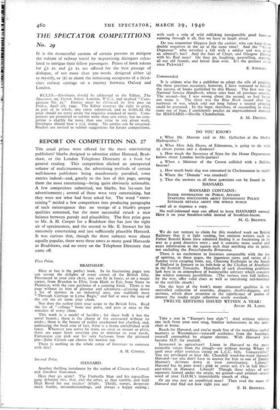 REPORT ON COMPETITION NO. 27 THE usual prizes were offered

for the most entertaining publishers' blurbs designed to advertise either Hansard, Brad- shaw, or the London Telephone Directory as a book for general reading. This competition elicited an unexpected volume of maliciousness, the advertising methods of certain well-known publishers being murderously parodied, some entries indeed—and, greatly to the loss of this page, among them the most entertaining—being quite obviously actionable. A few competitors submitted, not blurbs, but lay-outs for advertisements ; several of These were very entertaining, but they were not what had been asked for. The word " enter- taining " misled a few competitors into producing paragraphs of such extravagance that no vestige of a blurb's proper qualities remained, but the most successful struck a nice balance between parody and plausibility. The first prize goes to Mr. A. H. Cooper for a Bradshaw that has just the right air of speciousness, and the second to Mr. E. Stewart for his extremely entertaining and just sufficiently plausible Hansard. It was curious that, though the three subjects were about equally popular, there were three times as many good Hansards as Bradshaws, and no entry on the Telephone Directory that came off.

Here at last is the perfect book. In its fascinating pages you can savour the delights of every corner of the British Isles. Ensconced in your easy chair, you can fly in fancy, as' on a magic carpet, from Brandon to Flint, from Hook to Eye, from Stone to Plumtree, with the sure guidance of a cunning hand. There is no page without its hint of glamour and adventure—glancing down a list of stations in an industrial area, you suddenly meet " Through Carriage to Lyme Regis," and feel at once the tang of the salt sea air upon your cheek.

Nor does the author limit your scope to the British Isles. Read the list of " tailings " from our ports, and pass at once to the wonders of every clime.

This work is a model of lucidity ; for sheer bulk it has the novel beaten ; there is the charm of the crossword without its tricks ; there is the beauty of reality unadorned but clarified, and, embracing the hard core of fact, there is a frame embellished with fancy. Wherever you arrive by train, on coast or mount or plain, there are eager hosts awaiting you to minister to your needs. Fortunatus can pick out his very bedroom from the pictured pile—John Citizen can choose his modest inn.

There is nothing in the whole range of literature to compare with this!

Another thrilling instalment by the author of Clowns in Council and Sawdust Statesmen.

Here they go again! The Umbrella Man and his rapscallion gang debating this, that, and the other, as they tumble, and hold High Revel for our readers' delight. Thrills, romps, desperate mock battles, misunderstandings, and always a happy ending ; with such a vein of wild rollicking irresponsible good humour running through it all, that we have to laugh aloud.

Do you remember Slippery Jack the cashier, who can keep three double negatives in the air at the same time? And the " Great Degausser " who wrestled a fall with a soldier and was given an admiral's hat? And the Seer of Churt, and Glasgow Jimmie with his Red men? On they go, laughing, quarrelling, arguing, all our old friends, and better than ever. It's the greatest serial since Pickwick!

It is seldom wise for a publisher to adopt the role of prophet. On three previous occasions, however, I have ventured to foretell the success of books published by this House. The first was the National Service Handbook, whose sales beat all previous records. The second—but I was wrong about the second, so had better not name it. The third was the Blue Book issued after the outbreak of war, which sold out long before a second printing could be prepared. In the hope, therefore, of succeeding in three cases out of four, I confidently predict an unprecedented demand for HANSARD.—Neville Chamberlain.