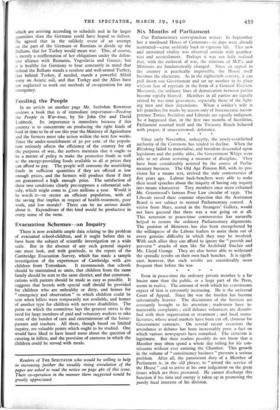 Our Parliamentary correspondent writes : In September last a moribund House of Commons—its days were already numbered—came suddenly back to vigorous life. This new and unwonted vitality was observed outside with gratifica- tion and astonishment. Perhaps it was not fully realised that, with the outbreak of war, the relations of M.P.s and Ministers are fundamentally changed. Since an appeal to the country is practically impossible, the House itself becomes the electorate. As in the eighteenth century, it can pull down one Government and set up another in its place without fear of reprisals in the form of a General Election. Moreover, the ordinary lines of demarcation between parties become rapidly blurred. Members in all parties are equally stirred by war-time grievances, especially those of the fight- ing men and their dependents. When a soldier's wife is left penniless for weeks by reason only of bureaucratic incom- petence Tories, Socialists and Liberals are equally indignant. So it happened that, in the first two months of hostilities, Parliament asserted itself and the Treasury Bench behaved with proper, if unaccustomed, deference.