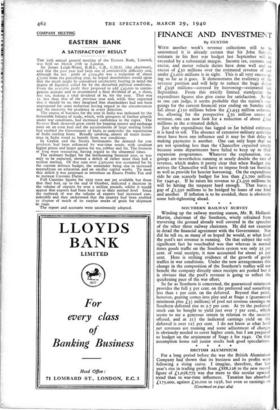 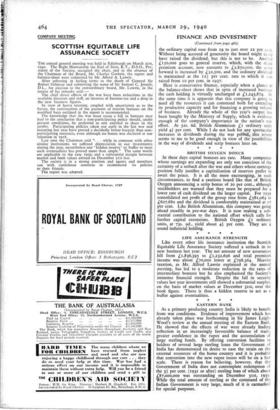 For a long period before the war the British Aluminium Company had shown that its business and its profits were following a rising curve. I imagine, therefore, that last year's rise in trading profit from £888,126 to the new record figure of £1,058,772 was due more to this secular upward trend than to war-time influences. Taxation has absorbed £175,000, against(5c ed on Page o in r 938,e 464 but even so earnings on FINANCE AND INVESTMENT (Continued from page 462) the ordinary capital rose from 19 to just over 22 per cent, Without being accused of generosity the board might ea-,ilv have raised the dividend, but this is not to be. Another so,000 goes to general reserve, which, with the share premium account, now amounts to £2,850,000, the carry forward is increased by £32,500, and the ordinary dividend is maintained at the I24 per cent. rate to which it was raised from r o per cent. in 1937.

Here is conservative finance, especially when a glance at the balance-sheet shows that in spite of increased business the cash holding is virtually unchanged at £1,243,874. At the same time it is apparent that this company is going to need all the resources it can command both for extending its productive capacity and for financing a growing volume of business. Already the whole of this year's output has been bought by the Ministry of Supply, which is evidence enough of the company's importance in the nation's war effort. At 52s. 6d. British 'Aluminium Li ordinary units yield 4f per cent. While I do not look for any spectacular increases in dividends during the war peilisd, this return seems to me to be good enough in view of the possibilities in the way of dividends and scrip bonuses later on.