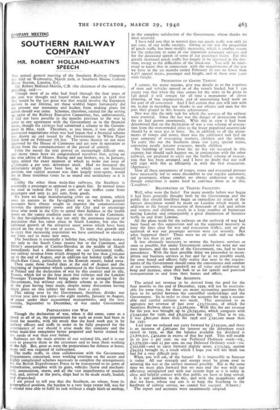 THE annual general meeting of the Southern Railway Company was held on Wednesday, March zoth, at Southern House, Cannon Street Station, London, E.C. Mr. Robert Holland-Martin, C.B. (the chairman of the company), presiding, said:— Though most of us who had lived through the four years of the past war thought and hoped when that ended in 1918 that that would be the last great war that would involve the European nations in our lifetime, yet those wishful hopes fortunately did not prevent our statesmen and leaders from making plans for action should war come. Schemes, therefore, existed for the setting up again of the Railway Executive Committee, but, unfortunately, it had not been possible in the months previous to the war to come to any agreement with the Government as to the financial terms, though the railways had submitted a scheme to the Govern- ment in May, 1938. Therefore, as you know, it was only after protracted negotiations when war had begun that a financial scheme was drawn up and issued by the Government in White Paper Cmd. 6168 on February 7th last. The terms therein set out were approved by the House of Commons and are now in operation as dating from the commencement of the period of control.

From the outset the year proved an increasingly difficult one, and many times have we congratulated ourselves that, acting on the wise advice of Messrs. Baring and our brokers, we, in January, 1939, seized the exact moment at which to make our issue of L7,500,000 4 per cent. debenture stock. Had we hesitated the opportunity might have been lost, in which case our financial position, our capital account was then largely over-spent, would not in these troublous times be so sound and satisfactory as it is today.

Unlike the other three main-line railways, the Southern is essentially a passenger as opposed to a goods line. In normal times we used to reckon that 75 per cent. of our traffics came from passengers and only 25 per cent. from goods.

We have no large manufacturing cities on our system, which owes its success to the far-sighted way in which its general managers have always sought to improve the communications between the dormitory towns and the City and to encourage those who work in the City to spend their holidays in the health towns on the sunny southern coast or on visits to the Continent. To that far-sightedness is due not only the enormous increase of population that has taken place in South London, but also the continual growth of the attractive coast towns which have been placed on the map by ease of access. To meet that growth and to carry that increasing population we have continued to electrify our lines and to make new ones.

The Southern is essentially a holiday line, taking holiday makers not only to the South Coast resorts but to the Continent, and Hitler's annexation of Czecho-Slovakia in the middle of March immediately had a disastrous effect on our Continental traffic, our railway revenue from which dropped by no less than £toopoo up to the end of August, and in addition our holiday traffic to the South-East Coast, particularly to the Kentish resorts, faded away.

Then came those fateful days at the end of August and the beginning of September which culminated in the German invasion of Poland and the declaration of war by this country and its ally, France, which led to the four main line railways and the London Passenger Transport Board being taken over as arranged by the Government, but without any definite scheme as to the finance of the plan having been made, despite many disi.ussions having taken place on this subject for more than a year.

This taking over by the Government, therefore, divides our railway year into two parts—the eight months, January to August, of peace under their accustomed managements, and the four months, September to December, of war under Government control.

Though the declaration of war, when it did come, came as a shock to all of us, the preparations for such an event had been in hand for months, with the result that the hard work put in by railway officers and staffs in order to be fully prepared for the contingency of war should it arise made this company and the other main-line companies better prepared and better trained for the needs of war than ever before.

Railways are the main arteries of our national life, and it is our care to preserve them to the uttermost and to keep them working to the full. But, great as were the preparations for defence at home, more still was required of railwaymen.

The traffic staffs, in close collaboration with the Government Departments concerned, were working overtime on the secret and highly complicated schemes necessary to complete the arrangements for the British Expeditionary Force to be transported to its ports of embarkation,. complete with its guns, vehicles (horse and mechani-

cal), ammunition' stores, and all the vast impedimenta of modern war, and, arrived at the ports, ships had to be made ready, loaded, and dispatched. I am proud to tell you that the Southern, on whom, from its geographical position, the burden to a very large extent fell, was for a second time able to fulfil its task without a single hitch or mishap,

to the complete satisfaction of the Government, whose thanks we have received.

I have told you that in normal days our goods traffic was only 25 per cent. of our traffic receipts. Owing to the war the proportion of goods traffic has been steadily increasing, which is another reason for the reduction in some of our important passenger services and for the decreased speeds of some of our passenger trains. For this greatly increased goods traffic has largely to be operated in the day- time, owing to the difficulties of the black-out. You will be inter- ested to know that in connection with the requirements of the war we have in the six months ended February 20 run no fewer than 6,377 special trains, passenger and freight, and of these over 5,000 were freight.

I cannot, for many reasons, give you details as to the rurnbers of men and vehicles moved or of the vessels loaded, but I can assure you that when the time comes for the story to be given in full detail it will remain for all time a monument of clever planning, of fine organisation, and of unremitting hard work on the part of all concerned. And I feel certain that you will join with me to day in recording our thanks to our officers and men for the part they played in this historic achievement.

Nor was this the only task for which the services of the railway were essential. Since the last war the danger of destruction from the air had grown enormously. With this in view it had been determined that on the declaration of war a vast scheme of evacua- tion from the overcrowded cities to the lesser populated countryside should be at once put in force. So, in addition to all the move- ments of troops and stores, there was the additional task laid on your company of evacuating mothers, children and the infirm. To carry this out the Southern alone ran 1,014 special trains, conveying nearly 300,000 evacuees, mostly children No bombing of towns from the air has yet occurred in this country, but should such happen we, in conjunction with the other railways, are prepared to carry out the further scheme of evacua- tion that has been arranged, and I have no doubt that our staff will cope with this as efficiently as with the first evacuation. (Applause.) Now all these movements of troops, stores and evacuated persons have necessarily led to some discomfort to our regular customers, our passengers, whose comfort we always endeavour to study, though sometimes it seems hard to convince them as to this. (Laughter.)

Well, what were the facts? For many months before war began it had been generally thought both by the Government and the public that should hostilities begin an immediate air attack of the fiercest description would be made on London which would, in addition to the forced evacuation of thousands of sick and infirm and women and children, result in a large number of businesses leaving London and consequently a great diminution of business traffic to and from London.

It was obviously necessary to restore the business services as soon as possible, but under Government control we were not our own masters, and the needs of the Government, too, had to have precedence. With the least possible delay we proceeded to recon- stitute our business services as fast and far as we possibly could, for your board and officers fully realise that next to the require- ments of the Government should come the convenience and comfort of our customers, whose goodwill we all value and endeavour to keep and increase, since they look to us for speedy and punctual transportation to and from their homes and offices.

The actual net revenue to be derived from the pool for the four months to the end of December, 1939, will not be ascertain- able for some time, for there are many accounting questions that

What, you will ask, of the future? It is impossible to forecast it today. All our strength and energy must be given over to winning the war at the earliest moment possible. But at the same time we must plan forward that we may end the war with our efficiency unimpaired and with our system kept as it is today in close and helpful contact with that public we have so long served.

It is our ambition to do this, and with the magnificent staff that we have, whose one aim is to keep the Southern in the forefront of railway service, we cannot but succeed. (Cheers.)