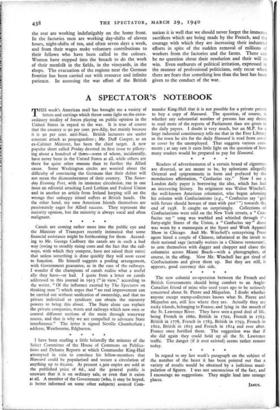 Page 6, 29 March 1940 — The new colonial co-operation between the French and British Governments
Close

The new colonial co-operation between the French and British Governments

should bring comfort to an Anglo- Canadian friend of mine who used years ago to be seriously concerned about St. Pierre and Miquelon. I doubt whether anyone except stamp-collectors knows what St. Pierre and Miquelon are, still less where they are. Actually they are rocky islands, belonging to France, and lying in the mouth of the St. Lawrence River. They have seen a good deal of life. being French in 166o, British in 17p2, French in 1763, British in 1778, French in 1783, British in 1793, French in 18oz, British in 1803 and French in 1814 and ever after. France once fortified them. The suggestion was that if she did again they could hold up all the St. Lawrence traffic. The danger (if it ever existed) seems rather remote today.