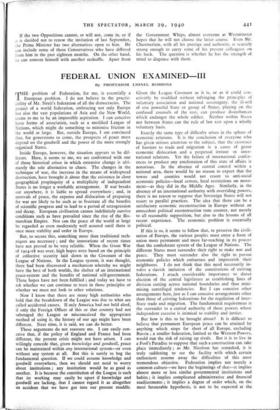 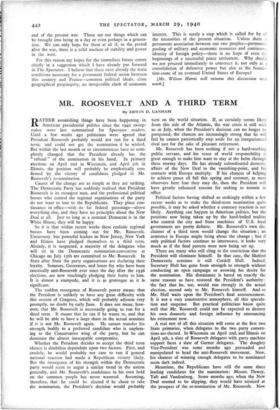 THE problem of Federation, for me, is essentially a European problem. I do not believe in the practic- ability of Mr. Streit's federation of all the democracies. The project of a world federation, embracing not only Europe but also the vast populations of Asia and the New World, seems to me to be an impossible aspiration. I can conceive loose forms of association, such as a modified League of Nations, which might do something to minimise friction in the world at large. But, outside Europe, I am convinced that, for generations to come, the prospects of peace must depend on the goodwill and the power of the more strongly organised States.

Inside Europe, however, the situation appears to be dif- ferent. Here, it seems to me, we are confronted with one of those historical crises in which extensive change is ulti- mately the sole alternative to chaos. The changes in the technique of war, the increase in the means of widespread destruction, have brought it about that the existence in close geographical propinquity of a multiplicity of independent States is no longer a workable arrangement. If war-breaks out anywhere, it is liable to spread everywhere ; and, in mtervals of peace, the expense and dislocation of preparing for war are likely to be such as to frustrate all the benefits of scientific progress and to lead to a period of retrogression and decay. European civilisation cannot indefinitely survive conditions such as have prevailed since the rise of the Bis- marckian Empire. Nor can the peace of the world at large be regarded as even moderately well assured until there is once more stability and order in Europe.

But, to secure this, something more than traditional tech- niques are necessary ; and the innovations of recent times have not proved to be very reliable. When the Great War of 1914-18 was over, high hopes were based on the principle of collective security laid down in the Covenant of the League of Nations. In the League system, it was thought, there had been discovered a mechanism whereby we might have the best of both worlds, the shelter of an international peace-system and the benefits of national self-government. These hopes have not been fulfilled ; and today we have to ask whether we can continue to trust in those principles or whether we must not look to other solutions.

Now I know that there are many high authorities who hold that the breakdown of the League was due to what are called accidental causes. If only America had not held aloof, if only the Foreign Offices of this or that country had not sabotaged the League or misconceived the appropriate method of using it, the history of our age might have been different. Next time, it is said, we can do better.

These arguments do not reassure me. I can easily con- ceive that, if the policy of England and France had been different, the present crisis might not have arisen. I can willingly concede that, given knowledge and goodwill, peace can be maintained within any international system—or even without any system at all. But this is surely to beg the fundamental question. If we could assume knowledge and goodwill everywhere, then we should not need to worry about institutions ; any institution would be as good as another. It is because the constitution of the League is such that its working may easily be upset if knowledge and goodwill are lacking, that I cannot regard it as altogether an accident that we have got into our present muddle. Given the League Covenant as it is, or as it could con- ceivably be modified without infringing the principles of voluntary association and national sovereignty, the of one powerful State or group of States, playing on the confused counsels of the rest, can produce disturbances which endanger the whole edifice. Neither within States nor between States can the rule of law rest upon a wholly voluntary basis.

Exactly the same type of difficulty arises in the sphere of economic relations. It is the conclusion of everyone who has given serious attention to the subject, that the existence of barriers to trade and migration is a cause of grave economic dislocation and a perpetual irritant in inter- national relations. Yet the failure of international confer- ences to produce any amelioration of this state of affairs is notorious. In the absence of central control within a national area, there would be no reason to expect that the towns and counties would not resort to anti-social economic policies—local octrois, local restrictions on move- ment—as they did in the Middle Ages. Similarly, in the absence of an international authority with overriding powers, there is no reason to suppose that Sovereign States will not resort to parallel practices. The idea that there can be a satisfactory economic reconstruction in Europe without an antecedent political reconstruction runs counter, not merely to all reasonable supposition, but also to the lessons of all recent experience. The economic problem is essentially political.

If this is so, it seems to follow that, to preserve the civili- sation of Europe, the various peoples must enter a form of union more permanent and more far-reaching in its powers than the confederate system of the League of Nations. The different States must surrender their right to make war and peace. They must surrender also the right to pursue economic policies which embarrass and impoverish their neighbours. I do not think that this need necessarily in- volve a slavish imitation of the constitutions of existing federations. I attach considerable importance to direct election of the central legislature as establishing lines of division cutting across national boundaries and thus mini- mising centrifugal tendencies. But I can conceive other arrangements here, just as I can conceive arrangements other than those of existing federations for the regulation of inter- State trade and migration. The fundamental requirement is the surrender to a central authority of those powers whose independent exercise is inimical to stability and justice.

But how is this to be brought about? It is difficult to believe that permanent European peace can be attained by anything which stops far short of all Europe, excluding Russia ; a smaller federation, limited to the Western Powers, would run the risk of raising up rivals. But it is to live in a Fool's Paradise to suppose that such a construction can take place immediately ; as Mr. Nicolson has remarked, it is truly saddening to see the facility with which certain enthusiasts assume away the difficulties of this most tremendous objective. Federation implies not merely a common culture—we have the beginnings of that—it implies almost more or less similar governmental institutions and habits ; it implies complicated administrative and financial readjustments ; it implies a degree of order which, on the most favourable hypothesis, is not to be expected at the end of the present war. These are not things which can be brought into being in a day or even perhaps in a genera- tion. We can only hope for them at all if, in the period after the war, there is a solid nucleus of stability and power in the west.

For this reason my hopes for the immediate future centre chiefly in a suggestion which I have already put forward. in The Spectator. I believe That there exist already the main conditions necessary for a permanent federal union between this country and France—common political ideals, close geographical propinquity, no insuperable clash of economic interest. This is surely a step which is called for by a' the necessities of the present situation. Unless there permanent association between our two peoples—permaner - pooling of military and economic resources and continuo.: identity of foreign policy—there is . no hope of even- ti beginnings of a successful peace settlement. Why shou.. we not proceed immediately to construct it, not only as consolidation of defensive power but also as the found - tion-stone of an eventual United States of Europe?