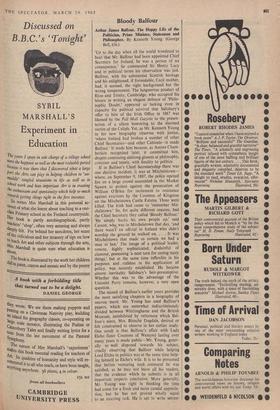 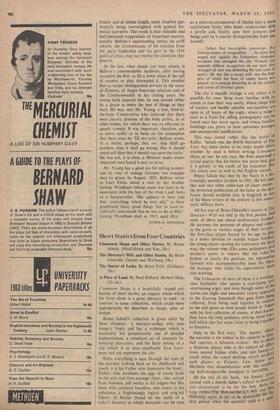 `Up to the day when all the world wondered to hear that Mr. Balfour had been appointed Chief

Secretary for Ireland, he was a person of no

consequence.' So commented Sir Henry Lucy and in political terms his observation was just.

Balfour, with his substantial Scottish heritage and his enlightened, if formidable, Cecil mother, had, it seemed, the right background but the

wrong temperament. The languorous product of Eton and Trinity, Cambridge, who occupied his leisure in writing an elegant defence of 'Philo- sophic Doubt,' appeared so lacking even in capacity for political survival that Salisbury's offer to him of the Irish Office in 1887 was likened by the Pall Mall Gazette to the presen- tation of a silken bowstring to the doomed victim of the Caliph. Yet, as Mr. Kenneth Young in his new biography observes with justice, `where Ireland had broken a number of other Chief Secretaries—and other Cabinets—it made Balfour.' It made him because, as Austen Cham- berlain recognised later, it committed him, despite continuing sidelong glances at philosophy, criticism and tennis, with finality to politics.

If in Balfour's Chief Secretaryship -there was one decisive incident, it was at Mitchelstown- where, on September 9, 1887, the police opened fire on a large crowd assembled in the Market Square' to protest against the prosecution of William O'Brien for incitement to resistance against evictions by the Countess of Kingston on the Mitchelstown Castle Estates. Three were killed. The Irish had cause to 'remember Mit- chelstown.' So, for quite different reasons, had the Chief Secretary they called 'Bloody Balfour.' `He simply backs his own people up,' said Carson, who was in Mitchelstown that day, 'and there wasn't an official in Ireland who didn't worship the ground he walked on. . . . It was Mitchelstown that made us certain we had a man at last.' The image of a political leader, remote, highly sophisticated, disdainful of clamour, possessing 'a neat turn for saying nasty things,' but at the same time inflexible in his purposes and , ruthless in his application of policy, was securely established. He became almost inevitably Salisbury's heir-presumptive. Whether this was to the advantage of the Unionist Party remains, however, a very open question.

The record of Balfour's earlier years provides the most satisfying chapters in a biography of uneven merit. Mr. Young has used Balfour's papers, which are somewhat indiscriminately divided between Whittinghame and the British Museum, uninhibited by reticences which Bal- four's niece, Mrs. Blanche Dugdale, desired or felt constrained to observe in her earlier study. One result is that Balfour's affair with Lady Elcho (later Countess of Wemyss) lasting over many years is made public—Mr. Young, gener- ally so well disposed towards his subject, cruelly observing that Balfour while helping Lord Elcho in politics was at the same time help- ing himself. to Elcho's wife. It is to be presumed that before venturing such comment he was satisfied, as he may not leave all his readers, that the evidence which he submits is in all important respects conclusive. More generally, Mr. Young was right in thinking the time had come for a fresh and more candid apprecia- tion, but he has not proved wholly equal to an exacting task. He is apt to write senten-

tiously and at undue length, some chapters par- ticularly being overweighted with general his- torical narrative. The result is that valuable and well-balanced reappraisals of important matters, notably Balfour's equivocating tactics on tariff reform, the circumstances of his eviction from the party leadership and his part in the 1916 political crisis, may not receive the attention they deserve.

At the last, what stands out most clearly is Balfour's commendable readiness, after having occupied the first. to fill a lower place if the call of country or duty demanded it. This enabled him to render distinguished services in the cause of Zionism, of Anglo-American relations and of the Commonwealth in his closing years. No strong faith inspired him; he was moved rather by a desire to make the best of things as they were. He was, says Mr. Young, a true, bred-in- the-bone Conservative who believed that there were chronic diseases of the body politic, as of other bodies, for which there was no effectual or speedy remedy. it was important. therefore, not to move rashly or in haste on the assumption that there must be. 'Of two evils,' Balfour wrote, 'it is better, perhaps, that our ship shall go nowhere than it shall go wrong; that it should stand still than that it should run upon the rocks.' He was not, it is clear, a Minister under whom impatient men found it easy to serve.

Mr. Young has a good eye for telling incident and by way of strange footnote one example may be given. In August, 1892, Balfour wrote to Lady Elcho about a visit by her brother George Wyndham (whose name was later to be associated with the last of the Irish Land Acts) to a fortune-teller. 'She appears to have told him "everything which he ever did," to have prophesied many good things, but to have in- cidentally announced that he was to die at fifty!' George Wyndham died in 1913, aged fifty.