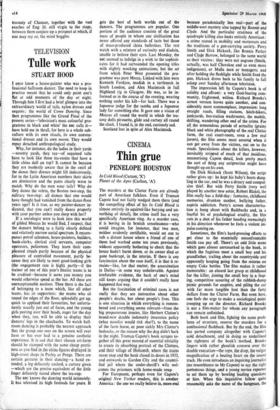 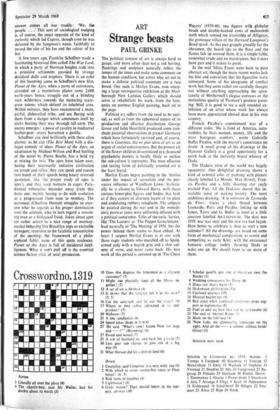 In Cold Blood (Curzon, 'X') Planet of the Apes (Carlton, 'A') The murders at the Clutter Farm are already part of American folklore. Even if Truman Capote had not fairly wedged them there (and the compelling effect of his In Cold Blood is almost entirely its squirrel-like burying and un- earthing of detail), the crime itself has a very specifically American ring. As a murder case, it is boring in its brutish senselessness—who could imagine, for instance, that two men, neither evidently certifiable, would set out to rob a distant house where a friend of one of them had worked some ten years previously, without apparently bothering to check that the house hadn't burnt down, or its owner died or gone bankrupt, in the interim. If there is any fascination about the case itself, it is that it re- mains—like, for that matter, the assassination in Dallas—in some way unbelievable. Against irrefutable evidence, the back of one's mind still keeps arguing that it couldn't really have happened that way.

But the fascination of criminal cases is not really that they are instructive about other people's deaths, but about people's lives. This is one situation in which everything is remem- bered and everything seems relevant—from the big preposterous ironies, like Herbert Clutter's brand-new double indemnity insurance policy (what novelist would risk that?), to the name of the farm horse, or poor sickly Mrs Clutter's bedsocks, or the reason why the dog didn't bark in the night. Truman Capote's book scrapes to- gether all this great mound of essential triviality to create its absorbing portrait of the Clutters, and their village of Holcomb, where the trains never stop and the bank closed its doors in 1933, and outwards to Garden City and the countri- fied jail where the under-sheriff's wife wel- comes the prisoners with home-made soup.

For Europeans, perhaps even for Capote's original New Yorker readers, this is another America : the one we really believe in, more real

because paradoxically less real—part of the middle-west mystery also tapped by Bonnie and Clyde. And the particular craziness of the quadruple killing also looks entirely American: a crime rooted in mobility and motorcars and the traditions of a gun-carrying society. Perry Smith and Dick Hickock, like Bonnie Parker and Clnie Barrow, belonged to the same world as their victims: they were not negroes (Smith, actually, was half Cherokee and so even more indigenous), or Mafia men or teenagers; and after holding the flashlight while Smith fired the gun, Hickock drove back to his family to fall asleep over Sunday afternoon television.

The impression left by Capote's book is of solidity and affront: a very God-fearing com- munity, frightened, witless. Richard Brooks's screen version leaves quite another, and con- siderably more commonplace, impression: long straight roads, filling stations, hitch-hikers, junkyards, bus-station washrooms, the mobile, drifting, wandering other end of the crime. For all the tremendous parade of actuality (grainy black and white photography of the real Clutter farm, the real court-room, even a few real jurors), the film seems most assured when it can get away from the victims, out on to the roads. Speculations about the killers, however, inevitably stripped of much of that insidious, mesmerising Capote detail, look pretty much the sort of thing any soriptwriter might have thought up on his own.

On Dick Hickock (Scott Wilson), the script rather gives up : he kept his baby's boots dang- ling in the car, and he was a dreary and compul- sive thief. But with Perry Smith (very well played by another new actor, Robert Blake), the film really has a field-day: fantasies, childhood memories, drunken mother, bullying father, aspirin addiction. Perry's screen characterisa- tion is hung about with flashbacks and, in a fearful bit of psychological crudity, the film cuts in a shot of his father heading menacingly in his direction whenever he feels a violent im- pulse coming on.

Sometimes, the film's hard-pressing efforts to get close to the essentially unconfrontable Smith can pay off. There's an odd little scene which goes almost unremarked in the book, in which the fugitives meet a small boy and his grandfather, trailing about the countryside and apparently keeping going from the returns on empty Coke bottles. The film makes it rather

for the killer, joining the small boy in a leap- ing, competitive scouring of the rubbish-dump picnic grounds for empties, and piling the car with far more tangible loot than the forty dollars from the Clutter Farm. But even here, one feels the urge to make a sociological point creeping up on the director. Richard Brooks is not a film-maker for whom any paragraph can remain unfinished.

Both book and film, fighting the same prob- lems of structure, reserve the murders for a confessional flashback. But by the end, the film has parted company altogether with Capote's cold detachment, and in doing so underlined the rightness of the book's method. Brooks lingers with rather ghoulish concern over the double execution—the rope, the drop, the vulgar magnification of a beating heart on the sound track. He even introduces an inquiring journalist (no resemblance to Mr Capote) to say the right portentous things, and a young novice reporter to set them up by bowling leading questions at him. When this inquisitive fellow quite reasonably asks the name of the hangman, the

answer comes all too readily : 'We, the people. . . .' This sort of sociological nudging is, of course, the exact opposite of the kind of curiosity which led Capote, though even he was defeated by the hangman's name, faithfully to record the size of his fee and the colour of his hat.

A few years ago, Franklin Schaffner made a fascinating historical film called The War Lord, in which a party of Norman knights rode into a primitive settlement guarded by strange druidical dolls and trophies. There is an echo of this haunting scene in Schaff.ner's new film, Planet of the Apes, when a party of astronauts, stranded on a mysterious planet some 2,000 earth-years hence, struggle out of a blinding rock wilderness towards the menacing scare- crow totems which defend its inhabited area. Within minutes, they have encountered a mute, pitiful, dishevelled tribe, and are fleeing with them from a danger which announces itself by sticks beating their way through tall corn. The enemy emerges: a posse of cavalry in mediaeval leather-gear---every horseman a gorilla.

Schaffner can deal brilliantly with these alien alarms; as he can (The Best Man) with a dia- logue comedy of ideas. Planet of the Apes, an adaptation by Michael Wilson and Rod Sterling of the novel by Pierre Boulle, has a bold try at mixing the two. The apes have taken over, basing their necessarily imitative civilisation on scraps and relics; they can speak and reason (too much of their speech being hoary reversed quotation, like 'the proper study of apes is apes'), and they keep humans in cages. Para- doxical tributaries meander away from this basic one, mainly having to do with evolution as a progression from man to monkey. The astronaut (Charlton Heston) struggles to exer- cise what he regards as his proper domination over the animals, who in turn regard a reason- ing man as a biological freak. Jokes about apes (or rather actors in a nice range of monkey- masks) behaving like Brooklyn cops or excitable teenagers; reversion to the fatalistic romanticism of the opening; the framework of a philo- sophical fable; none of this. quite coalesces. Planet of the Apes is full of incidental intel- ligences. What it can't pull off is the essential science fiction trick of ,total persuasion.