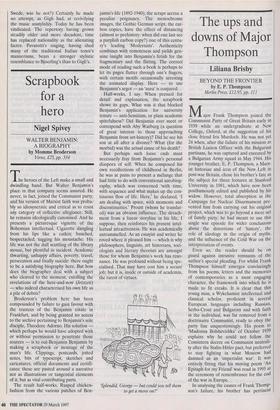 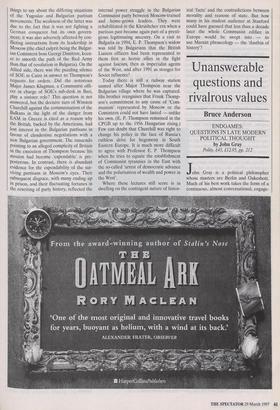 The ups and downs of Major Thompson

BEYOND THE FRONTIER by E. P. Thompson Merlin Press, £12.95, pp. 111 ajor Frank Thompson joined the Communist Party of Great Britain early in 1939 while an undergraduate at New College, Oxford, at the suggestion of his close friend Iris Murdoch. He was not yet 24 when, after the failure of his mission as British Liaison Officer with the Bulgarian partisans, he was captured and executed by a Bulgarian Army squad in May 1944. His younger brother, E. P. Thompson, a Marx- ist historian and icon of the New Left in post-war Britain, chose his brother's fate as the subject for three lectures at Stanford University in 1981, which have now been posthumously edited and published by his widow. However, total absorption in the Campaign for Nuclear Disarmament pre- vented him from carrying out his original project, which was to go beyond a mere act of family piety; he had meant to use this single war episode for wider conclusions about the distortions of 'history', the role of ideology in the origin of myths, and the influence of the Cold War on the interpretation of events.

Even so, the reader should be on guard against intrusive remnants of the author's special pleading. For whilst Frank Thompson himself emerges convincingly from his poems, letters and the memories of contemporaries as a most engaging character, the framework into which he is made to fit creaks. It is clear that this young man, a Wykehamist intellectual and classical scholar, proficient in several European languages including Russian, Serbo-Croat and Bulgarian and with faith in the individual, was far removed from a doctrinaire Communist, ready to obey the party line unquestioningly. His poem to 'Madonna Bolshevichka' of October 1939 explains why he could not follow the Comintern decree on Communist neutrah- ty after the Stalin-Hitler pact, but preferred to stay fighting in what Moscow had damned as an 'imperialist war'. It was entirely fitting that his moving poem 'An Epitaph for my Friend' was read in 1995 at the ceremony of remembrance for the end of the war in Europe.

In analysing the causes of Frank ThomP- son's failure, his brother has pertinent

things to say about the differing situations of the Yugoslav and Bulgarian partisan movements. The weakness of the latter was due to the fact that it was not fighting a German conqueror but its own govern- ment; it was also adversely affected by con- flicting instructions from its leadership in Moscow (the chief culprit being the Bulgar- ian Comintern boss Georgi Dimitrov, keen- er to smooth the path of the Red Army than that of revolution in Bulgaria). On the Allied side, there was the puzzling silence of SOE in Cairo in answer to Thompson's requests for orders. Did the notorious Major James Kingman, a Communist offi- cer in charge of SOE's sub-desk in Bari, play a sinister role? This question is not answered, but the decisive turn of Winston Churchill against the communisation of the Balkans in the light of the danger from EAM in Greece is cited as a reason why the British, backed by the Americans, had lost interest in the Bulgarian partisans in favour of clandestine negotiations with a new Bulgarian government. The innuendo Pointing to an alleged complicity of Britain in the execution of Thompson because his mission had become 'expendable' is pre- posterous. In contrast, there is abundant evidence for the expendability of the sur- viving partisans in Moscow's eyes. Their subsequent disgrace, with many ending up in prison, and their fluctuating fortunes in the rewriting of party history, reflected the internal power struggle in the Bulgarian Communist party between Moscow-trained and home-grown leaders. They were rehabilitated in the Khrushchev era when a partisan past became again part of a presti- gious legitimating ancestry. On a visit to Bulgaria in 1994, E. P. Thompson's widow was told by Bulgarians that the British Liaison officers had been represented to them first as heroic allies in the fight against fascism, then as imperialist agents of the West, and after 1991 as stooges for Soviet influence!

Today there is still a railway station named after Major Thompson near the Bulgarian village where he was captured. His brother recognises that Frank Thomp- son's commitment to any cause of 'Com- munism' represented by Moscow or the Comintern could not have lasted — unlike his own. (E. P. Thompson remained in the CPGB up to the 1956 Hungarian rising.) Few can doubt that Churchill was right to change his policy in the face of Russia's ruthless drive for hegemony in South Eastern Europe. It is much more difficult to agree with Professor E. P. Thompson when he tries to equate the establishment of Communist tyrannies in the East with the so-called 'arrest of democratic advance and the polarisation of wealth and power in the West'.

ical 'facts' and the contradictions between morality and reasons of state. But how many in his student audience at Stanford could have guessed that less than a decade later the whole Communist edifice in Europe would be swept into — to use Marxist phraseology — the 'dustbin of history'?