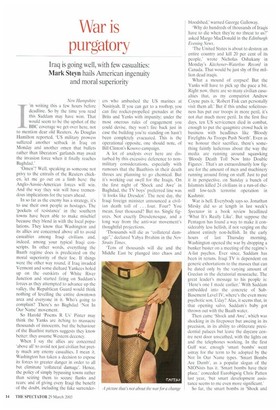 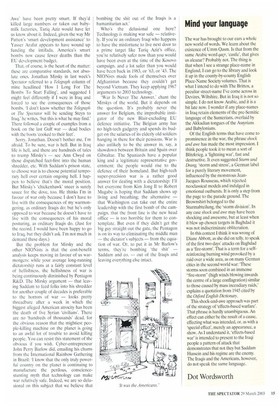 1 'm writing this a few hours before deadline. So by the time you read this Saddam may have won. That would seem to be the upshot of the BBC coverage we get over here, not to mention dear old Reuters. As Douglas Hamilton reported, 'US military prowess suffered another setback in Iraq on Monday and another omen that bullets rather than liberators' garlands may await the invasion force when it finally reaches Baghdad.'

'Omen'? Well, speaking as someone not privy to the entrails of the Reuters chicken, let me go out on a limb here: the Anglo-Aussie-American forces will win. And the way they win will have tremendous implications for the years ahead.

In so far as the enemy has a strategy, it's to use their own people as hostages. The 'pockets of resistance' in the southern towns have been able to make mischief because they blend in with the local populations. They know that Washington and its allies are concerned above all to avoid casualties among Iraqi civilians and, indeed, among your typical Iraqi conscripts. In other words, everything the Baath regime does is predicated on the moral superiority of their foe. If things were the other way round, if Iraq invaded Vermont and some diehard Yankees holed up on the outskirts of White River Junction and started firing on Saddam's forces as they attempted to advance up the valley, the Republican Guard would think nothing of levelling the entire downtown area and everyone in it. Who's going to complain? There's no Baghdad 'Not In Our Name' movement.

So Harold 'Poems R Us' Pinter may think the Yanks are itching to massacre thousands of innocents, but the behaviour of the Baathist nutters suggests they know better: they assume Western decency.

When I say the allies are concerned 'above all' to avoid not just civilian but pretty much any enemy casualties. I mean it. Washington has taken a decision to expose its forces to greater danger in order to all but eliminate 'collateral damage'. Hence, the policy of simply bypassing towns rather than seizing them to secure flanks and rears; and of giving every Iraqi the benefit of the doubt, including the fake surrender

ers who ambushed the US marines at Nasiriyah. If you can get to a rooftop, you can fire rocket-propelled grenades at the Brits and Yanks with impunity: under the most onerous rules of engagement you could devise, they won't fire back just in case the building you're standing on hasn't been completely evacuated. This is the operational opposite, one should note, of Bill Clinton's Kosovo campaign.

A lot of analysts over here are disturbed by this excessive deference to nonmilitary considerations, especially with rumours that the Baathists in their death throes are planning to go chemical. But it's working out swell for the Iraqis. On the first night of 'Shock and Awe' in Baghdad, the TV boys' preferred line was 'it looks like Dresden'. The next day, the Iraqi foreign minister announced a civilian death toll of . . . four. Four? You mean, four thousand? But no. Single figures. Not exactly Dresdenesque, and a long way from the anti-war movement's thoughtful projections.

'Tens of thousands will die and the Middle East be plunged into chaos and bloodshed,' warned George Galloway.

'Why do hundreds of thousands of Iraqis have to die when they're no threat to us?' asked Margo MacDonald in the Edinburgh Evening News.

'The United States is about to destroy an entire country and kill 20 per cent of its people,' wrote Nicholas Oshukany in Monday's Kitchener—Waterloo Record in Canada. That would be just shy of five million dead iraqis.

What a mound of corpses! But the Yanks will have to pick up the pace a bit. Right now, there are so many civilian casualties that, as my compatriot Andrew Coyne puts it, 'Robert Fisk can personally visit them all.' But if this undue solicitousness has put our troops in more peril, it's not that much more peril. In the first five days, ten US servicemen died in combat, enough to put the quagmire crowd back in business with headlines like 'Bloody Firefights As Troops Push North'. Even as we honour their sacrifice, there's something faintly ludicrous about the way the media are running around squawking 'Bloody Death Toll Now Into Double Figures'. That's an extraordinarily low figure for the amount of men and machinery running around firing on stuff. Just to put it in perspective, on Sunday a bunch of Islamists killed 24 civilians in a run-of-themill low-tech terrorist operation in Kashmir.

War is hell, Everybody says so. Jonathan Mirsky did so at length in last week's Spectator in a book review headlined 'What It's Really Like'. But suppose the Pentagon has found a way to make it considerably less hellish, if not verging on the almost entirely non-hellish. In the early hours of last Thursday morning, Washington opened the war by dropping a bunker buster on a meeting of the regime's A-list psychos. Ever since, Saddam has been in reruns. Iraqi TV is dependent on generic exhortations to the masses that can be dated only by the varying amount of Grecian in the dictatorial moustache. The great leader's message to his people is: 'Here's one I made earlier.' With Saddam embedded into the concrete of SubBasement Level IV, where's the even more psychotic son, Uday? Alas, it seems that, in that opening salvo, Saddam's baby got thrown out with the Baath water.

Then came 'Shock and Awe', which was shocking in its firepower but aweing in its precision, in its ability to obliterate presidential palaces but leave the daycare centre next door unscathed, with the lights on and the telephones working. In the first Gulf war, enough 'smart bombs' went astray for the term to be adopted by the Not In Our Name types. 'Smart Bombs Are Dumb', as a popular slogan of the NIONists has it. 'Smart bombs have their place,' conceded Eurobigwig Chris Patten last year, 'but smart development assistance seems to me even more significant.'

So far, the smart bombs in 'Shock and Awe' have been pretty smart. If they'd killed large numbers or taken out babymilk factories, Tariq Aziz would have let us know about it. Indeed, given the way Mr Patten's 'smart development assistance' to Yasser Arafat appears to have wound up funding the intifada, America's smart bombs now cause fewer deaths than the EU development budget.

That, of course, is the heart of the matter: these are comparative standards, not absolute ones. Jonathan Mirsky in last week's Spectator referred to a Telegraph column of mine headlined 'How I Long For The Bombs To Start Falling', and suggested I might feel differently if I were in Iraq and forced to see the consequences of those bombs. 1 don't know whether the Telegraph or The Spectator will be sending Steyn to Iraq,' he writes, 'but this is what he may find.' There followed a couple of examples from a book on the last Gulf war — dead bodies with the boots 'cooked to their feet'.

Sorry. Jonathan, Doesn't bother me, I'm afraid. To be sure, war is hell. But in Iraq life is hell, and there are hundreds of tales to trump Mirsky's — see Ann Clwyd on those dispatched feet-first into the human shredder. etc. With Saddam's prison state, to choose war is to choose potential temporary hell over certain ongoing hell. I happen to believe that's the moral position. But Mirsky's `chickenhawk' sneer is surely sauce for the dove, too. He thinks I'm in favour of war only because I don't have to live with the consequences of my warmongering, as ordinary Iraqis do; but he's only opposed to war because he doesn't have to live with the consequences of his moral posturing, as ordinary Iraqis do. (Just for the record, I would have been happy to go to Iraq, but they didn't ask. I'm not much in demand these days.) But the problem for Mirslcy and the other NIONists is that the cost-benefit analysis keeps moving in favour of us warmongers: while your average long-running dictatorship runs at a fairly constant level of hellishness, the hellishness of war is being continuously diminished by Pentagon R&D. The Mirsky argument — that leaving Saddam to feed folks into his shredder for another couple of decades is preferable to the horrors of war — looks pretty threadbare after a week in which the biggest alleged American atrocity has been the death of five Syrian 'civilians'. There are no 'hundreds of thousands' dead, for the obvious reason that the mightiest people-killing machine on the planet is going to an awful lot of trouble to avoid killing people. You can resist this statement of the obvious if you wish. Cyber-entrepreneur John Perry Barlow did. emailing his chums from the International Rainbow Gathering in Brazil: 'I know that the only truly powerful country on the planet is continuing to manufacture the perilous, consciencestunting myth that technology can make war relatively safe. Indeed, we are so delusional on this subject that we believe that bombing the shit out of the Iraqis is a humanitarian act.'

Who's the delusional one here? Technology is making war safe — relatively. If you're an ordinary Iraqi who happens to have the misfortune to live next door to a prime target like Tariq Aziz's office, you're relatively safer now than you would have been even at the time of the Kosovo campaign, and a lot safer than you would have been back in 1983, or '63, or '43. The NIONists made fools of themselves over Afghanistan because they couldn't get beyond Vietnam. They keep applying 1967 arguments to 2003 technology.

'War Is Never The Answer. chant the Mirskys of the world. But it depends on the question. It's probably never the answer for Belgium, the improbable instigator of the new Blair-excluding EU defence initiative. The Belgian army has no high-tech gadgetry and spends its budget on the salaries of its elderly old soldiers hanging in there for their pensions. War is also unlikely to be the answer in, say, a showdown between Britain and Spain over Gibraltar. The Spaniards have a popular king and a legitimate representative government: the people would rise to the defence of their homeland. But high-tech super-precision war is a rather good answer for dealing with a dictatorship: I'll bet everyone from Kim Jong II to Robert Mugabe is hoping that Saddam shows up living and breathing; the alternative — that Washington can take out the entire leadership with the first bomb of the campaign, that the front line is the new head office — is too horrible for them to contemplate. But even if they didn't get the big guy straight out the gate, the Pentagon is on its way to eliminating the middle man — the dictator's subjects — from the equation of war. Or, to put it in Mr Barlovv's terms, they're bombing 'the shit' — Saddam and co. — out of the Iraqis and leaving everything else intact.