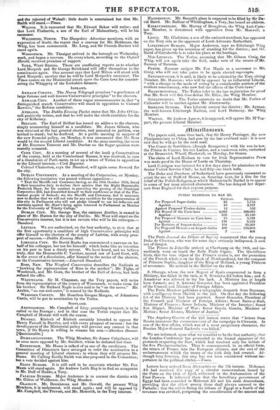 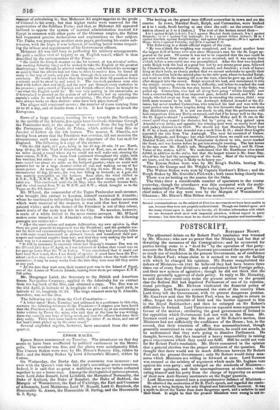 The papers said, some time back, that Sir Henry Pottinger, the new Plenipotentiary to China, had gone by the last overland mail : it is now said that he will go by the next mail.

The Count de Survilliers, (Joseph Bonaparte,) with his son-in-law, the Prince de Canino, his son Lucien, and a numerous suite, embarked at the Brunswick Wharf, Blackwall, on Monday, for Genoa.

The claim of Lord Hotham to vote for Irish Representative Peen; was made good in the House of Lords on Thursday.

Lord Cardigan was balloted for a few days since for admission to the Senior United Service Club; he had fifty-one black balls.

The Duke and Dutchess of Sutherland have generously consented to grant the use of Stafford House, on Saturday next, for a fête for the relief of the Polish Refugees, at which Mademoiselle Rachel is to appear in some of her most admired characters. She has delayed her depar- ture from England for that express purpose.

PUBLIC PETITIONS TO MAY 20.

For Repeal of the Corn-laws

The Prince de Joinville arrived at Cherbourg on the 19th, and im- mediately went on board the Belle Poole frigate. The Quotidienne hints, that the true object of the Prince's cruise is, not the protection of the French whalers on the Bank of Newfoundland, but the conquest of Princess Sophia, daughter of the King of Holland, a young Princess of seventeen. He arrived in the Helder on the 21st.

S. Olozaga, whom the new Regent of Spain empowered to form a Ministry, has failed in the task, as S. Gonzales did before him ; and S. Amodovar was allowed to try his luck. A Ministry has at length been formed ; and S. Antonio Gonzales has been appointed President of the Council and Minister of Foreign Affairs.

The Paris Mon iteur publishes a telegraphic despatch from Bayonne, with intelligence from Madrid to the 22d. On that day the following list of the Ministry had been gazetted. Senor Gonzales, President of the Council and Minister of Foreign Affairs ; Senor Sarra-y-Rull, Minister of Finance ; Senor Infante, Minister of the Interior ; Senor San Miguel, Minister of War ; Senor Garcia Gamba, Minister of Marine ; Senor Alonzo, Minister of Justice."

The Augsburg Gazette of the 22d instant states that "letters from Russia announce the commencement of the campaign in Cireassia. In one of the first affairs, which was of a most sanguinary character, the Russian Major-General Backvrin was killed."

We are informed, upon what we consider to be the best authority, that the London Conference has proceeded to the formal signature of the protocols respecting the East, which had received only the initials of the five Plenipotentiaries. Thus is consummated, in an official form, the return of France into the European alliance, and the end of the embarrassment Iwhich the treaty of the 15th July had created. Al- though long foreseen, this step has not been considered without im- portance in the political circles.—Times.

Letters have arrived from Alexandria to the 7th instant. Mehemet All bad received the copy of a. circular memorandum issued by the Porte on the 19th of April, addressed to the Ambassadors of the Four Powers. It informed them that the hereditary government of Egypt had been conceded to Mehemet All and his male descendants, providing that the eldest among them shall always succeed to the Pashalic ; that the article fixing the tribute of Egypt at a fourth of the revenues was revoked, postponing the consideration of the amount and Dinner of calculating it ; that Mehemet All mighoappoint to the grade of Colonel in his army, but that higher ranks were reserved for the approbation of the Sublime Porte ; and that, as Mehemet All appeared Inclined to oppose the system of internal administration decreed for Egypt in common with other parts of the Ottoman empire, the Sultan had requested precise declarations and explanations on that subject. The Pasha was preparing another state paper, professing his entire sub- mission, with the hope, it was believed, of making better terms respect- ing the tribute and appointment of his Government officers. Mehemet Ali was still busy in perfecting his military arrangements. He paid a sudden visit of inquiry to an English vessel, which is thus described by the correspondent of the Tunes— tie visited the Gorgon steadier on the 1st instant, at ten minutes' notice, (on washing Saturday too,) as if he wished to take the English at the greatest disadvantage; but though be selected washing-day, and followed his messenger so quickly that the officers had not time to dress to receive him, he found all ready in the way of work, and put them through their exercise without much ceremony. He would not believe that they could fire their 32-pounders thrice a minute, until he stood by and noted it. The ten-inch paixhaus were also fired with hollow shot and shell, and the crew put through every evolution in his presence; and a crowd of Turkish and French officers whom he brought to see what the English could do.' He was very sparing in his encomiums, as if determined to proceed on the system of nil caldron; but on entering the -captain's cabin he could not forbear exclaiming, 4 Ha, these English captains have always books on their shelves : mine have only pipes instead.'" The plague still continued severe ; the number of cases varying from 10 to 26 a day, and of deaths from 5 to 15. It had .begun to attack the Europeans.

News of a large steamer, wending its way towards the North-east, in the middle of the Atlantic, has again been received; this time through

the Peninsular mail, in the shape of an extract from the log-book of the Portuguese ship Conde de Palma, which arrived from Rio de Janeiro at Lisbon on the 6th instant. The master, S. Almeida, not having been aware that the President was overdue, did not mention the circumstance until some days after the departure of the last mail for England. The following is a copy of the extract-

same vessel was about six miles on the larboard quarter; when we could well

Mr. M`Leod, the commander of the Tagus Peninsular mail-steamer, who brought this extract to London, himself examined S. Almeida ; whom he cautioned to tell nothing but the truth. In the earlier accounts which were received of the steamer, it was said that her funnel was painted white ; and as the funnel of the President is not of that colour,

much doubt of the story was felt in the City. No mention, however, is made of a white funnel in the more recent account. Mr. M`Leod makes. some remarks on S. Almeida's story, from which the following. passages are extracted- " After the most serious and mature deliberation, my own opinion is,-that there are good grounds to suppose it was the President ; and the probable rea- son for their not communicating may have been that they had previously fallen in with some vessel homeward or outward bound, and transferred their pas- sengers and received supplies from her ; and that they were making the best of their way to the nearest port in the Western Islands. * * * "It will be necessary to ascertain where her Majesty's steamer Dee was on the 236 and 24th days of April, as I was iuformed at Lisbon that vessel was on her passage home from the -West Indies. When ascertained that it could not have been that vessel, then l am firmly of opinion it must have been the Pre- sident; and as they were then in the parallel of latitude where the trade-winds commence, it may be many weeks from the date they were seen till they arrive at any port. "At the date they were seen, their nearest port was in the Island of Fayal, one of the Azores or Western Islands, bearing from them per compass E.N E. 708 miles.

Mr. Macgregor Laird, the Secretary to the British and American Steam Navigation Company, applied to the Admiralty for an extract

The following tale is from the Cork Constitution— "A letter dated Bath, Tuesday,' and addressed to a gentleman in this city, contains the following reference to the President-4I suppose you have heard that the President is lost. A sealed bottle was picked up at sea containing a letter written by Power the actor, who said that at the time he was writing, there was scarcely any hope of bein,g saved, and that the officers had done their duty nobly. There were some buckets with the letter P. on them, and one of her boat's stern picked up by the same vessel."

Several exploded reports, however, have emanated from the same quarter.