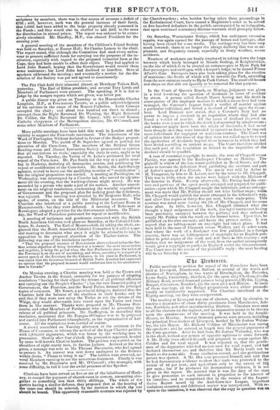 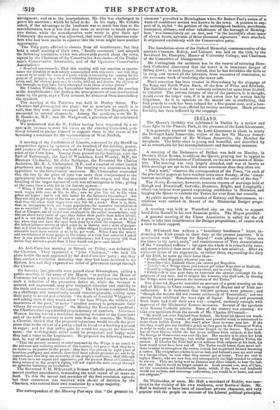 Public meetings to petition for repeal of the Corn-laws have been held at Liverpool, Manchester, Salford, in several of the wards and districts of Nottingham, in two wards of Birmingham, the Potteries, Lyme Regis, Canterbury, Dartford, (in the open air,) Chatham. (in the Military Road, several thousand persons being present.) Hythe, Epping, Bangor, Carnarvon, Romford, (in the open air,) and Bilston. At most of these meetings, all the Budget propositions were either premedi- tatedly or incidentally supported. The Chartists interfered at the Epping meeting, hut they were overpowered.

The meeting at Liverpool was one of electors, called by circular, to receive a deputation of about thirty gentlemen from Manchester, Ash- ton, Rochdale, and other manufacturing districts. Circulars were sent to all the electors on the register, and no imputation seems to be thrown upon the genuineness of the meeting. It was held in the Amphi- theatre, on Monday. Several thousand persons were present, including the principal Free-traders of Liverpool, headed by Sir Joshua Wakes- ley, the late Mayor. Mr. Richard Cobden of Manchester was among the speakers ; and be entered at length into the general arguments of the Corn question. After he had done, Sir Joshua Walmsley, who was in the chair, invited any person of opposite opinions to come forward. A Mr. Hardy then offered himself, and proposed to argue against Mr. Cobden and for total repeal It was objected to, that the gentle- men of the deputation who had spoken were for total repeal, and had declared themselves so ; and therefore that Mr. Hardy could not be heard on the same side. Some confusion ensued, and one pertinacious person was ejected. A Mr. Dix next presented himself, and said that he had documentary evidence to show that trade was protected to the extent of 42 per cent., and agriculture only to the extent of 22i per cent.; but if he produced his documentary evidence, it is not given in the report. He averred that it was the duty of the state to give protection to each interest in proportion to the amount of its taxation ; and he complained that in the version of the Import- duties Report issued by the Anti-Corn-law League, important omissions occurred, and fabricated matter was interpolated. With re- spect to the omissions, it was observed that the copy in question was as

abridgment; and as to the interpolations, Mr. Dix was challenged to prove his assertion ; which he failed to do. In his reply, Mr. Cobden asked, if the advantage to the landlords was so much less than to the manufacturers, how it was that they were so anxious to retain protec- tive duties, while the manufacturers were ready to give them up? Ultimately the meeting was adjourned, that some of the immense num- bers who had been unable to squeeze into the room might have another opportunity.

The Tory party affected to abstain from all interference ; but they held a small meeting of their own, "hastily convened," and adopted the following resolution, which was afterwards posted about the town, signed by the Chairman of the Conservative Association, of the Trades- man's Conservative Association, and of the Operative Conservative Association- " Resolved unanimously, That this meeting will not sanction or counte- nance the dictation of men totally unconnected with this town ; nor will they consent to be made the tools of a party which is traversing the country for the purpose of propping up a weak and tottering Administration at this peculiar crisis, and, for obvious purposes, to excite, mislead, and deceive the electors of this borough, as they have lately attempted to do those of other places." Mr. Charles Wilkins, the Lancashire barrister, attended the meeting at the Amphitheatre ; but finding the arrangements of nom intervention made by his party, says a Tory account, he abstained from demolishing the speakers.

The meeting at the Potteries was held in Hanley Street. The Chartists had preoccupied the place ; but in numbers so small, it is said, that they were quite swamped by the Corn-law Repealers, who amounted to several thousands. Among the speakers, were Mr. R. E. Heathcote, M.P., and Mr. Wedgwood, a grandson of the celebrated Wedgwoc d.

We understand that Sir W. Folkes having been requested by a re- speclable yeoman to state his views on the existing Corn-laws, posi- tively refused to pledge himself to support them in the event of his becoming a candidate for the representation of West Norfolk.

A meeting of the freeholders of Lincoln, convened by the Sheriff on a requisition signed by upwards of six hundred of the nobility, gentry, and yeomen of the county, was held on Friday last, to oppose the alter- ation of the Corn-laws. Among those present on the hustings, were the Earl of Yarborough, the Earl of Winchilsea, Lord Worsley, M.P., Sir Montagu Chohneley, Sir John Nelthorpe, the Reverend Sir Charles Anderson, Mr. R. A. Christopher, M.P., and a number of other landed proprietors and large occupiers. The meeting was unanimous in the opposition to the Government measures. Mr. Christopher contended that the rise in the price of corn was more than compensated to the agricultural labourer by the enhancement of his wages, and that the handling of the larger amount of cash was advantageous to him ; giving at the same time a side hit at the factory system- " When I first came into this county the practice was to give 10s. 6d. a week wages, with corn at 36s. to 42s.; now we give 13s. 6d. to 15s. when prices are higher : but is not this better for the labourers themselves ? ATC they not able to get more of the tea or coffee, and the mi'me to sweeten them, than they did when their wages were only 10s. 6d. a week? How is it, then, that, in comparison with our happy population, the operative manufacturers are so wretched ? It is in consequence of their factory system. It is a fact that at Glasgow, out of 13,000 now employed in the cotton-manufacture, only 600 are above forty years of age: they derive their profits from infant labour; and it is not likely that they will give to a grown-up person 2s. or 28. 6d. a day when they can have the same work done by a child for sixpence. When the infant labourer arrives at adult years he is thrown into a state of pauper- ism, and what becomes of him ? He is either obliged to starve or to become a miserable hand-loom weaver at -Is. to 6s. per week. When I saw the misery and wretchedness of these people in the course of a visit last summer, I asked low it was possible to live in' such wretchedness ; but I was coolly told, that unless they derived a profit from it they would not go to such labour."

An Anti-Corn-law meeting at Stroud, on Friday, was defeated by the Chartists. They appointed a " joint Chairman," who took his place beside the man appointed by the Anti-Corn-law party ; and they then carried a resolution declaring that they had been deceived in the Reform Act, and they expected no relief of grievances except through the Charter.

On Saturday last, placards were posted about Birmingham, calling a public meeting, in the name of the Mayor, "to petition the House of Commons for such a revision of the Corn-laws and Customs-laws and such a reduction of the protective duties as, while the revenue is secured and augmented. may give increased stimulus and stability to the trade and commerce of the country." The Chartists considered this as a challenge, and immediately issued counter-placards, calling upon their party to attend and celebrate "the death of deceitful Whiggery"; and asking them if they would allow "the base Whigs, the robbers and murderers of the poor,' to make "another attempt to perpetuate their villany for seven years longer." On Monday the Town-hall was filled ; the Chartists show log a decided preponderancy of numbers. Alderman Weston having moved a resolution declaring revision of the Corn-laws and of the tariff necessary to avert ruin from the country, Mr. White, a Chartist, denied that the proposed reductions would benefit the poor more than to the extent of a penny a loaf in bread or a farthing a pound in sugar ; and for that paltry gain be would not support the Govern- ment: the working-men never could be prosperous and happy until they had a voice in the Legislature. He proposed the following resolu- tion, by way of amendment— "That the present measure of relief proposed by the Whigs is an insult to the toilworn and suffering millions of this country, and proves that they have no desire to do justice to the people : they have also proved, by eight years of heartless profligacy and misrule, that their most solemn promises are not to be regarded, and that they are unworthy of the people's confidence; that although the Corn-laws are unjust and oppressive, yet the present House of Commons, being inimical to the people's rights, will not repeal the same except through an agitation bordering on revolution."

The Reverend T. M. M'ainnell, a Roman Catholic priest, afterwards moved another amendment, demanding the total repeal of all taxes on food. To this the mover and seconder of the first resolution agreed ; but their concession 'was received with shouts of derision by the Chartists, who carried their own resolution by a large majority.

The correspondent of the Morning Post says that "the greatest ex

citement " prevailed in Birmingham when Sir Robert Peel's notice of a. want-of-confidence motion was known in the town. A petition in sup- port of it, styled "the petition of the undersigned bankers, merchants, tradesmen, artisans, and other inhabitants of the borough of Birming- ham," was immediately set on foot, and "in the incredibly short space of eleven hours, upwards of three thousand signatures" were attached. It originated exclusively with the Conservative party.

The foundation-stone of the Oxford Memorial commemorative of the martyrs Cranmer, Ridley, and Latimer, was laid on the 19th, by the Reverend Dr. Plumptre, Master of University College, and Chairman of the Committee of Management.

Mr. Cottingham the architect has in the course of restoring Here- ford Cathedral discovered that the tower is in imminent danger of falling down ; in such danger, indeed, that he has forbidden the bells to be rung, and turned all the labourers from measures of restoration, to the necessary work of rendering the tower safe.

Much sensation has been created in Shrewsbury by the stoppage of the Salop and North Wales Bank, of the firm of Price and Edwards. The liabilities of the bank are variously estimated at sums from 35,0001. to 150,000/. The private fortune of one of the partners, it is thought, would cover the larger sum, if it is not eaten into by certain family litigations. As it is, opinions on the matter are so conflicting, that four pounds in cash has been refused for a five-pound note, and a hun- dred-pound note has been offered for twenty sovereigns. Much private hardship has been inflicted by the stoppage.