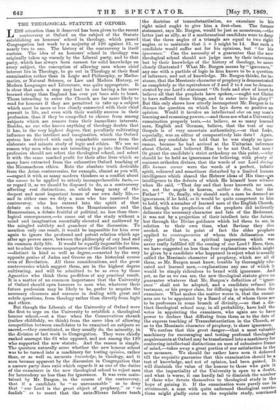 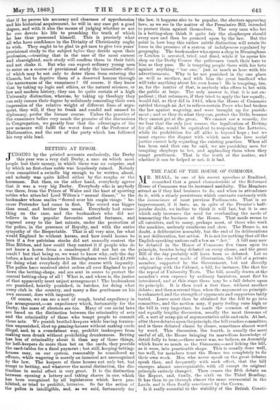 THE THEOLOGICAL STATUTE AT OXFORD.

LESS attention than it deserved has been given to the recent controversy at Oxford on the subject of the Statute establishing an honours' school in theology, which passed Congregation last week by a majority of 120 against 61, or nearly two to one. The history of the controversy is itself curious. The idea of an honours' school in theology was originally taken up warmly by the Liberal party, and to that party, which has always been earnest for solid knowledge on every subject, the conception of allowing men whose chief interest lies in Theology, to go out in Theology at their final examination rather than in Logic and Philosophy, or Mathematics, or Natural Science, or Law and Modern History, or Modern Languages and Literature, was quite appropriate. It is clear that such a step may lead to our having a far more learned clergy than England has ever yet been able to boast. Those intending to enter the Church are far more likely to read for honours if they are permitted to take up a subject which must be more or less closely connected with their chief pursuit in life, and even with their worldly success in their profession, than if they be compelled to choose from among subjects which are remote from their immediate interests. Besides, no one who knows anything of theology doubts that it has, in the very highest degree, that peculiarly cultivating influence on the intellect and imagination, which the Oxford system has derived with such remarkable success from the elaborate and minute study of logic and ethics. We see no reason why men who are not intending to go into the Clerical profession should not select the theological school, and select it with the same marked profit for their after lives which so many have extracted from the exhaustive Oxford teaching of the Nicomachean ethics. Rate the absolute truth derivable from the Arian controversies, for example, almost as you will, —regard it with so many modern thinkers as a conflict about the names to be applied to utterly incomprehensible facts,— or regard it, as we should be disposed to do, as a controversy affecting real distinctions, on which hang many of the deepest and most important issues of our own daily life,— and in either case we defy a man who has mastered the controversy, who has entered into the spirit of that debate on an iota, between the Homoiousians and the Homoousians, a debate fruitful of political, no less than theological consequences,—to come out of the study without a mind and imagination essentially elevated and mellowed by the mingled subtlety and grandeur of the discussion. To mention only one result, it would be impossible for him ever again to ignore the profound and potent relation which age after age proves anew, between the philosophy of any land and its common daily life. It would be equally impossible for him not to admit the enormous importance of the distinct influences, —distinct in kind as well as degree,—exerted by the very opposite genius of Judea and Greece on the historical course even of Revelation. All these considerations, and the great controversies which suggest them, are in the highest degree cultivating, and will be admitted to be so even by those Agnostics who think them profitless of any practical result. It is a matter of no common importance that the University of Oxford should open honours to men who, whatever their future profession may be likely to be, prefer to acquire the necessary clearness and sureness in dealing with great and subtle questions, from theology rather than directly from logic and ethics.