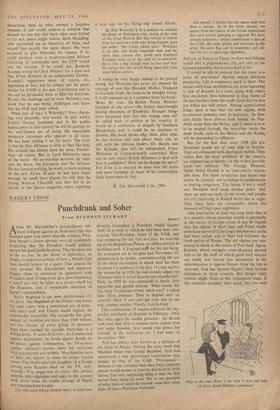 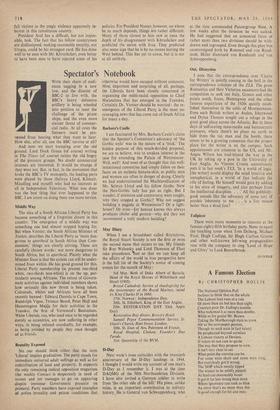 of Commons as member for Derby; It is characteristic of our hero that he worked closely with the Liberal in this two-member constituency, although he had fought strongly against the Lib- Lab propensities of Richard Bell, his predecessor both as MP and General Secretary. In the House of Commons Thomas soon showed himself an agile parliamentarian and was until his last years seldom unsuccessful in debate. I had not hitherto realised how prominent he was during the First World War, especially in the Lloyd George intrigue, nor that he was seriously considered for membership of the War Cabinet. The book tells the story of the industrial unrest of the post-war years, of the ill-fated triple alliance and of Black Friday, for which Thomas received much undeserved obloquy. Thomas never got the complete confidence of the rank and file in the Parliamentary Labour, Party and Was never seriously considered as a possible leader or Prime Minister. This was partly due to his increasing friendship with the other side, political and industrial, and to his personal habits: The Labour Party, while not taking a narrow view of personal relations, desires a certain austerity in its leaders, and as the years went on, Jimmy became more and more associated in his way of life with the wealthy, though he d not, like MacDonald, cease to be hail-fellow-well-met

*1. H. THOMAS: A LIFE FOR UNITY. By Gregory Blaxland. (Muller, 36s.) Witlit, this article as a poet. Of course 1 -am I well aware that today poets are considered very unimportant members of society. Nobody would notice or complain were we to drain to the US. It is a long time since Shelley claimed that we were 'the unacknowledged legislators of mankind.' In the technocracy to which both parties now scramble to subscribe, the poet or artist has long been delegated to the role of beggar, clown or eccentric. Yet Shelley's state- ment is still fundamentally true. Political parties may get support for ideas; but those ideas have always been articulated first by poets. Every principle the Fabians had was first stated in the prose notes to Queen Mal? a century earlier. Writers can still produce the creative germ, the intellectual yeast. The party which ignores them does so at its ultimate peril. The poet's ideals of today make the political parties' ideas of tomorrow. The night between generally lasts a generation. In this context my own experiences may not be irrelevant. I find that when I go to any of the universities to lecture, or when 1 meet any other writers or artists, it is always assumed by them that I must be a socialist because I am known as a so-called intellectual.

What lies behind this assumption? And does it matter? As I have said, history can show that every political party has emerged as a sort of Frankenstein on a writer's desk : Socialism on Shelley's and Rousseau's; National Socialism on Nietzsche's; and, probably, Harold Wilson's dogma or doggerel can be traced back to Wells, Shaw or Mrs. Wobb's lap. But whatever the party, it has ultimately disappeared once it last for each other, indulging in mutual flattery. Thus when the breach came in 1931 Thomas was the only person of any note except Snowden to 'go with his chief. The author takes an extreme MacDonaldite view of the issue.

Thomas continued at the Dominions Office, where he was not a success: in particular in his dealing with Ireland. I recall a stinging but well merited rebuke from the late Lord Brabazon. Just as MacDonald in the next five years lost all grip and became a mere unwelcome passenger in the Tory ship so did Thomas, while his character steadily deteriorated. High living, gambling and too much alcohol marked his decline.

It culminated in the Budget scandal which led to an inquiry under Mr. Justice Porter which caused Jimmy's resignation. No one supposed that he wilfully gave away Budget secrets, but neither he nor anyone, else could say what he might have let slip in the very dubious company he kept. There was much sympathy with him in this tragic end to a career of distinction, but he passed from public life and almost from the public mind during the Second World War. He ardently desired employment in the hour of the nation's need, but nothing could be found for him.

Thomas is the subject of many good stories, some of which are given in this book though not always in the form in which I know them.

Mr. Blaxland has written an entertaining book, but it is uncritical and shows a certain un- familiarity with the Labour movement as evinced by a few inaccuracies. For instance C. T. Cramp's name was not Charles but Concannon, Charlie being only a nickname.

the support of the intellectuals who originally created it. Where does the Tory Party stand in this?

If you were to make a list of contemporary writers and artists who are known as supporters, even passive, of the Tory.Party, it would be brief. I think that lack is important. It could prove lethal.

As things are, both the Tory and Labour. Parties have an identical policy: they believe progress lies 'in the pursuit of materialism; they

The whole situation of the individual in society has to be reshaped and redefined. Such a metamorphosis cannot be achieved by the time of the next election. But it would be possible now to take a step which would sway a large part of the 'intellectual' vote and overcome, in those influential quarters which I have men- tioned. their prejudices and bias against the Tory Party

may have conquered the poverty of the belly, but poverty of the mind is more acute now than it was in the eighteenth century. The recent episodes at Clacton and Margate showed this famine within our culture. Increased leisure from science and automation, increased appetite from mass 'education' will lead to an infinite number of Clacton demonstrations of frustration unless that vacuum is filled by art. Not the art which is a mere diversion, but that which turns material existence into the consciousness of being.