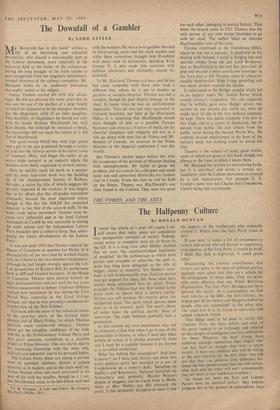 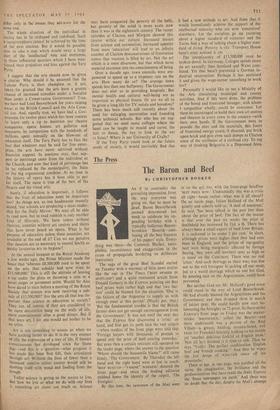 A new Council, such as Mr, Longbottom advo- cates. could

do a great deal to bring some order, at least so far as the United Kingdom is concerned, into this increasingly kaleidoscopic pattern. It would not in any way interfere with the educational and fund-raising activities of individual voluntary organi- sations. Whilst its main constituents would be the non-governmental voluntary organisations, it would also maintain contact with the interests represented by other existing bodies---Government Departments; the Overseas Development Institute with its indus- trial and academic supporters; the Lockwood Com- mittee in its work of providing young volunteers for overseas service; the UK committees of various United Nations bodies, etc. Where specialised fields of activity exist a new Council would in no way interfere with their special responsibilities. It could, however, perform a very valuable service in keeping all such efforts in touch with each other and achieving a greater harmony of understanding in the public mind.

A new Council would probably cease to be itself a fund-raising body. Its relations to local Freedom

Mr. Longbottom states that the voluntary organisations have a vital part to play. Agreed. The pilot project must precede large-scale planning, as the groundnuts scheme of a former Labour Govern- ment so disastrously proved. The voluntary organisa- tion can stimulate imagination and 'personalise' giving. But only government or international action can provide the dams, land reclamation, forest conservation, docks, highways, housing and

hospitals which the 'other world' demands, and give to this other world the control of prices on which its welfare depends. Unless we, the voluntary organisations, can stimulate the imagination of governments we have failed indeed. In the meantime a great opportunity for world leadership remains ignored.

Sut,—Christopher Hollis asks a very pertinent question, 'What constitutes a contraceptive'?' Any- thing which makes it possible for a baby not to be born' would be a reasonable answer. Even the pill which is being developed, which' makes the time of ovulation predictable (and which stands a good chance of being accepted even by the English hierarchy), would come under this category. Ergo, a contraceptive is not wrong. It is the intention that is important. Is it being used for a sufficient reason? The Church moves slowly. Scarcely ten years ago words such as birth control and family planning were anathema to episcopal ears. These words can now be used without blushing or feeling sinful. 'Contraceptive,' too, it' it means a device, for con- trolling birth, will become equally acceptable. There will doubtless remain those contraceptives which are disapproved of, because they interfere with, the integrity of the sexual act, and those contraceptives IT would be very easy to be persuaded by the setting of Mr. Koestler's latest return to the sciences into quite mistaken expectations of its purpose. A title with theological overtones* appears upon an attractive dust cover which leaves one in some doubt about whether its in- spiration came from events to be measured on the astronomical or the atomic scales. Only a treatise on cosmology could satisfy the promises of both, but a foreword by Sir Cyril Burt explains that we are to receive a major original contribution to psychology placed in the wider contexts of human evolution and embryonic development. The imposing weight of the fifty- four chapters and two appendices which follow could well betray a determination to pursue this subject-matter far beyond the limits of a lay- man's understanding.

In the event these expectations, or forebodings, are falsified because Koestler, as so often before, writes easily, amusingly and with a disarming modesty of style about problems which are either immediately comprehensible by reference to common experience, or are made to seem so in his exposition. A great many people are sure to get a great deal of pleasure from what he has to say, and to be stimulated by it. But despite a suggestion in the foreword, I doubt if they will be stimulated to undertake anything so pre- cisely conceived as a critical experiment in psychology, nor does Koestler himself provide a programme for future work in any of the fields he discusses. It really isn't that sort of book, and if a horrid coinage may be forgiven I would suggest that The Act of Creation might be sub- titled 'discursions in branches of biology and psychology which have interested me and should interest you,' a discursion being rather like an excursion but embarked upon without the same confidence in a punctual return to base.

Mr. Koestler himself is mercifully exempt from proneness to coinage--perhaps because several European languages are at his command and are used freely to eke out the inadequacies of English. One term of his own invention is, however, made to work hard, since it is helpful in discussions of a major theme, and indeed in a sense epitomises it. This is bisociation, which describes the process by which the normally in- congruous are temporarily made congruent; in which modes of thought with independent histories, justifications or other claims upon our attention, fuse unexpectedly in the crucible of our minds to create conceptual novelty. Bisocia- tion is introduced to us early as part of an ex- planation of humour, but it recurs at intervals always at the heart of mental processes at the moment of creation.

Bisociation itself provides a model that is applied, if a little hesitantly, to acts of creation belonging to regions of natural history far re-

moved from mental activity. For example, young embryos before the development of their brains are quite certainly innocent of thought. Yet on their own level they are creatively very active indeed, and unlike the artistic or scientific in- novator their creative activities are repeated generation after generation and hence are open to prospectively devised experimental analysis, not only to retrospective survey. Koestler sug- gests that there are common elements in the creative acts occurring at different levels, and that the confronting of incongruous modes of behaviour is important to both.

By D. R. NEWTH in any way critical to the development of Koestler's arguments, and of these I only feel competent to judge the more strictly biological. They occur in what I sense to be the least con- fident parts of his book, but I think he has played fairly with the biological material and not moulded it to his theses.

This is not to say that he cannot irritate with a rather cavalier handling of problems which are important, open, and difficult. For example the susceptibility of certain tissues to tumour forma- tion is related, via the proliferative capacity of their constituent cells, to regenerative behaviour and the consequences of trauma. The view put forward is not without force, but equally it should face a number of criticisms. To justify it by two paragraphs of sympathetic quotation is to accept the criteria of scholarship, not of science. Indeed. though many of Koestler's authorities are well chosen and are entitled to the confidence which he places in them, few of them would resent a less respectful treatment.