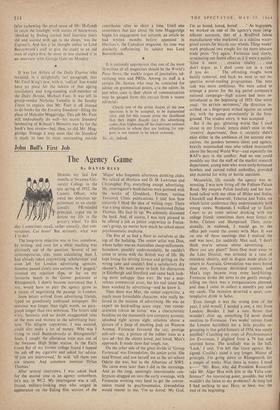 None of this is. much consolation to the house- wife

who has to pay more for her weekly shop- ping, and if the rise in prices had caused genuine hardship to the British consumer, the Govern- ment would have been duty bound to stop the flow of meat out of the country.

On this issue, hoeever, it is important' to bear a number of points in mind. In the first, place genuine hardship has not been caused. There is plenty of other meat available at more modest prices. Secondly, the importance of the foreign butchers in the present situation has been greatly exaggerated. When the Birmingham butchers claimed that a Frenchman had cornered a quar- ter of the market it later emerged that he had Purchased only 2{ per cent of the available sup- plies. In fact, only a very small proportion of the amount of beef available is going overseas, prob- ably less than 5 per cent.

Thirdly, and most importantly, government action to stop exports would do little good. It is not the foreign butchers who are responsible for the rise in prices. They have merely given a slight extra twist to a top which would have spun along quite merrily without it.

The cause of all the trouble is a world short- age of beef resulting mainly from last year's drought in Argentina. With demand continuing to rise none the less, the market is in the process of adapting itself to the changed conditions, and

NICHOLAS DAVENPORT is on holiday

But by that time the effect of the latest in- creases on wages will start to take effect. About two million workers have wages connected more or less directly with the cost of living index, while, with unemployment high, local unofficial rises will also be taking place. Last winter in- dustry had to absorb a fairly big round of wage increases, so that another upward move in indus- trial prices will not be easy to avoid.

When the Budget was presented the Govern- ment was able to congratulate itself on two good sets of trade figures in a row. But it has failed to score a hat-trick, During April imports remained more or less unchanged at £457 mil- lion, while exports fell £36 million to £337 mil- lion. After taking re-exports into account the trade gap works out at £107 million after sea- sonal adjustments, which is a goad deal nearer January's £120 million than March's £65 million.

After the February and March figures had appeared, January was quickly dismissed as a statistical freak. The important question now is how the latest figures will look when the next batch have appeared. It is unlikely that they will be as bad. But some of the portents are none too hopeful. The Association of British Chambers of Commerce has reported that merchants are less hopeful about their export prospects than they were four months ago, and there is a. grow- ing feeling that the moves towards a common ex- ternal tariff among the Six are beginning really to hurt outsiders.

Against this a number of other factors such as the early Easter can be set, and it should not be forgotten that exports in the first four months have been at a higher average level than they were in the last quarter of last year. But follow- ing the rising level of imports over the last few months they will have to do better than this be- tween now and the election if Mr. Maudling is not to be short of ammunition.

and it covers the children as well !

helps you to ensure that the finest specialist medical treatment is always immediately available in times of illness or accident involving you or your family— you can select the Nursing Home, Con- sultant and Surgeon of your own choice without having to worry about the cost, and, when it is not a matter of desperate urgency, treatment can be arranged to fit in conveniently with your business commitments.

The W.P.A., a mutual non-profit-making organisation, operates throughout Great Britain, Northern Ireland and the Channel Islands and Subscribers and their Dependants are also covered while they are temporarily abroad on business or pleasure.

The W.P.A. offers substantial discounts to groups of six or more subscribers.

rilinsiosummion NMI Mg For full particulars of how the W P.A. can help 111 you and your family, post this coupon to: The Western Provident Association for Hospital and Nursing Home Services Royal London Buildings, Baldwin Street

Bristol, 1 Please send me full particulars of Schemes. l am under 65 years of age.