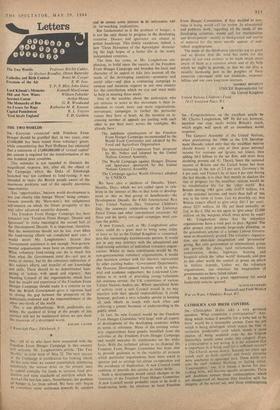 Page 15, 29 May 1964 — The extraordinary reversal of this comes only when someone has
Close

The extraordinary reversal of this comes only when someone has

managed to break into their territory. He or she then automatically becomes a fully paid-up member of the conspiraiy. By getting the title to any job you are immediately held to have all the knowledge and experience to go with it. My first job as a journalist was on a magazine where within a matter of days I found myself appointed travel editOr. Not even the fact that the very week of my appointment I advised someone that the most direct route to Bristol from London was via Oxford, nor that in the first issue under my control I described Israel as being in Africa, could deter my col- leagues. Surrounded by some of the most ex- perienced season ticket holders in the jet set, 1 was constantly being consulted about cruising places. At ohe of my first editorial conferences I was asked about winter travel and, saved by a calendar picture over the editor's desk, blurted out, 'Spas.' We were soon up to our ears in spa living, and modest mid-European spas which usually closed in the winter were amazed, or so we hoped, by requests for accommodation.

It is a pattern which repeats itself even when machines like tape-recorders are involved. Once you have a job you find that the very people who were impressing all the difficulties of tech- nique on you prior to your appointment immedi- ately take it for granted that you have all the technical skill you need.

How very different this is from unskilled