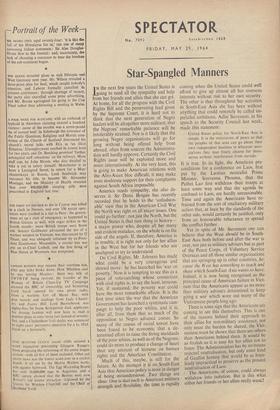 N the next few years the United States is 'going to need all the sympathy and help from her friends and allies that she can get. At home, for all the progress with the Civil Rights Bill and the persevering lead given by the Supreme Court, it is hard not to think that the next generation of Negro leaders will be altogether more militant, that the Negroes' remarkable patience will be intolerably strained. Nor is it likely that the growing Negro organisations will go for long without being offered help from abroad, often from sources the Administra- tion will hardly approve. Certainly the Civil Rights issue will be exploited more and more internationally. At the very least, this is going to make American relations with the Afro-Asian bloc difficult; it may make even moderate support for their complaints against South Africa impossible.

America needs sympathy; she . also de- serves it. Sir Denis Brogan has recently recorded that he holds to the 'unfashion- able' view that in the American Civil War the North was right on all major issues. One could go further : not just the North, but the United States is that rare thing in history— a major power who, despite all her many and evident mistakes, on the whole is on the side of the angels. If, therefore, America is in trouble, it is right not only for her allies in the West but for her friends who are unaligned to try to understand.

On Civil Rights, Mr. Johnson has made what could be a very courageous and shrewd move : he has launched his 'war on poverty.' Now it is tempting to see this as a piece of vote-catching whose connection with civil rights is, to say the least, tenuous. Yet, if sustained, the poverty war could have the most remarkable effects. It is the first time since the war that the American Government has launched a systematic cam- paign to help the poor whites, and it is, after all, from them that so much of the opposition to Negro advance comes. So many of the causes of racial unrest have been found to be economic that a de- termined effort to raise the living standards of the poor whites, as well as of the Negroes, could do more to produce a change of heart than any amount of lectures on human rights and the American Constitution. Much of this, maybe, is still for the future. At the moment it is on South-East Asia that.American policy is most in danger of being - misunderstood. Two things are clear. One is that such is American military strength and flexibility, the time is rapidly coming when the United States could well afford to give up almost all her overseas interests 'without risk to her own security. The other is that throughout her activities in South-East Asia she has been without anything that could remotely be called im- perialist ambitions. Adlai Stevenson, in his speech to the Security Council last week, made this statement: United States policy for South-East Asia is simple. It is the restoration of peace so that the peoples of that area can go about their own independent business in whatever asso- ciations they may freely choose for them- selves without interference from outside.

It is true. In its light, the American pre- conditions for a conference on Laos, first put by the Laotian neutralist Prime Minister, Souvanna Phouma, that the Pathet Lao first withdraw their troops at least some way and that the agenda be confined to Laos, are hardly unreasonable. Time and again the Americans have re- frained from the sort of retaliatory military action that, at least by the standards of the other side, would certainly be justified, only from an honourable reluctance to spread the conflict further.

Yet in spite of Mr. Stevenson one can believe that the West should be in South- East Asia both before and after the war is over, not just as military advisers but as part of the Peace Corps, of Voluntary Service Overseas and all those similar organisations that are springing up in other countries, be- cause the West has something to teach and share which South-East Asia wants to have. Indeed, it is now being recognised as the principal cause of American failure in Viet- nam that the Americans appear as no more than military advisers determined to keep going a war which wore out many of the Vietnamese people long ago.

There is some sign that the Americans are coming to see this themselves. This is one of the reasons behind their approach to their allies for non-military assistance; not only must the burden be shared, the Viet- namese must be shown that there are others than Americans behind them. It would be as foolish as it is easy for her allies not to listen. The Administration has by no means rejected neutralisation, but only some kind of Gaullist fantasy that would be as hope- lessly impractical to preserve as the present neutralisation of Laos. The Americans, of course, could always withdraw into isolation. But is this what either her friends or her allies really want?