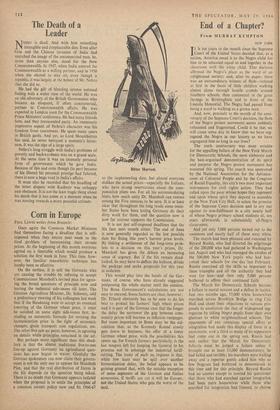 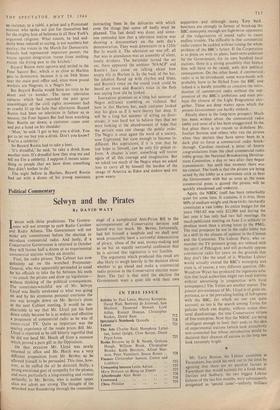 End of a Chapter?

Iis ten years to the month since the Supreme 'Court of the United States decided that, as a nation, America owed it to the Negro child for him to be educated equal to and together in the classroom with the white child. That decision aflirmed the Negro's place as the ward of an enlightened society; and, after its paper, there was an extraordinary witness of flesh—isolated at first in the faces of little children walking almost alone • through hostile crowds around Southern schools, then communal in the great throngs in Birmingham and in front of the Lincoln Memorial. The Negro had passed from being a ward to walking as a grown man.

And, now, precisely to the month of the anni- versary of the Supreme Court's decision, the flesh of the Negro protest movement seems suddenly exhausted and fragmented. Could it be that we will come some day to know that we have seg- regated the Negro in our history as we have segregated him so long in our lives?

The tenth anniversary was most notable for the appalling failure of the New York March for Democratic Schools, the most elaborate and the best-organised demonstration of its spirit and purpose the Negro protest movement has mounted this spring. The march was sponsored by the National Association for the Advance- ment of Coloured People and by the Congress of Racial Equality, this city's two most important instruments for civil rights action. They had called upon the poor whose hopes they represent and upon whose spirit they depend to assemble at the New York City Hall, to salute the promise of the Supreme Court decision and to cry out against its non-fulfilment in a city nearly half of whose Negro primary school students sit, ten years afterwards, in substantially all-Negro classrooms.

And yet only 5,000 persons turned out to the summons and nearly half of those were white.

The march had been planned and executed by Bayard Rustin, who had directed the pilgrimage of the 200,000 who had gathered in Washington last August and who had managed the exodus of the 500,000 New York pupils who had boy- cotted their schools for one day last February. Rustin exercised all the skills so important to these triumphs and all the authority they had won for him—and then only 5,000 persons bothered to affirm their continued faith.

The March for Democratic Schools became a failure in moral suasion and a defeat in tactics. Just two months ago, 15,000 white housewives marched across Brooklyn Bridge to ring City Hall and chant their objections to various pro- posals to ameliorate the fact of widespread seg- regation by taking Negro pupils from their own ghettoes to white neighbourhood schools. The opponents of any conscious special effort at integration had made this display of force in a snowstorm; now a third as many of its supporters had come out in the spring sun. Rustin had said earlier that the March for Democratic Schools must be judged a failure unless it brought out at least 15,000 demonstrators; he had failed and terribly; his marchers were trailing away and a reporter gently asked him why so few Negroes had bothered to demonstrate at this time and for this principle. Bayard Rustin had no answer except to remind his questioner that those who had marched against integration had been mere housewives while those who marched for integration had listened, to choose an instance, to a rabbi, a priest and a Protestant minister who spoke not just for themselves but for the mighty host of believers in all New York's organised religions. What counts, he had sud- denly been reduced to saying, is not numbers but quality; the voices in the March for Democratic Schools had represented important power; the voices against integration 'come from nothing except the frying pan in the kitchen.'

Bayard Rustin went uptown and settled in the Four Square Bar, which is as close as Harlem gets to downtown, because it is on 34th Street near the main post office and, since most postal workers are Negroes, is a Negro bar.

But Bayard Rustin would have no time to be alone and to wonder. The same television cameras which had recorded the past great assemblages of the civil rights movement had as cruelly lit up the hole that afternoon. Bayard Rustin had been on television in failure as in success; the Four Square Bar had been watching him. Rustin sat down; a customer came over and put a hand on his shoulder.

'It's dreadful,' he said, `to take a drink from another man. It's dreadful how they stop me and tell me I'm a celebrity. I suppose it means some- thing to people that we have done something they didn't bother to do.'

. The night before in Harlem, Bayard Rustin had sat with a dozen of his young assistants

instructing than in the delicacies with which even the things that come off badly must be planned. The last detail was done; and some- one reminded him that a television station was showing a documentary on the next day's demonstration. They went downstairs to a 125th Bar to watch it. The television set was off; all that was in attendance was an assembly of silent, lonely drinkers. The bartender turned the set on; there appeared the emblem 'NAACP' and Rustin's face came on talking about how empty life in Harlem is. In the back of the bar, the jukebox flared up with rhythm and blues, and Rustin's voice on the sound track could be heard no more and Rustin's voice in the flesh was saying how old he looked.

Journalism promises us a long hot summer of Negro militance trembling, on violence. But here in this Harlem bar, each customer looked into his glass as if it were twenty feet deep. It will be a long hot summer of sitting on door- stoops; it was hard not to belieVe then that we were looking at the abandonment of hope that the private man can change the public order. The Negro is once again the ward of a society, now frightened, but soon enough to become in- different. His aspirations, if it is true that he lost hope in himself, can be only for prison re- form. A chapter is over; something will revive again of all this courage and imagination. But we asked too much of the Negro when we asked him to carry all by himself the burden of the image of America as Eden and endure and not grow weary.