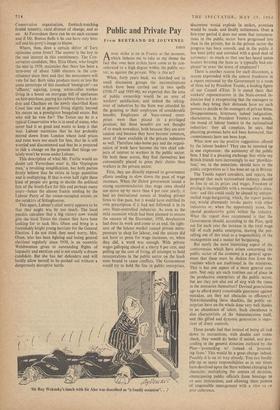 AA MAIL strike is on in France at the moment, which induces me to take as my theme the fact that 'over here strikes have come to be con- centrated to a high degree within the public sec- tor, as against the private. Why is this so?

When, forty years back, we sketched out in small discussion groups the nationalisations which have been carried out in two spells (1936-37 and 1945-46), we expected that the area of public ownership would be an area of workers' satisfaction; and indeed the taking- over of industries by the State was attended by the granting to their employees of considerable benefits. Employees of State-owned enter- prises were thus placed in a privileged position; but these benefits' are not thought of so much nowadays, both because they are now ancient and because they have become common, most of them available id the private industries as well. Therefore take-home pay and the organi- sation of work have become the two chief sub- jects of interest to workers in the public sector. On both these scores, they find themselves less conveniently placed to press their claims than workers in the private sector.

First, they are directly exposed to government efforts tending to slow down the pace of wage increases. When the Debre government issued a strong recommendation that wage rates should not move up by more than 4 per cent yearly, it had no institutional means of binding private firms to that pace, but it would have stultified its own prescription if it had not followed it in its own State-controlled industries. As soon as the mild recession which had been planned to ensure the success of the December, 1958, devaluation had done its work and come to an end, the tight- ness of the labour market caused private entre- preneurs to shop for labour, and the unions did not have to press for wage increases, or, when they did, a word was enough. With private wages galloping ahead at a merry 8 per cent, and pulling up the cost of living, all attempts to hold remunerations in the public sector on the leash were bound to cause conflicts. The Government would try to hold the line in public enterprises,

`Sir Roy Welensky's lunch with Sir Alec was described as "a family occasion". . discontent would explode in strikes, promises would be made, and finally settlements. Over a five-year period it does not seem that remunera- tions in the public sector have progressed less than in the private, but in the private sector the progress has been smooth, and in the public it has been jerky and attended with a good deal of acrimony: so much so that one has heard union leaders berating the State as 'a typically bad em- ployer' or even 'the worst of employers'

There is another reason for such discontent, a reason expounded with the utmost frankness in a report entrusted by the Government to a team of three led by President Toutee, a leading figure of our Conseil d'Etat. It is stated there that workers' representatives in the State-owned in- dustries find it exasperating that the managers to whom they bring their demands have no such powers to decide as the managers of private firms. Disappointment, bitterness, indeed indignation, characterise, in President Toutee's own words, the mood of labour leaders in the nationalised industries: they all complain, he says, that placating promises have not been honoured, that commitments have not been kept.

What now are the positive suggestions offered by the labour leaders? They can be summed up in one expression: the autonomy of the public firm. I find it a pleasing exchange that while my British friends turn increasingly to our 'planifica- tion,' we, in the meantime, should turn to the public corporation as it has been set up in Britain.

The Toutee report considers, and rejects, the proposal that each nationalised industry should be free to set its prices and wages. Freedom of pricing is incompatible with a monopolistic situa- tion: and this could easily be abused by untram- melled wage-bargaining, which, the report points out, would alternately invoke parity with other industries or, when the opportunity arose, the special productivity gains within the industry. What the report does recommend is that the Government should, according to the Plan, spell out for each year the increase in the total wage bill of each public enterprise, leaving the par- celling out of this total as a responsibility of the management and a matter for bargaining.

But surely the most interesting aspect of the controversies which have arisen concerning the public sector of the economy is a general agree- ment that these must be shaken free from the routines which are traditional in the ministries. This is but one aspect of a more general con- cern. Not only are such routines out of place in the productive enterprises of the public sector, but are they not also out of step with the times in the ministries themselves? Devised generations ago to afford every conceivable guarantee against mistakes, are they not obstacles to efficiency? Notwithstanding these shackles, the public en- terprises have on the whole done very well thanks to an abundance of talent. Such abundance is also characteristic of the Administration itself, and this gifted and dynamic generation is impa- tient of dusty controls.

Those people feel that instead of being all tied down to instructions, with double and treble check, they would do better if untied, and pro- ceeding in the general direction outlined by the Plan—'proceeding to' instead of 'proceed- ing from.' This would be a great change indeed. Possibly it is on its way already. You can hardly pile up as many responsibilities as in our times have devolved upon the State without changing its character, multiplying the centres of decision, emancipating public officials from bondage to cx ante instructions, and allowing them powers of responsible management with a view to cx post coherence.