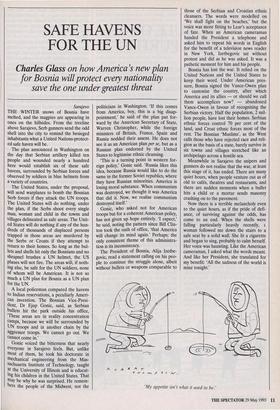 SAFE HAVENS FOR THE UN

Sarajevo THE WINTER snows of Bosnia have melted, and the magpies are appearing in ones on the hillsides. From the treeline above Sarajevo, Serb gunners send the odd shell into the city to remind the besieged inhabitants what a United Nations-protect- ed safe haven will be.

The plan announced in Washington on the day that Serbian artillery killed ten people and wounded nearly a hundred here would establish six of these safe havens, surrounded by Serbian forces and observed by soldiers in blue helmets from a variety of countries.

The United States, under the proposal, will send warplanes to bomb the Bosnian Serb forces if they attack the UN troops. The United States will do nothing, under the plan, if the Serbs shoot every single man, woman and child in the towns and villages delineated as safe areas. The Unit- ed States will do nothing if any of the hun- dreds of thousands of displaced persons trapped in those areas are murdered by the Serbs or Croats if they attempt to return to their homes. So long as the bul- lets and shells hit only the Bosnians and no shrapnel brushes a UN helmet, the US planes will not fire. The areas will, if noth- ing else, be safe for the UN soldiers, none of whom will be American. It is not so much a UN plan for Bosnia as a UN plan for the UN.

A local policeman compared the havens to Indian reservations, a peculiarly Ameri- can invention. The Bosnian Vice-Presi- dent, Dr Ejup Gonic, said, as Serbian bullets hit the park outside his office, `These areas are in reality concentration camps, because we will be surrounded by UN troops and in another chain by the aggressor troops. We cannot go out. We cannot come in.'

Gonic voiced the bitterness that nearly everyone in Sarajevo feels. But, unlike most of them, he took his doctorate in mechanical engineering from the Mas- sachusetts Institute of Technology, taught at the University of Illinois and is educat- ing his children in the United States. That may be why he was surprised. He remem- bers the people of the Midwest, not the politicians in Washington. `If this comes from America, boy, this is a big disap- pointment,' he said of the plan put for- ward by the American Secretary of State, Warren Christopher, while the foreign ministers of Britain, France, Spain and Russia nodded their assent. He does not see it as an American plan per se, but as a Russian plan endorsed by the United States to legitimise ethnic cleansing.

`This is a turning point in western for- eign policy,' Gonic said. 'Russia likes this idea, because Russia would like to do the same in the former Soviet republics, where they have Russian minorities. America is losing moral substance. When communism was destroyed, we thought it was America that did it. Now, we realise communism destroyed itself.' Gonic, who asked not for American troops but for a coherent American policy, has not given up hope entirely. 'I expect,' he said, noting the pattern since Bill Clin- ton took the oath of office, 'that America will change its mind again.' Perhaps: the only consistent theme of this administra- tion is its inconsistency.

The President of Bosnia, Alija Izetbe- govic, read a statement calling on his peo- ple to continue the struggle alone, albeit without bullets or weapons comparable to those of the Serbian and Croatian ethnic cleansers. The words were modelled on `We shall fight on the beaches,' but the voice was more fitting to Lear's acceptance of fate. When an American cameraman handed the President a telephone and asked him to repeat his words in English for the benefit of a television news reader in New York, Izetbegovic sat without protest and did as he was asked. It was a pathetic moment for him and his people.

Bosnia has lost the war. It relied on the United Nations and the United States to keep their word. Under American pres- sure, Bosnia signed the Vance-Owen plan to cantonise the country, after which America and its allies — or should we call them accomplices now? — abandoned Vance-Owen in favour of recognising the Serbian victory. Half the population, 2 mil- lion people, have lost their homes. Serbian ethnic forces control 70 per cent of the land, and Croat ethnic forces most of the rest. The Bosnian 'Muslims', as the West calls those who have rejected race and reli- gion as the basis of a state, barely survive in six towns and villages stretched like an archipelago across a hostile sea.

Meanwhile in Sarajevo the snipers and gunners do not realise that the war, at least this stage of it, has ended. There are many quiet hours, when people venture out as of old to cafés, theatres and restaurants, and there are sudden moments when a bullet hits a child or a mortar sends masonry crashing on to the pavement.

Now there is a terrible melancholy even to the quiet hours, as if the pride of defi- ance, of surviving against the odds, has come to an end. When the shells were falling particularly heavily recently, a woman followed me down the stairs to a safe seat by a solid wall. She lit a cigarette and began to sing, probably to calm herself. Her voice was haunting. Like the American cameraman, I asked what the words meant. And like her President, she translated for my benefit: `All the sadness of the world is mine tonight.'

'My appetite isn't what it used to be.'