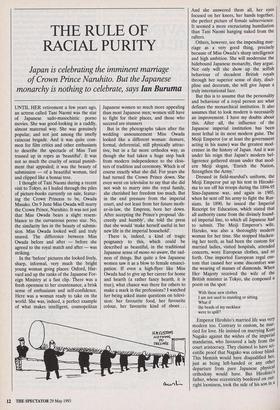 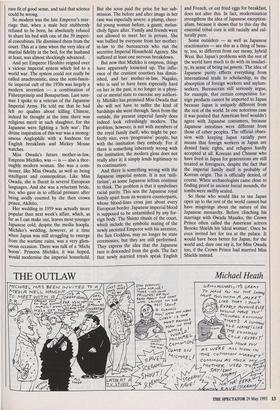 THE RULE OF RACIAL PURITY

Japan is celebrating the imminent marriage of Crown Prince Naruhito. But the Japanese monarchy is nothing to celebrate, says Ian Buruma UNTIL HER retirement a few years ago, an actress called Tani Naomi was the star of Japanese sado-masochistic porno movies. She was good-looking in a cuddly, almost maternal way. She was genuinely popular, and not just among the smelly raincoat brigade. And it was quite com- mon for film critics and other enthusiasts to describe the spectacle of Miss Tani trussed up in ropes as 'beautiful'. It was not so much the cruelty of sexual punish- ment that appealed; it was the beauty of submission — of a beautiful woman, tied and clipped like a bonsai tree.

In the 'before' pictures she looked lively, sharp, informal, very much the bright young woman going places: Oxford, Har- vard and up the ranks of the Japanese For- eign Ministry at a fast clip. There was a fresh openness to her countenance, a brisk sense of enthusiasm and self-confidence. Here was a woman ready to take on the world. She was, indeed, a perfect example of what makes intelligent, cosmopolitan Japanese women so much more appealing than most Japanese men; women still have to fight for their places, and those who succeed are stunners But in the photographs taken after the wedding announcement Miss Owada looked like a different woman: demure, formal, deferential, still physically attrac- tive, but in a far more orthodox way, as though she had taken a huge step back from modern independence to the clois- ters of tradition and ceremony. Which is of course exactly what she did. For years she had turned the Crown Prince down. She even went on television to say that she did not wish to many into the royal family, she cherished her freedom too much. But in the end pressure from the imperial court, and not least from her future moth- er-in-law, the Empress, bore her down. After accepting the Prince's proposal 'dis- creetly and humbly', she told the press that she would 'make herself useful in her new life in the imperial household'.

There is, indeed, a kind of tragic poignancy to this, which could be described as beautiful, in the traditional Japanese sense of mono no aware, the sad- ness of things. But quite a few Japanese women saw it as a blow to female emanci- pation. If even a high-flyer like Miss Owada had to give up her career for home and hearth (a rather fancy hearth, it is true), what chance was there for others to make a mark in the professions? I watched her being asked inane questions on televi- sion: her favourite food, her favourite colour, her favourite kind of shoes . And she answered them all, her eyes focused on her knees, her hands together, the perfect picture of female subservience. It seemed a more excruciating humiliation than Tani Naomi hanging naked from the rafters.

Others, however, see the impending mar- riage as a very good thing, precisely because of Miss Owada's sharp intelligence and high ambition. She will modernise the hidebound Japanese monarchy, they argue. Not only will she show up the selfish behaviour of decadent British royals through her superior sense of duty, disci- pline and decorum, she will give Japan a truly international face.

But this is to assume that the personality and behaviour of a royal person are what defines the monarchical institution. It also assumes that to look modern is necessarily an improvement. I have my doubts about this. After all, the influence of the Japanese imperial institution has been most lethal in its most modern guise. The Meiji Emperor (or at least the government acting in his name) was the greatest mod- erniser in the history of Japan. And it was under his reign that Japan's modern bel- ligerence gathered steam under that mod- ern Meiji slogan, 'Enrich the Nation, Strengthen the Army.'

Dressed in field-marshal's uniform, the Meiji Emperor put up his tent in Hiroshi- ma to see off his troops during the 1894-95 Sino-Japanese war, and again in 1905, when he sent off his army to fight the Rus- sians. In 1890, he issued the Imperial Rescript for Education, which stated that all authority came from the divinely found- ed imperial line, to which all Japanese had to submit. The Meiji Emperor's wife, Haruko, was also a thoroughly modern woman for her time. She stopped blacken- ing her teeth, as had been the custom for married ladies, visited hospitals, attended concerts, wore European clothes, and so forth. One imported European regal cus- tom that caused her some discomfort was the wearing of masses of diamonds. When Her Majesty received the wife of the British minister in Tokyo, she composed a poem on the spot:

With these new clothes

I am not used to standing or sitting.

What if the beads of my necklace

Emperor Hirohito's married life was very modern too. Contrary to custom, he mar- ried for love. He insisted on marrying Kuni Nagako against the wishes of the imperial mandarins, who favoured a lady from the court aristocracy. They claimed to have sci- entific proof that Nagako was colour blind. This blemish would have disqualified just as being left-handed or any other departure from pure Japanese physical orthodoxy would have. But Hirohito father, whose eccentricity bordered on out- right looniness, took the side of his son m a rare fit of good sense, and said that science could be wrong.

So modern was the late Emperor's mar- riage that, when a male heir stubbornly refused to be born, he absolutely refused to share his bed with one of the 39 imperi- al concubines. He dismissed them from the court. This at a time when the very idea of marital fidelity in the bed, for the husband at least, was almost shockingly advanced.

And yet Emperor Hirohito reigned over a vicious imperial system which led to a world war. The system could not really be called anachronistic, since the semi-fascis- tic imperial cult of the 1930s was largely a modern invention — a combination of Fiihrerprinzip and Bonapartism. Last sum- mer I spoke to a veteran of the Japanese Imperial Army. He told me that he had felt no qualms about killing Chinese, indeed he thought at the time there was religious merit in such slaughter, for the Japanese were fighting a 'holy war'. The divine inspiration of this war was a monog- amous Anglophile with a fondness for English breakfasts and Mickey Mouse watches.

Miss Owada's future mother-in-law, Empress Michiko, was — is — also a thor- oughly modern woman. She was a com- moner, like Miss Owada, as well as being intelligent and cosmopolitan. Like Miss Owada, she is fluent in several European languages. And she was a reluctant bride, too, who gave in to official pressure after being avidly courted by the then crown prince, Akihito.

Her wedding in 1959 was actually more Popular than next week's affair, which, as far as I can make out, leaves most younger Japanese cold, despite the media hoopla. Michiko's wedding, however, at a time when Japan was still struggling to emerge from the wartime ruins, was a very glam- orous occasion. There was talk of a `Michi boom'. Princess Michiko, it was hoped, would modernise the imperial household. But she soon paid the price for her sub- mission. The before and after image in her case was especially severe: a plump, cheer- ful young woman before, a gaunt, melan- choly figure after. Family and friends were not allowed to meet her in private. She was bullied by everyone from her mother- in-law to the bureaucrats who run the secretive Imperial Household Agency. She suffered at least one nervous breakdown.

But now that Michiko is empress, things have apparently loosened up. The influ- ence of the crustiest courtiers has dimin- ished, and her mother-in-law, Nagako, who is said to have been especially hard on her in the past, is no longer in a physi- cal or mental state to exercise any authori- ty. Michiko has promised Miss Owada that she will not have to suffer the kind of hardships she went through. Seen from the outside, the present imperial family does indeed look refreshingly modern. The problem, however, is not with members of the royal family itself, who might be per- fectly nice, even 'progressive' people, but with the institution they embody. For if there is something inherently wrong with the institution, the modern gloss does not really alter it; it simply lends legitimacy to its continuation.

And there is something wrong with the Japanese imperial system. It is not 'mili- tarism', as some Japanese leftists continue to think. The problem is that it symbolises racial purity. This sets the Japanese royal family apart from its western counterparts, whose blood-lines cross just about every European border. Japanese imperial blood is supposed to be untarnished by any for- eign body. The Shinto rituals of the court, which include the symbolic mating of the newly anointed Emperor with his ancestor, the Sun Goddess, may no longer be state ceremonies, but they are still performed. They express the idea that the Japanese race is descended from the gods. The fact that newly married royals speak English and French, or eat fried eggs for breakfast, does not alter this. In fact, modernisation strengthens the idea of Japanese exception- alism, because it shows that to this day the essential tribal core is still racially and cul- turally pure.

Some outsiders — as well as Japanese reactionaries — see this as a thing of beau- ty, too, so different from our messy, hybrid West. But Japan's problems with the rest of the world have much to do with its insulari- ty, its sense of being sui generis. The idea of Japanese purity effects everything from international trade to scholarship, to the absorption of foreign workers and asylum- seekers. Bureaucrats still seriously argue, for example, that certain competitive for- eign products cannot be imported to Japan because Japan is uniquely different from the rest of the world. In one notorious case it was posited that American beef wouldn't agree with Japanese consumers, because Japanese intestines were different from those of other peoples. The official obses- sion with keeping Japan racially pure means that foreign workers in Japan are denied basic rights, and refugees hardly accepted at all. Koreans and Chinese who have lived in Japan for generations are still treated as foreigners, despite the fact that the imperial family itself is probably of Korean origin. This is officially denied, of course. When archaeologists came close to finding proof in ancient burial mounds, the tombs were swiftly sealed.

So those who would like to see Japan open up to the rest of the world cannot but have misgivings about the nature of the Japanese monarchy. Before clinching his marriage with Owada Masako, the Crown Prince often called the American actress Brooke Shields his 'ideal woman'. Once he even invited her for tea at the palace. It would have been better for Japan, for the world and, dare one say it, for Miss Owada too, if the Crown Prince had married Miss Shields instead.