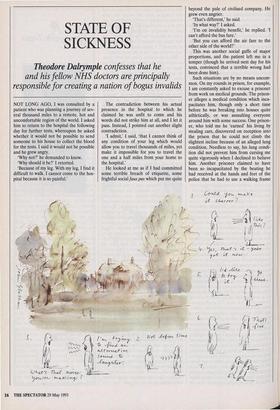 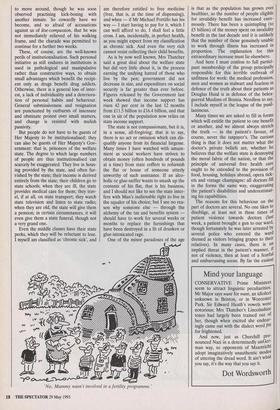 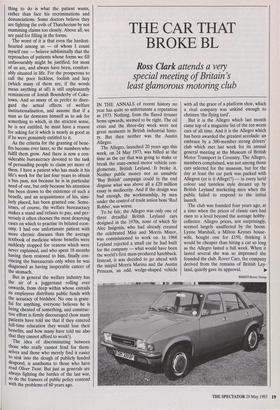 NOT LONG AGO, I was consulted by a patient who was planning a journey of sev- eral thousand miles to a remote, hot and uncomfortable region of the world. I asked him to return to the hospital the following day for further tests, whereupon he asked whether it would not be possible to send someone to his house to collect the blood for the tests. I said it would not be possible and he grew angry.

`Why not?' he demanded to know.

`Why should it be?' I retorted.

`Because of my leg. With my leg, I find it difficult to walk. I cannot come to the hos- pital because it is so painful.' The contradiction between his actual presence in the hospital to which he claimed he was unfit to come and his words did not strike him at all, and I let it pass. Instead, I pointed out another slight contradiction.

`I admit,' I said, 'that I cannot think of any condition of your leg which would allow you to travel thousands of miles, yet make it impossible for you to travel the one and a half miles from your home to the hospital.'

He looked at me as if I had committed some terrible breach of etiquette, some frightful social faux pas which put me quite

beyond the pale of civilised company. He grew even angrier.

`I'm on invalidity benefit,' he replied. 'I can't afford the bus fare.'

Tut you can afford the air fare to the other side of the world?'

This was another social gaffe of major proportions, and the patient left me in a temper (though he arrived next day for his tests, convinced that a terrible wrong had been done him).

Such situations are by no means uncom- mon. On my rounds in prison, for example, I am constantly asked to excuse a prisoner from work on medical grounds. The prison- er alleges a medical condition which inca- pacitates him, though only a short time before he was breaking into houses quite athletically, or was assaulting everyone around him with some success. One prison- er, who told me he 'earned' his living by stealing cars, discovered on reception into the prison that he could not climb the slightest incline because of an alleged lung condition. Needless to say, his lung condi- tion did not prevent him from cursing me quite vigorously when I declined to believe him. Another prisoner claimed to have been so incapacitated by the beating he had received at the hands and feet of the police that he had to use a walking frame

to move around, though he was soon observed practising kick-boxing with another inmate. So cowardly have we become, and so afraid of accusations against us of !rile-compassion, that he was not immediately relieved of his walking frame, and the charade was permitted to continue for a further two weeks.

These, of course, are the well-known perils of institutionalisation. Such personal initiative as still endures in institutions is used in pathological and manipulative rather than constructive ways, to obtain small advantages which benefit the recipi- ent only as drugs benefit drug addicts. Otherwise, there is a general loss of inter- est, a lack of individuality and a deteriora- tion of personal habits and behaviour. General submissiveness and resignation are punctuated by outbursts of insensate and obstinate protest over small matters, and change is resisted with mulish passivity.

But people do not have to be guests of Her Majesty to be institutionalised; they can also be guests of Her Majesty's Gov- ernment: that is, prisoners of the welfare state. The degree to which large numbers of people are thus institutionalised can scarcely be exaggerated. They live in hous- ing provided by the state, and often fur- nished by the state; their income is derived entirely from the state; their children go to state schools; when they are ill, the state provides medical care for them; they trav- el, if at all, on state transport; they watch state television and listen to state radio; when they are old, the state will give them a pension; in certain circumstances, it will even give them a state funeral, though not a very grand one.

Even the middle classes have their state perks, which they will be reluctant to lose. I myself am classified as 'chronic sick', and am therefore entitled to free medicine (free, that is, at the time of dispensing), and when — if Mr Michael Portillo has his way — I start having to pay for it, which I can well afford to do, I shall feel a little cross. I am, incidentally, in perfect health, as you might expect from my classification as chronic sick. And even the very rich cannot resist collecting their child benefits.

As is by now well known, Mrs Thatcher said a great deal about the welfare state but did very little about it, in the process earning the undying hatred of those who live by the pen; government did not decrease in size, and expenditure on social security is far greater than ever before. Figures released by the Government last week showed that income support has risen 42 per cent in the last 12 months from £11.5 billion to £16.4 billion, and that one in six of the population now relies on state income support.

The state is not compassionate, but it is, in a sense, all-forgiving; that is to say, there is no act or omission which can dis- qualify anyone from its financial largesse. Many times I have watched with amaze- ment as social workers have striven to obtain money (often hundreds of pounds at a time) from state coffers to refurnish the flat or house of someone utterly unworthy of such assistance. If an alco- holic or glue-sniffer Wants to smash up the contents of his flat, that is his business,. and I should not like to see the state inter- fere with Man's inalienable right to live in the squalor of his choice; but I see no rea- son why someone else — through the alchemy of the tax and benefits system should have to work for several weeks or months to replace the furnishings that have been destroyed in a fit of drunken or glue-intoxicated rage.

One of the minor paradoxes of the age 'No, Mummy wasn't involved in a fertility programme.' is that as the population has grown ever healthier, so the number of people eligible for invalidity benefit has increased enor- mously. There has been a quintupling (to £5 billion) of the money spent on invalidity benefit in the last decade and it is unlikely that the number of those genuinely unable to work through illness has increased in proportion. The explanation for this extraordinary increase must lie elsewhere.

And here I must confess to full partici- pant membership of the group principally responsible for this terrible outbreak of unfitness for work: the medical profession, men and women as stalwart and fearless in defence of the truth about their patients as Douglas Hurd is in defence of the belea- guered Muslims of Bosnia. Needless to say, I include myself in the league of the pusil- lanimous.

Many times we are asked to fill in forms which will entitle the patient to one benefit or another, and we almost always stretch the truth — in the patient's favour, of course, never the taxpayer's. The curious thing is that it does not matter what the doctor's private beliefs are, whether he believes that the welfare state is destroying the moral fabric of the nation, or that the principle of universal free health care ought to be extended to the provision of food, housing, holidays abroad, opera tick- ets and vintage champagne: all doctors fill in the forms the same way, exaggerating the patient's disabilities and underestimat- ing his capabilities. The reasons for this behaviour on the part of doctors are several. No one likes to disoblige, at least not in these times of patient violence towards doctors (last week, a patient brought a gun to our ward, though fortunately he was later arrested by several police who entered the ward dressed as visitors bringing grapes to their relatives). In many cases, there is an implied threat in the patient's manner, if not of violence, then at least of a fearful and embarrassing scene. By far the easiest thing to do is what the patient wants, rather than face his recriminations and denunciations. Some doctors believe they are fighting the evils of Thatcherism by not examining claims too closely. Above all, we are paid for filling in the forms.

The worst of it is that even the hardest- hearted among us — of whom I count myself one — believe subliminally that the reproaches of patients whose forms we fill unfavourably might be justified, for most of us are, and always have been, comfort- ably situated in life. For the prosperous to call the poor feckless, foolish and lazy (which many of them are, if the words mean anything at all) is still unpleasantly reminiscent of Josiah Bounderby of Coke- town. And so many of us prefer to disre- gard the actual effects of welfare institutionalisation, and assume that if a man so far demeans himself as to ask for something to which, in the strictest sense, he is not entitled, he must have a reason for asking for it which is nearly as good as if he were genuinely entitled to it.

As the criteria for the granting of bene- fits become ever laxer, so the numbers who fulfil them grow. And there is now a con- siderable bureaucracy devoted to the task of persuading people to claim yet more of them. I have a patient who has made it his life's work for the last four years to obtain a bus pass, not because he is in particular need of one, but only because his attention has been drawn to the existence of such a benefit, and an acquaintance of his, simi- larly placed, has been granted one. Some- times, of course, the welfare bureaucracy makes a stand and refuses to pay, and per- versely it often chooses the most deserving cases on which to practise its belated econ- omy. I had one unfortunate patient with more chronic diseases than the average textbook of medicine whose benefits were suddenly stopped for reasons which were never explained, and who spent 18 months having them restored to him, finally con- vincing the bureaucrats only when he was diagnosed as having inoperable cancer of the stomach.

But in general the welfare industry has the air of a juggernaut rolling ever onwards, from deep within whose entrails its employees distribute public funds with the accuracy of birdshot. No one is grate- ful for anything, everyone believes he is being cheated of something, and construc- tive effort is firmly discouraged (how many patients have told me that if they entered full-time education they would lose their benefits, and how many have told me also that they cannot afford to work!). The idea of discriminating between those who really cannot fend for them- selves and those who merely find it easier to sink into the slough of publicly funded despond, is anathema to those who have read Oliver Twist. But just as generals are always fighting the battles of the last war, so do the framers of public policy contend with the problems of 60 years ago.