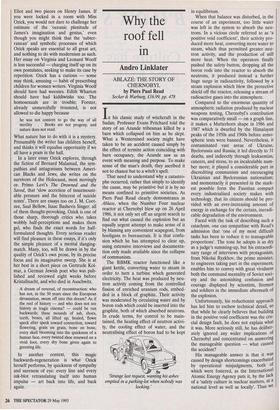 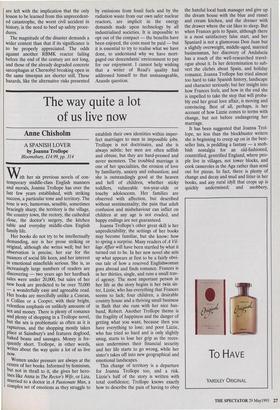 Why the roof fell in

ABLAZE: THE STORY OF CHERNOBYL by Piers Paul Read Seeker & Warburg, f16.99, pp. 478 In his classic study of witchcraft in the Sudan, Professor Evans Pritchard told the story of an Azande tribesman killed by a barn which collapsed on him as he slept. What a Westernised society might have taken to be an accident caused simply by the effect of termite action coinciding with barn occupancy, the Azande saw as an event with meaning and purpose. To make sense of the man's death, they ascribed it not to chance but to a witch's spell.

That need to understand why a catastro- phe occurred, rather that simply to identify the cause, may be primitive but it is by no means confined to primitive societies. As Piers Paul Read clearly demonstrates in Ablaze, when the Number Four nuclear reactor at Chernobyl blew up on 26 April 1986, it not only set off an urgent search to find out what caused the explosion but an equally urgent attempt to make sense of it by blaming any convenient scapegoat, from hooligans to bureaucrats. It is that confu- sion which he has attempted to clear up, using extensive interviews and documenta- tion only made available since the collapse of communism.

The RBMK reactor functioned like a giant kettle, converting water to steam in order to turn a turbine which generated electricity. The heat was produced by neu- tron activity coming from the controlled fission of enriched uranium rods, embed- ded in a block of graphite. Their activity was moderated by circulating water and by boron rods which could be inserted into the graphite, both of which absorbed neutrons. In crude terms, for control to be main- tained, the heating effect of neutron activi- ty, the cooling effect of water, and the neutralising effect of boron had to be kept Strange last request, wanting his ashes emptied in a parking-lot when nobody was looking.' in equilibrium.

When that balance was disturbed, in the course of an experiment, too little water was left in the system to absorb the neu- trons. In a vicious circle referred to as 'a positive void coefficient', their activity pro- duced more heat, converting more water to steam, which thus permitted greater neu- tron activity, and the production of still more heat. When the operators finally pushed the safety button, dropping all the boron rods into the reactor to absorb the neutrons, it produced instead a further huge surge in radioactivity, followed by a steam explosion which blew the protective shield off the reactor, releasing a stream of radioactive gases into the atmosphere.

Compared to the enormous quantity of atmospheric radiation produced by nuclear weapons testing, Chernobyl's contribution was comparatively small — on a graph line, it makes a Matterhorn shape in 1986 and 1987 which is dwarfed by the Himalayan peaks of the 1950s and 1960s before atmo- spheric tests were banned. Nevertheless, it contaminated vast areas of Ukraine, Byelorussia and Russia; it led directly to 31 deaths, and indirectly through leukaemias, cancers, and stress, to an incalculable num- ber more; it played a considerable part in discrediting communism and encouraging Ukrainian and Byelorussian nationalism; and momentarily it presented in the stark- est possible form the Faustian compact every industrialised society makes with technology, that its citizens should be pro- vided with an ever-increasing amount of energy in exchange for the certain, ineradi- cable degradation of the environment.

Faced with the task of describing such a cataclysm, one can sympathise with Read's admission that 'one of my most difficult tasks has been to reduce it to manageable proportions'. The tone he adopts is as dry as a judge's summing-up, but his extraordi- nary range of interviews with protagonists, from Nikolai Ryzkhov, the prime minister, to engineers taking part in the experiment, enables him to convey with great vividness both the command mentality of Soviet soci- ety and the astonishing confusion and courage displayed by scientists, firemen and soldiers in the immediate aftermath of the explosion. Unfortunately, his reductionist approach has led him to eschew technical detail, so that while he clearly believes that building in the positive void coefficient was the cru- cial design fault, he does not explain what it was. More seriously still, he has deliber- ately ignored any wider implications of Chernobyl and concentrated on answering the manageable question — what caused the accident?

His manageable answer is that it was caused by design shortcomings exacerbated by operational misjudgments, both of which were fostered, as the International Atomic Energy Agency puts it, by the lack of a 'safety culture in nuclear matters, at a national level as well as locally'. Thus we are left with the implication that the only lesson to be learned from this unprecedent- ed catastrophe, the worst civil accident in history, is the need to beef up safety proce- dures.

The magnitude of the disaster demands a wider context than that if its significance is to be properly appreciated. The odds against another RBMK reactor failing before the end of the century are not long, and those of the already degraded concrete sarcophagus at Chernobyl breaking open in the same timespan are shorter still. These hazards, like the alternative risks presented by emissions from fossil fuels and by the radiation waste from our own safer nuclear reactors, are implicit in the energy demands made upon technology by all industrialised societies. It is impossible to opt out of the compact — the benefits have been enjoyed, the costs must be paid — but it is essential to try to realise what we have done, to understand why we have mort- gaged our descendants' environment to pay for our enjoyment. I cannot help wishing that a writer of Read's quality had addressed himself to that unmanageable, Azande question.