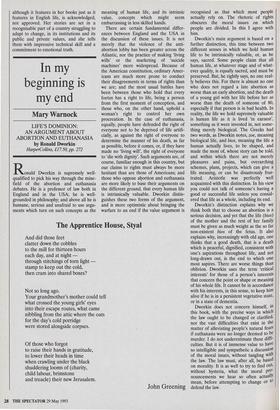 In my beginning is my end

LIFE'S DOMINION: AN ARGUMENT ABOUT ABORTION AND EUTHANASIA by Ronald Dworkin HarperCollins, £17.50, pp. 272 Ronald Dworkin is supremely well- qualified to pick his way through the mine- field of the abortion and euthanasia debates. He is a professor of law both in England and in the USA; he is well- grounded in philosophy; and above all he is humane, serious and unafraid to use argu- ments which turn on such concepts as the meaning of human life, and its intrinsic value, concepts which might seem embarrassing in less skilled hands.

There are certain fundamental differ- ences between England and the USA in the discussion of these issues. It is not merely that the violence of the anti- abortion lobby has been greater across the Atlantic, nor the practice of making 'living wills' or the marketing of 'suicide machines' more widespread. Because of the American constitution, ordinary Amer- icans are much more prone to conduct their disagreements in terms of rights than we are; and the most usual battles have been between those who hold that every foetus has a right to life, being a person from the first moment of conception, and those who, on the other hand, uphold a woman's right to control her own procreation. In the case of euthanasia, equally, people have defended the right of everyone not to be deprived of life artifi- cially, as against the right of everyone to determine the manner of his death, as far as possible, before it comes, or, if they have made no 'living will', the right of everyone to 'die with dignity'. Such arguments are, of course, familiar enough in this country, but our claims to rights must always be more hesitant than are those of Americans; and those who oppose abortion and euthanasia are more likely to base their arguments on the different ground, that every human life is intrinsically valuable. Dworkin distin- guishes these two forms of the argument, and is more optimistic about bringing the warfare to an end if the value argument is recognised as that which most people actually rely on. The rhetoric of rights obscures the moral issues on which people are divided. In this I agree with him.

Dworkin's main argument is based on a further distinction, this time between two different senses in which we hold human life to be intrinsically valuable, or, as he says, sacred. Some people claim that all human life, at whatever stage and of what- ever quality, is equally sacred, and must be preserved. But, he rightly says, no one real- ly believes this. For there is almost no one who does not regard a late abortion as worse than an early abortion, and the death of a young girl with her life before her as worse than the death of someone of 80, especially if that person is in bad health. In reality, the life we hold supremely valuable is human life as it is lived 'in earnest', something as it were invested in, not some- thing merely biological. The Greeks had two words, as Dworkin notes, zoe, meaning biological life, and bios, meaning the life a human actually lives, to be shaped, and made the most of, whose story can be told, and within which there are not merely pleasures and pains, but overarching schemes, plans, projects, which can give a life meaning, or can be disastrously frus- trated. Aristotle was perfectly well acquainted with this distinction. In his view you could not talk of someone's having a good or successful life unless you consid- ered that life as a whole, including its end.

Dworkin's distinction explains why we think both that to choose an abortion is a serious decision, and yet that the life (bios) of the mother and the rest of her family must be given as much weight as the so far non-existent bios of the fetus. It also explains why, increasingly with old age, one thinks that a good death, that is a death which is peaceful, dignified, consistent with one's aspirations throughout life, and not long-drawn out, is the end to which one most aspires. There are worse things than oblivion. Dworkin uses the term 'critical interests' for those of a person's interests that concern the point or shape or meaning of his whole life. It cannot be in accordance with his interests, in this sense, to keep him alive if he is in a persistent vegetative state, or in a state of dementia.

Dworkin does not concern himself, in this book, with the precise ways in which the law ought to be changed or clarified, nor the vast difficulties that exist in the matter of alleviating people's natural fears if euthanasia were no longer deemed to be murder. I do not underestimate these diffi- culties. But it is of immense value to have so intelligible and sympathetic a discussion of the moral issues, without tangling with the law. The law must, after all, be based on morality. It is as well to try to find out, without hysteria, what the moral pro- nouncements we hear so often actually mean, before attempting to change or to defend the law.