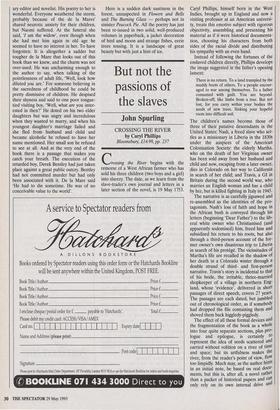 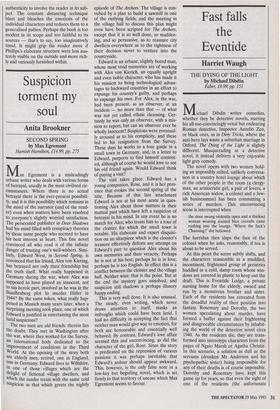 But not the passions of the slaves

CROSSING THE RIVER by Caryl Phillips Bloomsbury, £14.99, pp. 237 Crossing the River begins with the remorse of a West African farmer who has sold his three children (two boys and a girl) into slavery. The date, as we learn from the slave-trader's own journal and letters in a later section of the novel, is 19 May 1753 Caryl Phillips, himself born in the West Indies, brought up in England and now a visiting professor at an American universi- ty, treats this emotive subject with rigorous objectivity, assembling and presenting his material as if it were historical documenta- tion, choosing his characters from both sides of the racial divide and distributing his sympathy with an even hand.

Instead of following the fortunes of the enslaved children directly, Phillips develops the image suggested in the father's opening lament:

There is no return. To a land trampled by the muddy boots of others. To a people encour- aged to war among themselves. To a father consumed with guilt. You are beyond. Broken-off, like limbs from a tree. But not lost, for you carry within your bodies the seeds of new trees. Sinking your hopeful roots into difficult soil.

The children's names become those of three of their putative descendants in the United States: Nash, a freed slave who set- tles as a missionary in Liberia in the 1830s under the auspices of the American Colonisation Society: the elderly Martha, who on the death of her Virginian owner has been sold away from her husband and child and now, escaping from a later owner, dies in Colorado on her way to California in search of her child; and Travis, a GI in Britain during the second world war, who marries an English woman and has a child by her, but is killed fighting in Italy in 1945.

The narrative is as carefully jigsawed and re-assembled as the identities of the pro- tagonists. Nash's loss of faith and hope in the African bush is conveyed through his letters (beginning 'Dear Father') to the lib- eral white owner who Christianised (and apparently sodomised) him, freed him and subsidised his return to his roots, but also through a third-person account of the for- mer owner's own disastrous trip to Liberia in search of his protégé. The vicissitudes of Martha's life are recalled in the shadow of her death in a Colorado winter through a double strand of third- and first-person narrative. Travis's story is incidental to that of his bride, the irritable, thrice-married shopkeeper of a village in northern Eng- land, whose 'evidence', delivered in shod passages of direct speech, covers 27 years. The passages are each dated, but jumbled out of chronological order, as if somebody had dropped the file containing them and shoved them back higgledy-piggledy. The effect of all these formal devices and the fragmentation of the book as a whole into four quite separate sections, plus pro- logue and epilogue, is certainly to represent the idea of seeds scattered and carried without volition on a river of time and space; but its artfulness makes the river, from the reader's point of view, flow too limpidly. Much may, as the author hints in an initial note, be based on real docu- ments, but this is, after all, a novel rather than a packet of historical papers and can only rely on its own internal drive and authenticity to involve the reader in its sub- ject. The constant distancing technique blurs and bleaches the emotions of the individual characters and reduces them to a generalised pathos. Perhaps the book is too modest in its scope and too faithful to its sources — that's to say, too imaginatively timid. It might grip the reader more if Phillips's elaborate structure were less aus- terely visible on the outside and more rich- ly and variously furnished within.