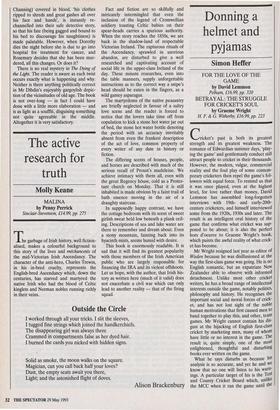 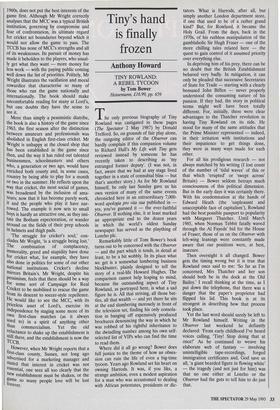 Donning a helmet and pyjamas

FOR THE LOVE OF THE GAME by David Lemmon Pelham, £16.99, pp. 320 BETRAYAL : THE STRUGGLE FOR CRICKET'S SOUL br G ra e m e Wright H. F. & G. Witherby, £16.99, pp. 223 Cricket's past is both its greatest strength and its greatest weakness. The romance of Edwardian summer days, 'play- ing the game' and gentlemanly conduct still attract people to cricket in their thousands. However, the modern, vulgar, commercial reality and the foul play of some contem- porary cricketers then repel the game's fol- lowers with equal force. To remind us that it was once played, even at the highest level, for love rather than money, David Lemmon has assembled long-forgotten interviews with 19th- and early-20th- century cricketers, and himself interviewed some from the 1920s, 1930s and later. The result is an intelligent oral history of the game that confirms what cricket was sup- posed to be about; it is also the perfect hors d'oeuvre to Graeme Wright's book, which paints the awful reality of what crick- et has become.

Mr Wright resigned last year as editor of Wisden because he was disillusioned at the way the first-class game was going. He is no English romantic, but an expatriate New Zealander able to observe with informed detachment. Unlike most other cricket writers, he has a broad range of intellectual interests outside the game, notably politics, philosophy and history. He recognises the important social and moral forces of crick- et, and has not lost sight of the noble human motivations that first caused men to band together to play this, and other, team games. Mr Wright cannot contain his dis- gust at the hijacking of English first-class cricket by marketing men, many of whom have little or no interest in the game. The result is, quite simply, one of the most enlightened, thoughtful and disturbing books ever written on the game. What he says disturbs us because his analysis is so accurate, and yet he and we know that no one will listen to his warn- ings. A particular target of his is the Test and County Cricket Board which, unlike the MCC when it ran the game until the 1960s, does not put the best interests of the game first. Although Mr Wright correctly analyses that the MCC was a typical British institution, governing by compromise and fear of confrontation, its ultimate regard for cricket set boundaries beyond which it would not allow the game to pass. The TCCB has none of MCC's strengths and all of its weaknesses. Its pursuit of money has made it beholden to the players, who usual- ly get what they want — more money for less work — with the paying public coming well down the list of priorities. Politely, Mr Wright illustrates the vacillation and moral cowardice that characterise so many of those who run the game nationally and internationally. The book should make uncomfortable reading for many at Lord's, but one doubts they have the sense to see it.

More than simply a pessimistic diatribe, the book is also a history of the game since 1963, the first season after the distinction between amateurs and professionals was abolished in English first-class cricket. Mr Wright is unhappy at the closed shop that has been established in the game since then, and the way it has ruled out talented businessmen, schoolmasters and others who, a generation or two ago, would have enriched both county and, in some cases, country by being able to play for a month or two in the summer. He reflects upon the way that cricket, the most social of games, was broadened by the inclusion of ama- teurs; now that it has become purely work, it and the people who play it have nar- rowed. The example it now sets to small boys is hardly an attractive one, as they imi- tate the Botham expectoration, or wander around on the fields of their prep schools in helmets and thigh pads.

`The struggle for cricket's soul,' con- cludes Mr Wright, 'is a struggle being lost.' The combination of complacency, immorality, greed and stupidity have done for cricket what, for example, they have also done in politics for some of our other national institutions. Cricket's decline mirrors Britain's. Mr Wright, despite his pessimism, feels that there should be a way for some sort of Campaign for Real Cricket to be mobilised to rescue the game from its descent to soccer-style repellence. He would like to see the MCC, with its priceless asset of Lord's, exercise its independence by staging some more of its Own first-class matches (as it always used to) in a spirit of anything other than commercialism. Yet the old reluctance to shake up the establishment is still there, and the establishment is now the TCCB.

However, when Mr Wright reports that a first-class county, Sussex, not long ago advertised for a marketing manager and stated that interest in cricket was not essential, one sees all too clearly that the new establishment must be shaken, or the game so many people love will be lost forever.